U.S. advisory group lays out detailed recommendations on how to prioritize Covid-19 vaccine 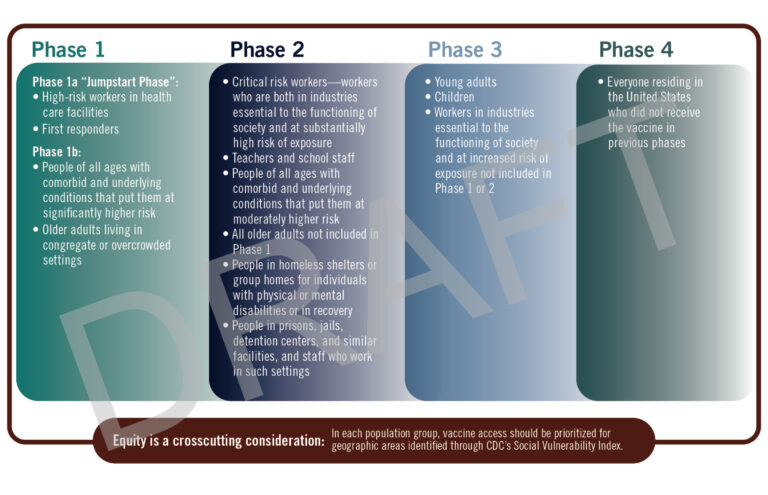 A new report that aims to prioritize groups to receive Covid-19 vaccine lays out detailed recommendations on who should be at the front of the line, starting with health care workers in high-risk settings, followed by adults of any age who have medical conditions that put them at significantly higher risk of having severe disease.

Also toward the front of the line would be older adults living in long-term care homes or other crowded settings.

The draft report, which runs 114 pages, was released Tuesday by the National Academies of Sciences, Engineering, and Medicine, which was tasked with the work by Francis Collins, director of the National Institutes of Health, and Robert Redfield, director of the Centers for Disease Control and Prevention.

A virtual public meeting on the recommendations will be held Wednesday afternoon, and the committee’s final report will be submitted later in September.

When Covid-19 vaccines are approved for use, initial supplies will be tight — potentially in the tens of millions of doses. Most of the vaccines under development will require two doses per person: a priming dose followed by a booster either three or four weeks later.

The report suggests that a second phase of vaccinations should involve critical risk workers — people in industries essential to the functioning of society — as well as teachers and school staff; people of all ages with an underlying health problem that increases the risk of severe Covid-19; all older adults not vaccinated in the first phase; people in homeless shelters and group homes, and prisons; and staff working in these facilities.

Young adults, children, and workers in essential industries not vaccinated previously would make up the third priority group. Remaining Americans who were not vaccinated in the first three groups would be offered vaccine during a fourth and final phase.

The report is meant to serve as a guide for more detailed prioritization plans on the order in which Americans will be offered vaccine. That more granular work is already being conducted by the Advisory Committee on Immunization Practices, an expert panel that crafts vaccination guidance for the CDC, and by state, local, and tribal health authorities, who must identify the actual people in their regions who fall into the priority groups.

There has been discussion of prioritizing people of color, who have been disproportionately badly hit in this pandemic. But the report does not recommend that Black, Hispanic, Latinx people, or American Indians or Alaskan natives be treated as a distinct priority group.

The committee suggested that there does not appear to be a biological reason for why these communities are more seriously affected by the pandemic. Instead, it argues, the high rates of infections and deaths in these communities are due to systemic racism that leads to higher levels of poor health and socioeconomic factors such as working in jobs that cannot be done from home or living in crowded settings.

The report therefore prioritized other factors — people with underlying medical problems, people living in crowded environments, for instance — rather than creating priority categories for racial or ethnic groups.

The ACIP’s recommendations will go to the CDC. It remains unclear, however, whether the CDC, Operation Warp Speed — the task force set up to fast-track development of Covid-19 vaccines, drugs and diagnostics — or the White House will make the final determinations on who will be vaccinated first.

The task of determining who should be at the front of the vaccines line is not an easy one, and must be made without key pieces of information. It’s not yet known how many vaccines will prove to be successful, when they will be approved for use and in what quantities. Critically, some vaccines may prove to be more effective in key groups — the elderly, for instance — than others. Knowing that in advance could influence the recommendations, but people working on the priority groups cannot wait for that information to become available.

Initial discussions suggest large numbers of Americans would qualify as members of priority groups, a reality that will likely require additional tough decisions to be made.

CDC estimates that there are between 17 million and 20 million health care workers in the country, and roughly 100 million people with medical conditions that put them at increased risk of severe illness if they contract Covid-19. There are roughly 53 million Americans aged 65 and older and 100 million people in jobs designated as essential services. There is some overlap among these groups — health workers, for instance, are also essential workers.

A report released last month by the Johns Hopkins Center for Health Security recommended dividing priority groups into two tiers, with health workers and others essential to the Covid-19 response in the first tier and other health workers in the second.

In that report, people at greatest risk and their caregivers, and workers most essential to maintaining core societal functions would also be designated to be in the first tier.