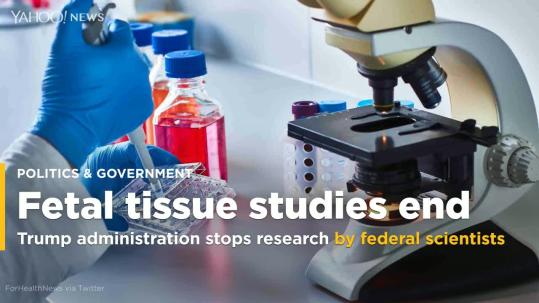 Why it matters: The decision is considered a win for anti-abortion rights supporters and a major blow to scientists who rely on the tissue from elective abortions for research into diseases like cancer, HIV and Zika, the Washington Post reports.

The administration also revoked a multimillion-dollar contract for a University of California at San Francisco lab that uses the tissue to test HIV treatments, per the Post.

Context: The debate over the federal use of fetal tissue — obtained from abortions — got off the ground in 2015, when an anti-abortion rights group released videos alleging Planned Parenthood profited from selling the material. Planned Parenthood claimed the footage had been doctored to mislead, and after several state and congressional inquiries, the health care provider was cleared of misconduct.

The National Institutes of Health funds about 200 external research products that use fetal tissue, which will be unaffected. There are only 3 NIH-run projects that will be impacted.

What they’re saying: While the move is supported by anti-abortion advocates, scientists say it’s an impediment to finding new medical treatments.

While scientists say that there is no equally effective alternative to fetal tissue in research, opponents of its use say that some newer methods show potential, the Post reports.