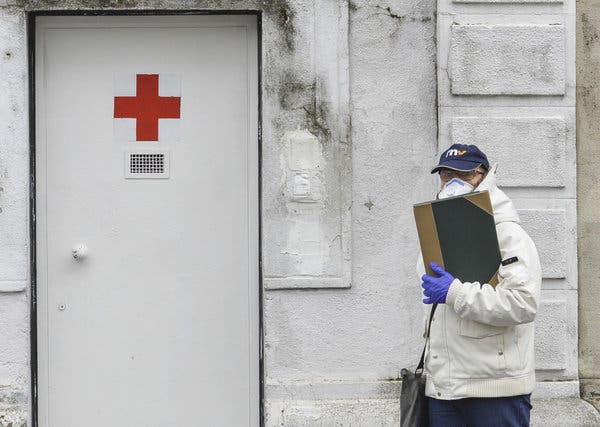 MILAN — None of us have ever experienced a tragedy like it.

We know how to respond to road accidents, train derailments, even earthquakes. But a virus that has killed so many, which gets worse with each passing day and for which a cure — or even containment — seems distant? No.

We always think of calamity as something that will happen far from us, to others far away, in another part of the world. It’s a kind of superstition. But not this time. This time it happened here, to us — to our loved ones, our neighbors, our colleagues.

I’m an anesthesiologist at the Policlinico San Donato here in Milan, which is part of the Lombardy region, the heart of the Italian coronavirus outbreak. On Feb. 21, the day on which the first case was recorded, our hospital, which specializes in cardiac surgery, offered to help with the care of patients with Covid-19. Along with other hospitals, we created a task force of intensive care doctors to be sent to hospitals in the “red zone.”

All planned surgeries were postponed. Intensive care beds were given over to the treatment of coronavirus patients. Within 24 hours, the hospital created new intensive care places by converting operating theaters and anesthetic rooms. And 40 more beds were dedicated to patients suspected or proven to have the virus, though not in a serious condition.

The patients who arrive remain for many days, straining medical resources. Already across northern Italy — in Lombardy, Veneto, Emilia-Romagna and Marche — health care systems are under enormous stress. Medical workers are exhausted. As the virus spreads, other regions will soon find themselves in the same situation.

Fortunately, Lombardy and the national government adopted aggressive containment measures 10 days ago. By the end of this week — after 15 days, the incubation period of the infection — we will see whether such measures have been effective. Only then might we see a slowing down in the spread of the virus.

It cannot come too soon. There has been speculation that doctors may be forced to decide whom to treat, leaving some without immediate care. That’s not my experience: All patients at my hospital have received the treatment they require. But that may not last. If the number of patients infected does not start to drop, our resources won’t stretch to cover them. At that point, triaging patients — to give priority to those with more chances of survival — may become standard practice.

My colleagues, at the Policlinico and throughout the country, are showing a great spirit of sacrifice. We know how much we are needed right now; that gives us strength to withstand fatigue and stress. How long such resistance will last, I cannot say. Some colleagues have tested positive for the coronavirus, and a few have needed intensive care. For us all, the dangers are great.

As an anesthesiologist devoted to surgical emergencies, I haven’t had many direct dealings with coronavirus patients. But there was one. An elderly man in a fragile condition, he was set to have tumor removed. The surgery proceeded as normal: I put him to sleep, and he awoke four hours later, without pain.

That was in mid-February. A week later, the telltale symptoms began to show: a high fever, a cough. Before long, pneumonia. Now he’s in intensive care, intubated and in a critical condition. He is one of many who have become a number without a name, one of those that represent the worsening of the situation.

I hope the beginning of the end of this outbreak will be soon. But we will know that it’s coming only if and when the infections begin to decline.

The population’s calm response to the restrictive rules imposed by the government, the experience gained in the management of critically ill patients and the rumors of new treatments for the infection are grounds for hope. Perhaps the containment measures will work, and the news at the end of the week will be good.

But for now, we are in the thick of tragedy.