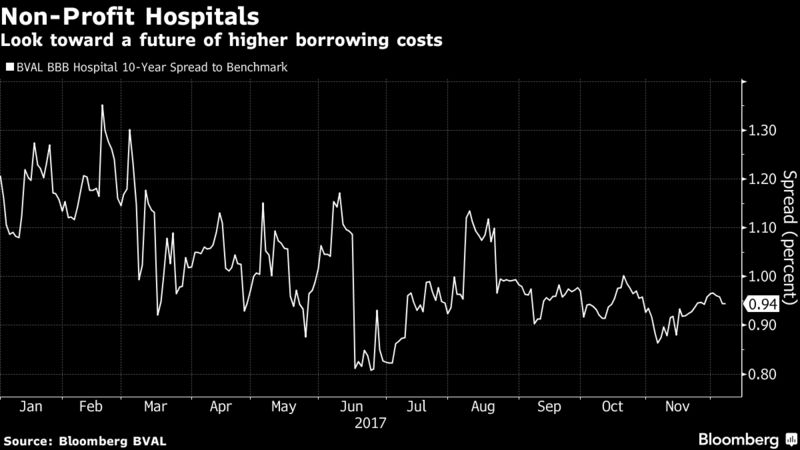 As Congress moves to assemble the final version of its tax plan, projects like Spooner, Wisconsin’s 20-bed hospital hang in the balance.

The rural community, about 110 miles (177 kilometers) northeast of Minneapolis, sold tax-exempt bonds to build the $26 million facility it opened last May. The hospital’s chief executive officer said that if its access to such low cost financing had been cut off it would have paid over $6 million more in interest.

That may soon be an expense that other hospitals across the country will have to shoulder. The House’s tax legislation revokes non-profit hospitals’ ability to raise money in the municipal market, where investors are willing to accept lower interest rates because the income is exempt from federal taxes. That’s threatening to saddle health-care providers with higher borrowing costs at a time when their finances are already under pressure.

“Should tax-exempt financing not be available in the future, it may really harm our ability to build affordable senior housing and assisting living facilities,” said Michael Schafer, Spooner Health’s CEO.

For small, rural hospitals across the country, labor, drug, and technology costs are increasing faster than the revenue and patients’ unpaid debts are on the rise. Higher financing costs would be one more challenge.

David Hammer, head of municipal bond portfolio management for Pacific Investment Management Co., said the loss of the tax-exemption could raise borrowing costs by 1 to 2 percentage points at small facilities with a BBB rating or below. That “could have a meaningful impact on their balance sheets,” he said.

At least 26 non-profit hospitals are already either in default or distress, meaning they’ve notified bondholders of financial troubles that make bankruptcy more likely, according to data compiled by Bloomberg. That includes falling short of financial terms set by their debt agreements and having too little cash on hand.

Many of them are based in rural communities where the populations tend to be “older, poorer and sicker,” according to Margaret Elehwany, the vice president of government affairs and policy at the National Rural Health Association. She estimates that about 44 percent of rural hospitals operate at a loss. There have been at least seven municipal bankruptcy filings by hospitals since last year, the most of any municipal sector excluding Puerto Rico.

The risk that Congress will prevent hospitals from accessing the municipal market worries Dennis Reilly, the executive director of the Wisconsin Health & Educational Facilities Authority, an agency that issues debt for non-profits such as Spooner Health.

“All of us in the industry were completely blindsided by the House proposal,” Reilly said in an interview from Washington, where he was meeting with members of Congress about the proposed bill.

“Without tax-exempt financing, not-for-profits across the country will have increased borrowing costs of 25 to 35 percent because they’ll have to access the taxable market,” he said. “For many of the rural providers like Spooner, much of their project they would not have been able to do with the higher cost of capital.”

A Rush to Beat the Clock

Hospitals are among those rushing to issue tax-exempt debt while they still can. Mercy Health, a Catholic health-care system that operates in Ohio and Kentucky, is scheduled to sell $585 million tax-exempt bonds next week. The deal, originally planned for early next year, was moved up after the release of the House proposal.

Spending more on debt would cut into the funds available for facilities, equipment and charitable outreach, like programs for opioid addiction, according to Jerome Judd, Mercy’s senior vice president and treasurer. “Things like that are impacted,” he said.

At least some members of Congress share the hospital executives’ concerns. Last month, some Republican lawmakers sent a letter to leadership pushing for the final plan to preserve the ability of hospitals and other entities, like affordable housing agencies and universities, to issue tax-exempt bonds.

“Private activity bonds finance exactly the sort of private public partnerships of which we need more of, not less,” they wrote. “These changes are incompatible with President Trump’s priority for infrastructure investment in the United States.”

It’s Tough to be Small

Some hospitals already opt to sell their bonds in the taxable municipal market to avoid disclosures and restrictions over how the proceeds are used, though they are typically larger entities that can secure advantageous rates because of the size of their deals. Patrick Luby, a municipal analyst at CreditSights, said smaller clinics with only a few million of bonds to sell would have a hard time accessing that market, which attracts corporate debt investors accustomed to big issues.

“Even what we would consider a large deal in the muni market is almost an odd lot in corporate bonds,” he said. “Very large hospital chains, large household name universities — global investors will buy those names, but they’re not going to buy a $15, $25, $50 million local hospital.”

If the House plan is enacted, hospitals “will have a really difficult time accessing the market,” he said.