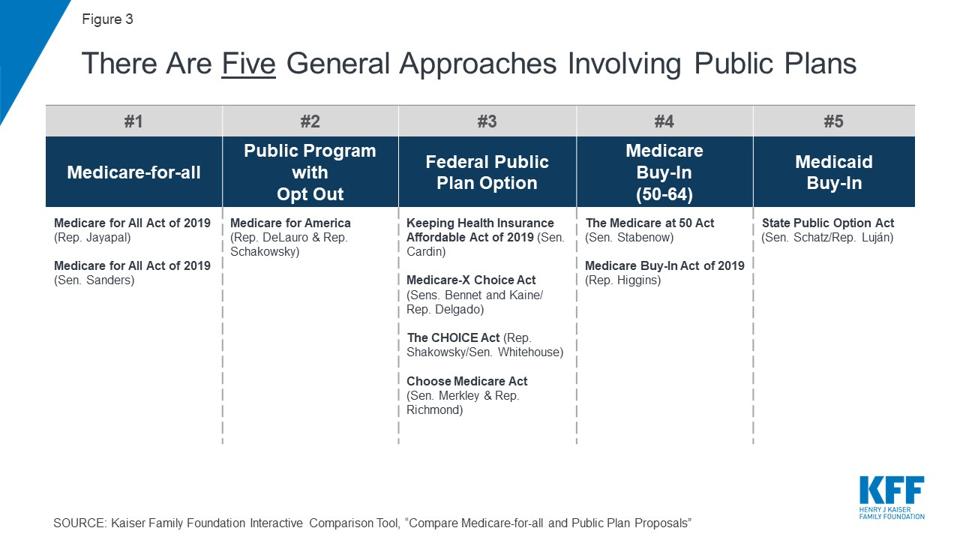 Even with two dozen Democrats running for President and most touting an expansion of Medicare benefits to everybody, the public is still unclear how a national single payer health plan like “Medicare for All” will benefit them.

Within those approaches are 10 national plans introduced in Congress that include everything from a single payer version of Medicare for All that would uproot private coverage to a “public program with an opt out” that would be offered along side commercial coverage. Other plans would allow Americans to buy into Medicare as young as 50 years old or buy into Medicaid coverage for the poor.

But no matter the effort to expand health insurance coverage, much is to be done to educate the public at large even as single payer supporters like Sens. Bernie Sanders, Elizabeth Warren and Kamala Harris push Medicare for All on the campaign trail.

“Our polling shows some Americans are unaware of how the implementation of a national health plan could impact them,” said Mollyann Brodie, Kaiser’s senior vice president and executive director, public opinion and survey research. “For example, many people (55%) falsely assume that would be able to keep their current health insurance under a single-payer plan.”

Democrats on the campaign trail hoping to challenge President Donald Trump should Republicans nominate him to run for re-election in 2020 see rising support for a national health plan that would make the government the only insurance carrier.

“Our polls have shown a modest increase in support for the idea of a national health plan,” Kaiser’s Medicare for All presentation showed. Some of these health insurance expansions would be single payer versions of “Medicare for All’ like that proposed by Sanders in the U.S. Senate and Rep. Pramila Jayapal (D-Washington) in the U.S. House of Representatives that would uproot private coverage and replace it with government run Medicare.

Other public approaches would involve a “public program with an opt out” known as Medicare for America or a “Medicare Buy in” like that proposed by Sen. Debbie Stabenow (D-Michigan). Other public plans would involve a so-called “federal public plan option” that would be offered along side commercial coverage on a government exchange and there are also Medicaid buy-in proposals being floated in a number of states.

Politically, the lack of knowledge of Medicare for All and public option proposals offers opportunities for both Democrats who favor Medicare for All and Republicans who want to derail a government expansion of health benefits, particular an approach that would essentially replace much of the private system.

“As the public learns more about the implications of each of these proposals, support may increase or decrease,” Kaiser’s Brodie said.