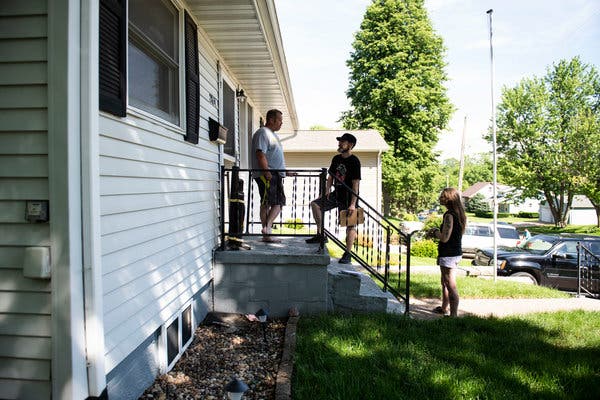 Art Miller listened patiently as the stranger on his doorstep tried to sell him on the Medicare for All Act of 2019, the single-payer health care bill that has sharply divided Democrats in Congress and on the presidential campaign trail.

The visitor, Steven Meier, was a volunteer canvasser who wanted Mr. Miller to call his congresswoman, Abby Finkenauer, the young Democrat who took a Republican’s seat last year in this closely divided district — and press her to embrace Medicare for all. Beyond congressional politics, there was the familiar role that Iowa plays as the first state to weigh in on the fight for the Democratic presidential nomination.

“I want to know how my grandkids are going to pay for it, O.K.?” Mr. Miller, 71, mused, peering at the flier that Mr. Meier had handed him.

It was a fairly typical encounter for Mr. Meier, 39, who with hundreds of volunteers around the country is working with National Nurses United, the country’s largest nurses’ union, to build grass-roots support for the single-payer bill, a long shot on Capitol Hill and a disruptive force in the party. House Democrats have declared this Saturday and Sunday to be “a weekend of action on health care” — but they are split over whether to embrace extreme change or something closer to the status quo.

A single-payer health care system would more or less scrap private health insurance, including employer-sponsored coverage, for a system like Canada’s in which the government pays for everyone’s health care with tax dollars. Democrats not ready for that big a step are falling back on a “public option,” an alternative in which anyone could buy into Medicare or another public program, or stick with private insurance — a position once a considered firmly on the party’s left wing.

Lawmakers like Ms. Finkenauer, mindful of the delicate political balance in their districts, fear the “socialism” epithet that President Trump and his party are attaching to Medicare for all. On Friday, Mr. Trump called the House bill “socialist health care” that would “crush American workers with higher taxes, long wait times and far worse care.” But even Ms. Finkenauer, who beat the incumbent Republican in November by 16,900 votes, has been pulled left by the debate, embracing the public option, which could not get through Congress when the Affordable Care Act passed in 2010.

“In a divided Congress, I’m focused on what we can do to bring immediate relief to Iowans,” she said in an email.

The nurses’ union and a number of other progressive groups want nothing less than a government system that pays for everyone’s health care, seizing on the issue’s prominence and a round of Medicare for all hearings in the House with canvassing in the districts of many of the 123 House Democrats who have not thrown their support behind a single-payer system.

“Hearings are a moment for us to have a national stage for this campaign,” Jasmine Ruddy, the lead organizer for the nurse union’s Medicare for all campaign, told several dozen new volunteers on a training call last month. “It’s up to us to take advantage of the momentum we already see happening and turn it into political power.”

But building support for a single-payer health care system has been slow going. On Wednesday, the chairman of the Ways and Means Committee, Representative Richard E. Neal of Massachusetts, convening the House’s third Medicare for all hearing, said it was about “exploring ideas.”

Republicans warned darkly of sky-high tax increases, doctor shortages and long waits for care. Representative Kevin Brady of Texas, the senior Republican on the committee, said his constituents were “frightened” about their private coverage being “ripped out from under them.”

The nurses’ union campaign began just after Democrats won the House in November, when the union and several other groups held a strategy call with Representative Pramila Jayapal, Democrat of Washington, the chief author of the Medicare for All Act, and Senator Bernie Sanders of Vermont, who pushed Medicare for all into the mainstream during his 2016 presidential campaign.

“Rather than try to convince people it’s the right system,” Ms. Ruddy said, “our strategy is to reach the people who are already convinced that health care is a human right, to bring them in and actually make them feel the action they are taking matters.”

In Dubuque, Mr. Meier and his partner, Briana Moss, have knocked on 250 doors and gathered about 50 signatures over the past few months. About 20 volunteers, including a retired nurse and several college students, are also involved. Nationwide, canvassers have knocked on 20,000 doors and collected 14,000 signatures since February.

On a Saturday afternoon, Mr. Miller, a Vietnam veteran, told Mr. Meier about his positive experience with government health care through the Department of Veterans Affairs, saying, “I’ve seen how it can work.”

A few houses down, a woman who owns a cleaning service and would give only her first name, Sharon, and her party affiliation, Republican, said that if the bill covered abortions, “I won’t go for that.”

She added that she would be happy to stop paying $170 a month for supplemental insurance to cover what Medicare does not, but she did not want to see people who do not work receive free care. From the garage, her husband hollered that he agreed. Conceding defeat, Mr. Meier and Ms. Moss moved along.

Both Sanders supporters, they took on the cause in part because Ms. Moss has Type 1 diabetes and has struggled on and off to stay insured, though now she has Medicaid under the Affordable Care Act’s expansion of the program. Ms. Moss, 30, went to see Ms. Finkenauer in her district office this year and asked if she supported a government system that eliminated insurance. Ms. Finkenauer, she said, stated her preference for a public option.

“That’s simply a compromise that leaves the insurance companies still in the game,” said Mr. Meier, who recently started working at John Deere building backhoes and will soon have employer-based coverage after being uninsured for his entire adult life.

The Jayapal and Sanders bills would both expand traditional Medicare to cover all Americans, and change the structure of the program to cover more services and eliminate most deductibles and co-payments. There would effectively be no private health insurance, because the new system would cover almost everything; Mr. Sanders has said private coverage could be sold for extras like cosmetic surgery.

While polling does show that Medicare for all has broad public support, that drops once people learn it would involve raising taxes or eliminating private insurance. That finding bewilders Mr. Meier, given many of the conversations he has on people’s front steps.

Those conversations keep coming. Rick Plowman 66, complained bitterly about how despite having Medicare, he had to pay nearly $500 for inhalers to treat his chronic obstructive pulmonary disease. Still, he was skeptical.

“I just don’t know what it’s going to look like down the road,” Mr. Plowman said. “Even Social Security for kids, you know? Even for you guys?”

At a white bungalow around the corner, Mr. Meier found — finally — that he was preaching to the choir with Bobby Daniels, 50, and his wife, Andrea, 46. Mr. Daniels, a forklift operator from Waterloo, said their coverage came with a $3,000 deductible and he would “most definitely” support Medicare for all. Ray Edwards, 36, an uninsured barber, also heartily signed on.

At the final stop of the day, Mr. Meier and Ms. Moss encountered Jeremy Shade, 36, a registered Republican who promptly told them his sister lived in Canada and had spent “hours and hours in the hospital, waiting for care” under that country’s single-payer system.

“I get that concern, and it’s something I’m worried about, too,” Mr. Meier said as Mr. Shade’s dog barked. “Would you be interested in maybe just calling Abby Finkenauer and saying, ‘Hey, what are we doing about the health care problem in this country?’”

“My wife would,” Mr. Shade said, explaining that she was a Democrat. “I’m real wary about it.”

Two hours of hot canvassing amid swarms of gnats had yielded six petition signatures and a few pledges to call Ms. Finkenauer. Mr. Meier was determined to end on a positive note. “I really think health care could be the issue that could get people to stop being so on one side or the other,” he said, a point that Mr. Shade accepted, shaking his hand before retreating inside.