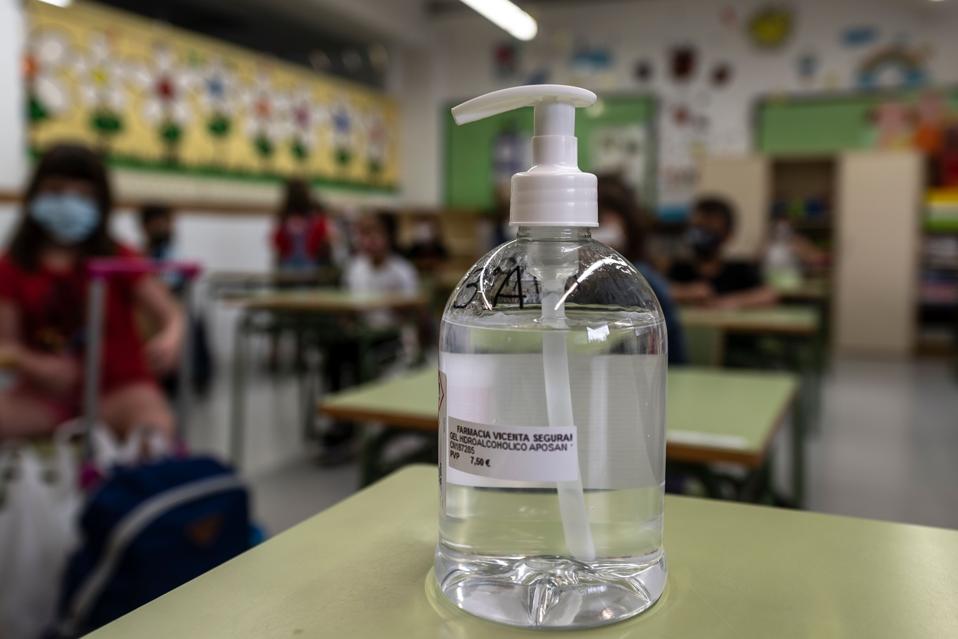 Since the start of the coronavirus pandemic, hand sanitizers have become a sought-after staple of life in a Covid-19-afflicted world. But supply chains have been turned upside down in our new normal, and some sketchy suppliers have at times stepped in to fill the vacuum. The result for consumers could be hand sanitizer that doesn’t work as advertised and might even be filled with impurities that can cause cancer.

When the pandemic set in during the spring, New Mexico’s Rolling Still Distillery began switching gears from making its trademark green chile vodka and other spirits to producing hand sanitizer for sale and free distribution during the early days of lockdown.

In the middle of May, Rolling Still founder Dan Irion (disclosure: Irion and I have lived in the same small town for years and occasionally hang out socially) began to receive a number of emails from bulk ethanol producers, offering up the alcohol for sanitizer production at prices as low as $1.60 a gallon, quite a deal over the $9 per gallon or more Rolling Still normally pays for its key ingredient.

To take advantage of the steep discount, Rolling Still would need to come up with $60,000 and take possession of a huge tank of the stuff.

Irion balked at the offer after he couldn’t get a straight answer about the quality of the ethanol. He asked one of the suppliers if organic alcohol was available and was told simply: “It’s all good. Don’t worry about it.”

He called Brian Coutu from Rolling Still’s regular alcohol supplier, Greenfield Global, who warned him away from what he says is fuel-grade ethanol potentially loaded with chemicals that are known to cause cancer.

Coutu knew this because Greenfield was getting the same cold calls Irion received, but as a large corporation, it could easily test samples.

“They send us a sample and it’s just God awful…it’s got acetaldehyde and benzene and all kind of nasty stuff in it; it’s not pure,” Coutu told me over the phone. “What (fuel producers) are trying to do is dump it off to these companies that run it through charcoal and try to do a million other things to make it USP grade (safe for food, drug or medicinal use), which it’s still not.”

Irion and Coutu both told me that the cold calls had largely stopped by the end of June. The price of ethanol cratered at the end of March as the pandemic took hold and fuel demand dropped. It stayed low through May before edging back near pre-pandemic levels at the end of June.

“Because of the fast and furious nature of the hand sanitizer industry at that time, we might have done it,” Irion says. “I’m sure there are others who saw this as a way to do something good and make money.”

And this is the big question for right now. How much of the sanitizer that made it to warehouses, store shelves and ultimately into our homes, cars and hands was produced from industrial fuel-grade ingredients rather than safe medical or food grade alcohol?

“You’re seeing less pure forms get into the market because there is a shortage of ethanol,” says Mike Sandoval, President and Chief Operating Officer of Santé Laboratories. “We see tert-butyl impurities, we see methanol, we see benzene in many of the hand sanitizers we test… We’ve seen some tequila grade ethanol that when you open the bottle it smells terrible, unless you like tequila… we’re seeing a lack of transparency in this space.”

Santé Labs works primarily in the hemp and CBD markets, providing quality testing and other services. CBD manufacturers can work with large amounts of ethanol and also turned to making hand sanitizers in the spring.

Sandoval says he began seeing CBD manufacturers and related companies using “untraditional sources” of ethanol from places like Mexico, Guatemala, South America and the fuel industry. The raw alcohol often came with a certificate of authenticity claiming 100 percent purity, but in reality it might actually contain chemical impurities and a significant amount of water.

“They come from a price sensitive market where no one wants to pay for high quality tests… They’re not used to operating in sophisticated manufacturing where you are required to test incoming raw material. For example the ethanol or isopropyl alcohol that goes in a hand sanitizer. You’re supposed to test (according to Food and Drug Administration rules) the purity of that ingredient before you formulate it, and that’s just not happening.”

For its part, the FDA has recently made public guidance on a testing method to detect impurities in hand sanitizers like those seen by Greenfield and Sante Labs.

“The agency’s investigation of contaminated hand sanitizers is ongoing,” the FDA said in an email. “Producing, importing and distributing toxic hand sanitizers poses a serious threat to the public and will not be tolerated.”

The takeaway from all this is that the ethanol market for manufacturers new to the production of hand sanitizer was flooded with sketchy raw alcohol that could be diluted or tainted with carcinogens. If that raw material isn’t tested on the front end, the resulting final product can come out with those impurities and an alcohol concentration that doesn’t meet the claims stated on the label.

The FDA maintains a list of hand sanitizers to avoid because they’ve been found to contain dangerous amounts of methanol, or an insufficient amount of its actual sanitizing ingredient, such as ethanol or isopropyl alcohol. However, the FDA’s enforcement powers are limited. A new waiver program created in response to the pandemic makes it easier for manufacturers to get around substantiating their label claims.

“Nine out of ten people are not meeting the label claim,” Sandoval says. “So most of the hand sanitizer you’re using from stores – and I even saw one from Wal-Mart that was a big brand… their hand sanitizers were crystallizing and turning green. I guarantee that they’re at 50 percent ethanol when they need to be at 70 percent.”

This brings up yet another concern, which is the shortage of proper plastic bottles and containers for sanitizer. Sandoval suspects that some manufacturers may have resorted to using the wrong type of containers, which then react with the alcohol, leaching chemicals into the sanitizer and turning its color.

“This entire supply chain is upside down because there’s a shortage of everything.”

Covering the stink of subpar sanitizer

Coutu at Greenfield Global says he’s aware of companies that have purchased their alcohol from unconventional sources, lured by prices as much as 90 percent lower than what Greenfield would charge.

The FDA relaxed the allowable limit of impurities like acetaldehyde and benzene that can make it into hand sanitizer, but Coutu says the limits still only allow a very small amount, whereas the samples Greenfield was testing had levels of contamination ten to 100 times higher than the new limits.

“And the odor on it is just not acceptable. It smells like burnt tequila… there’s some pretty nasty stuff out there and it’s dangerous.”

New services have even popped up this year, with fragrance manufacturers offering up products to help reduce the bad odor of some ethanol-based hand sanitizers.

Irion feels like he dodged a bullet by not jumping at the deeply discounted supply of ethanol others may not have been able to resist.

Rolling Still continued buying the organic alcohol it uses in both its spirits and sanitizer. It’s now ramping up production of sanitizer, which Irion says has no need for added fragrances to mask any ethanol odors, but some local osha and sage is infused to lighten the scent.

The alcohol used is also distilled five times just to make sure all impurities are removed.