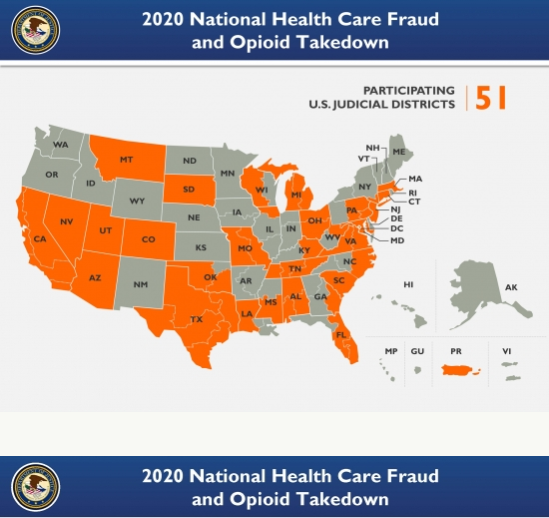 Telehealth fraud has increased significantly since 2016, the HHS Office of Inspector General said. As providers have quickly pivoted many services to virtual care during the COVID-19 pandemic, attempts at fraud will likely follow.

One of the cases outlined Wednesday included false claims for COVID-19 testing while another involved a COVID-19 related scheme to defraud insurers out of more than $4 million.

The telehealth fraud allegedly involved a marketing network that lured hundreds of thousands of people into a criminal scheme with phone calls, direct mail, TV ads and online pop-up ads. Telemedicine executives then paid doctors to order unneeded medical equipment, testing or drugs with either no patient interaction or only a brief call.

Those were either not given to the patients or were worthless to them. The proceeds were then laundered through international shell corporations and banks.

The scheme is similar to one DOJ prosecuted in April 2019 involving fraudulent telehealth companies that pushed unneeded braces on Medicare beneficiaries in exchange for kickbacks from durable medical equipment companies.

The massive bust included the work of 175 HHS OIG agents and analysts and targeted myriad fraud operations across the U.S. and its territories.

One of the larger scams involved 29 defendants in the Middle District of Florida. A telemedicine company and medical professionals working for it billed Medicare for medical equipment for patients they never spoke to.

In New Jersey, laboratory owners paid marketers to get DNA samples at places like senior health fairs. Doctors on telemedicine platforms then ordered medically unnecessary and not reimbursable genetic testing.