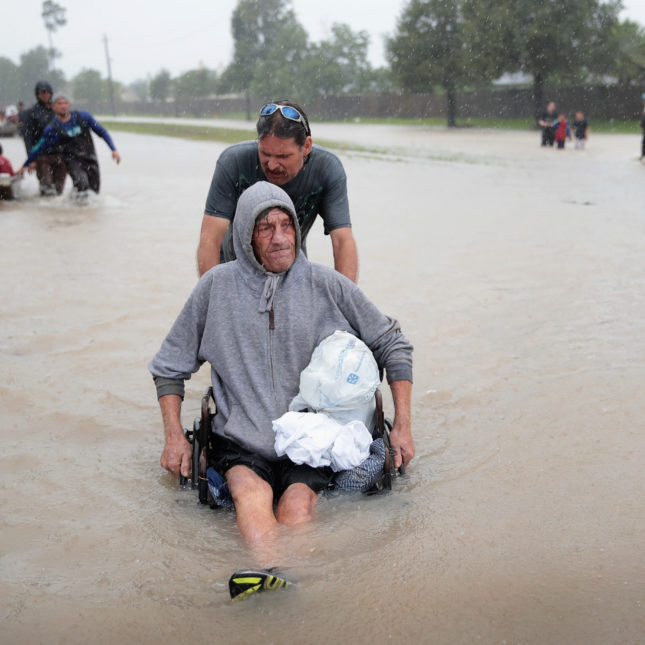 Amid the evacuation of approximately 1,500 patients from Houston-area hospitals, officials are commending the emergency response by health providers — while also cautioning that it may be weeks before the facilities are back to business as usual.

The SouthEast Texas Regional Advisory Council — which has overseen catastrophic medical operations since Hurricane Harvey as part of Houston’s emergency command center — estimates that nearly two dozen hospitals have evacuated patients by ambulance and airplane over the course of the past week.

“The storm was so huge it was uncertain what hospitals might be in harm’s way,” said Darrell Pile, chief executive officer of SETRAC. Had they known Harvey would grow into a Category 4 storm, Pile said, they would have staged evacuations three days in advance. But Harvey was unpredictable from the start — and grew stronger without much warning.

Evacuations have been slow not only because of the perils involved in moving patients but also because it has taken time to find other hospitals to accept them. “Some patients may have had gone to Dallas, San Antonio, Austin, or even Waco,” Pile said. “You’ve got to find the hospital to handle the unique needs of the patients you want to transfer.”

Evacuation numbers continued to climb on Tuesday. But Pile said numerous hospitals also scaled back or suspended plans for evacuations. One such facility was Ben Taub, one of Houston’s major safety-net hospitals, which only evacuated three patients after originally seeking to move all 350 patients after flooding occurred inside the hospital basement.

“In the case of Ben Taub, as the waters went down, and additional staff were able to arrive, they whittled down their list,” Pile said, speaking Wednesday. “They may even open back up to full service later today.”

Bryan McLeod, director of external and online communications at Harris Health System, said in a statement Tuesday afternoon that Ben Taub, the system’s largest hospital, is now seeking to “offload some of the patients that we currently have” in anticipation of a “surge of patients” expected as roads clear.

“I can only imagine the burden is going to increase,” said Vivian Ho, a health care economist with Rice University. “It’s going to get tough on them.”

Pile praised the coordination of hospitals, first responders, and civic leaders. In other major storms elsewhere, he said, some hospitals have failed to communicate effectively; ambulances would bring patients to their doors even though the facilities might be unable to meet their needs.

By contrast, Pile said, roughly 25 hospitals affected by Harvey declared an “internal disaster” — a status that reflects a hospital facing problems in carrying out normal daily operations — that allowed SETRAC to pass along timely information along to first responders who could, in turn, divert patients toward care at hospitals capable of treating them.

“The majority of our hospitals stayed open,” Pile said. “The teamwork of hospitals and EMS agencies through our coalition kept it from becoming an even a bigger disaster.”

Pile hasn’t heard of any hospitals in the Houston area devastated to the point of shuttering — something that’s also occurred in other storm-ravaged cities. It’s because of that he believes nearly all Houston-area hospitals will be fully up and running by the end of September.

“This storm was paralyzing,” Pile said. “Within a month, [I expect] 90 to 95 percent of hospitals will be back in full service. That’s a first.”

When an ambulance driver using her phone’s GPS got distracted and crashed through a guardrail, rolling off an embankment in north-central Ohio in August 2014, the consequences were dire: A 56-year-old patient was ejected and killed, and an EMS worker was injured.

The emergency medical service worker was not strapped in, and the patient was only partially restrained, a situation that is all too common in ambulances across the nation.

Unlike school buses, ambulances are not regulated by the federal government. While states set minimum standards for how they operate, it’s usually up to local EMS agencies or fire departments to purchase the vehicles and decide whether to require their crew to undergo more stringent education and training.

Some agencies demand that crew members in the back of an ambulance use lap and shoulder restraints for their patients and themselves, but many agencies don’t. In some places, ambulance drivers don’t receive any special training before they get behind the wheel, even though they must speed through traffic under tremendous pressure.

“One agency will make them take a course before they can drive. Another will just say, ‘here are the keys,’ ” said Bruce Cheeseman, Idaho’s EMS operations manager.

Ambulances have been involved in 4,500 crashes a year on average over a 20-year period, a third of which resulted in injuries, according to the National Highway Traffic Safety Administration (NHTSA). About 2,600 people a year were injured and 33 were killed. Some were drivers or ambulance crew members, some were patients and some were pedestrians, bicyclists or occupants of other vehicles.

Safety and EMS experts say ambulances should be safer than cars and more like school buses, given that they’re transporting sick or injured people and workers caring for them. While the number of injuries and fatalities may seem small compared to the number of people transported, the experts say state and local agencies need to do a better job overseeing ambulance safety.

“These are vehicles carrying cargo that’s human and vulnerable and fragile because they’re already injured or experiencing a medical emergency,” said Dia Gainor, executive director of the National Association of State EMS Officials, whose members license ambulance services and personnel. “It’s unconscionable that the public is placed at risk when being put in the back of an ambulance.”