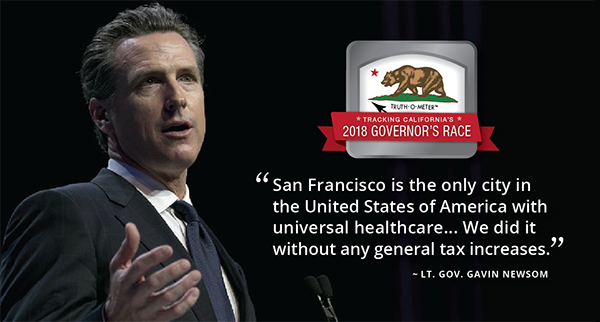 Perhaps no issue looms larger on both the state and national political stage than the question of universal health care coverage.

U.S. Presidential hopeful Kamala Harris (D) sent a shockwave through the national health care debate on Monday Jan. 28th by nonchalantly stating that she would eliminate private insurers as a necessary part of implementing “Medicare-for-all,” according to a CNN report.

Due to a firestorm of attention, most of it negative, the next day the Harris campaign walked back the previous day’s remarks in large part by stating that the candidate would also be open to more moderate health reform plans, which would preserve the private industry, according to the CNN report.

Newly elected California Governor Gavin Newsom (D) campaigned on the issue of single-payer health care and on his very first day in office unveiled a comprehensive package of reform proposals aimed at expanding state health care coverage subsidies and lowering its costs, which includes extending Medi-Cal to undocumented immigrants, according to a report by the LA Times.

In an interview, Gov. Newsom told the LA Times “These are not just symbolic gestures…We’re hoping to ignite a new conversation. It’s a moral imperative, not just economic,” states the LA Time report.

But as many experts, including Gov. Newsom, have pointed out, big systemic reform to the system, such as a move to a single-payer health system, would require the unlikely support of the Trump Administration.

Newsom has done a good job of tempering expectations for single-payer health care and his proposed coverage expansions and prescription cost controls demonstrate to the his supporters and the public that he is serious about expanding coverage as well containing costs.

“Where do you get the extra money? This is the whole question…I don’t even get it…how do you do that?,” said former California Governor Jerry Brown (D) following a universal healthcare discussion in Washington, D.C. in a 2017 interview with the LA Times.

At the time, Gov. Brown pointed out that the overall cost of medical care in California is equal to 18% of the state’s gross domestic product, which would be about $450 billion.

“You take a problem and say I’m going to solve it by something that’s an even bigger problem, which makes no sense,” then Governor Brown said at the time, according to the LA Times report.

Gov. Newsom developed some questionable rhetoric during the 2018 campaign, where he said that the State of California cannot afford not to move to a single-payer system because health care has become such a big expense in the state.

It appears that one of the major points of disagreement between former Gov. Brown and now Governor Gavin Newsom is the question of whether the State of California can afford to move to a universal health care system, specifically a single-payer system?

More recently, other high-profile liberal Democrats have come out against single-payer health care with former Mayor of New York City and billionaire Michael Bloomberg stating that Medicare-for-all “would bankrupt us for a very long time,” according to a CNN report.

“I think we could never afford that,” Bloomberg said, addressing pin factory employees in New Hampshire. “We are talking about trillions of dollars.”

“I think you could have Medicare-for-all people who are uncovered, but that’s a smaller group,” Bloomberg said.

“But to replace the entire private system where companies provide health care for their employees would bankrupt us for a very long time,” said Bloomberg according to the CNN report, which noted that Bloomberg made the comments in response to Sen. Kamala Harris calling for an end to the private health care market.

So what does all this mean for the current universal health care debate in California?

It means that California Democrats might want to heed the advice of two of the county’s most prominent liberal Democrats—former Gov. Jerry Brown and Michael Bloomberg—and proceed with great caution regarding the feasibility of California going it alone on universal health care.

As a long-time analyst of fiscal issues in California, I believe that former Gov. Jerry Brown and Michael Bloomberg are correct to point out the major challenges and risks of moving to a universal health care system—both at the state level and the federal level.