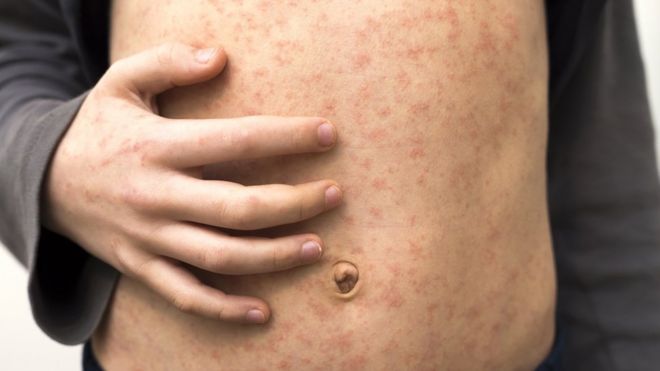 More than 140,000 people died from measles last year as the number of cases around the world surged once again, official estimates suggest.

Most of the lives cut short were children aged under five.

The situation has been described by health experts as staggering, an outrage, a tragedy and easily preventable with vaccines.

Huge progress has been made since the year 2000, but there is concern that incidence of measles is now edging up.

In 2018, the UK – along with Albania, the Czech Republic and Greece, lost their measles elimination status.

The US is reporting its highest number of cases for 25 years, while there are large outbreaks in the Democratic Republic of Congo, Madagascar and Ukraine.

The Pacific nation of Samoa has declared a state of emergency and unvaccinated families are hanging red flags outside their homes to help medical teams find them.

What are the numbers?

The global estimates are calculated by the World Health Organization (WHO) and the US Centers for Diseases Control and Prevention.

Measles cases do not go down every year – there was an increase between 2012 and 2013, for example.

However, there is greater concern now that progress is being undone as the number of children vaccinated stalls around the world.

“The fact that any child dies from a vaccine-preventable disease like measles is frankly an outrage and a collective failure to protect the world’s most vulnerable children,” said Dr Tedros Ghebreysus, director-general of the WHO.

How are the numbers calculated?

Every single case of measles cannot be counted. In 2018, only 353,236 cases were officially recorded (out of the 7.8 million estimated).

So scientists perform complex maths for each country.

They take reported cases, the population size, deaths rates, the proportion of children vaccinated and more to eventually produce a global estimate.

Dr Minal Patel, who performed the number-crunching, told the BBC: “We’ve had a general trajectory downwards for deaths, which is great. Everyone involved in vaccination programmes should be very proud.

“But we’ve been stagnating in numbers of deaths for about the past seven years, and what’s really concerning is from last year we’ve gone up, and it looks like we’ve gone backwards.”

What is going on?

In short, not enough children are being vaccinated.

In order to stop measles spreading, 95% of children need to get the two doses of the vaccine.

But the figures have been stubbornly stuck for years at around 86% for the first jab, and 69% for the second.

Why enough children are not being vaccinated is more complicated – and the reasons are not the same in every country.

The biggest problem is access to vaccines, particular in poor countries.

The five worst-affected countries in 2018 were Democratic Republic of Congo, Liberia, Madagascar, Somalia and Ukraine.

The Ebola outbreak in Liberia (2014-16) and plague in Madagascar (2017) have taken a toll on their healthcare systems.

“Democratic Republic of Congo, Somalia and Ukraine, the other countries hardest-hit by measles, each face conflicts, with DRC additionally battling a serious Ebola outbreak and rampant distrust,” Prof Heidi Larson, from the London School of Hygiene & Tropical Medicine, explained.

The other issue is people who do have access to vaccines choosing not to immunise their children.

Will things be worse next year?

What do the experts say?

Henrietta Fore, Unicef’s executive director, said: “The unacceptable number of children killed last year by a wholly preventable disease is proof that measles anywhere is a threat to children everywhere.”

Dr Seth Berkley, chief executive of Gavi, the Vaccine Alliance, said: “It is a tragedy that the world is seeing a rapid increase in cases and deaths from a disease that is easily preventable with a vaccine.

“While hesitancy and complacency are challenges to overcome, the largest measles outbreaks have hit countries with weak routine immunisation and health systems.”