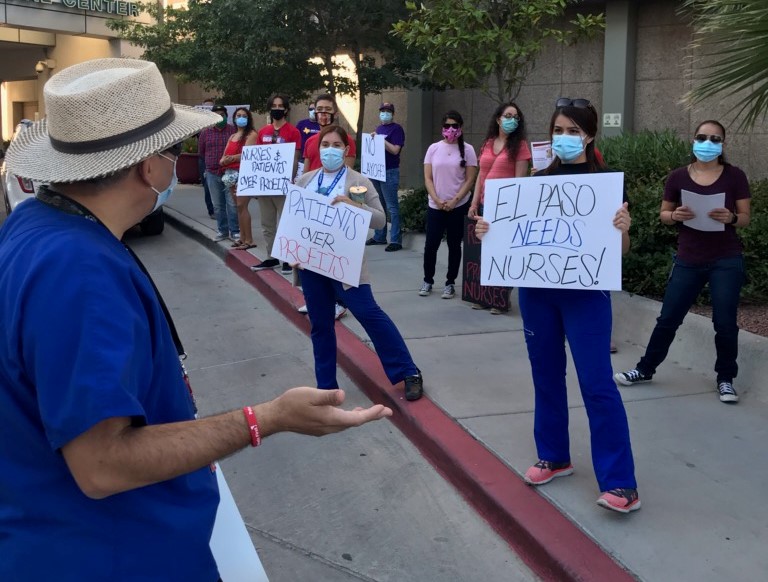 Nurses at 15 HCA hospitals represented by National Nurses United protested last week, saying the for-profit hospital chain threatened layoffs.  Nurses took to the sidewalks outside of their hospitals with signs, after they said they were told to expect cuts to benefits and staff if they didn’t give up negotiated wage increases.

In an emailed statement, HCA said it had no plans for layoffs.

A letter obtained by MedCity News threatened the possibility of reductions if the nurses did not accept HCA’s proposal.

“The facts are that non-represented colleagues across the HCA Healthcare enterprise are taking pay reductions and non-represented colleagues are giving up wage increases this year. HCA Healthcare has made these tough decisions in order to preserve jobs. To be equitable to all of our colleagues across the enterprise, we recently reached out to unions, with the hope that during this time of crisis, they would support the same measures for our unionized employees to minimize the impact on your compensation and employment status. …  If the (National Nurses Organizing Committee) and/or (Service Employees International Union) reject our proposal, colleagues represented by these unions will no longer be eligible for continued pandemic pay, may be subject to layoffs and may face other benefit changes.”

Nurses interviewed by MedCity News said they were asked to give up other benefits.

Zoe Schmidt, a registered nurse who works at Research Medical Center in Kansas City, said they were also asked to forego their 401(k) matching for the year and shift differential pay, or increased compensation for nurses that work night and weekend shifts.

“We’ve been fighting back against that. At my hospital, it does seem like they’ve backed down on wage freezes and 401(k) matching (changes),” she said.

Though Schmidt hasn’t seen any evidence of impending layoffs, she said she was worried about staffing changes that could push the number of patients past four or five per nurse for the medical surgical unit where she works.

“We’re not overstaffed by any means,” she said.

Juan Anchondo, who has worked as an RN for 16 years at Las Palmas Medical Center in El Paso, Texas, said nurses were told to expect 10% layoffs.

“The way they word it, it sounds like layoffs are imminent,” he said. “They wouldn’t be specific to which departments or which hospital.”

In the last two weeks, as the hospital started to reopen, he said his medical-surgical unit quickly expanded from 20 beds to 26 beds.

“We were barely keeping up with what we could with 20 beds available,” he said. “All of a sudden, when we had four nurses scheduled on the floor, all of a sudden four nurses, is that enough to cover 26 beds?”

Like other hospital systems, HCA has seen reduced volumes during the Covid-19 pandemic, with canceled elective procedures and patients nervous to come into the hospital.

The health system’s revenue was up during the first quarter to $12.86 billion, but its profits were down nearly 45% from the same period in 2019, for a total of $581 million.

For employees affected by low patient volumes, HCA said it had been offering them pandemic pay, giving them 70% of their base pay for hours not worked.

To offset its losses, the company cut salaries for 11,000 of its corporate staff, suspended stock buybacks and its dividend, and delayed certain capital projects.

In an emailed statement, HCA said the negotiations with unions had solely been about their wage increases and the health system’s pandemic pay program.

“At a time when hundreds of hospitals across the country are laying off and furloughing employees, HCA Healthcare has not laid off or furloughed a single caregiver due to the pandemic and we hope to avoid doing so in the future,” the company said in an emailed statement. “Throughout the pandemic, our goal has been to protect our colleagues’ jobs and to continue the pandemic pay program for all, including those represented by labor unions. But the unions’ rigid position on wage increases means we will likely have to make other adjustments that will affect the colleagues they represent.”