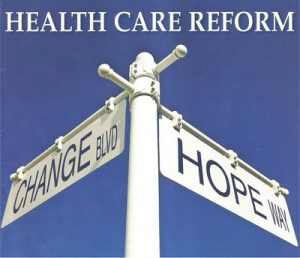 It was a bold claim when President Trump said that he was about to produce an overhaul of the nation’s health-care system, at last doing away with the Affordable Care Act, which he has long promised to abolish.

Now, with the two weeks expiring Sunday, there is no evidence that the administration has designed a replacement for the 2010 health-care law. Instead, there is a sense of familiarity.

Repeatedly and starting before he took office, Trump has vowed that he is on the cusp of delivering a full-fledged plan to reshape the health-care system along conservative lines and replace the central domestic achievement of Barack Obama’s presidency.

No total revamp has ever emerged.

Trump’s latest promise comes amid the outbreak of the novel coronavirus, which has infected millions, caused more than 150,000 deaths and cost Americans their work and the health benefits that often come with jobs. His vow comes three months before the presidential election and at a time when Trump’s Republican allies in Congress may least want to revisit an issue that was a political loser for the party in the 2018 midterm elections.

Yet Trump has returned to the theme in recent days.

Trump’s decision to revive a health-care promise that he has failed to deliver on — this time with less than 100 days before Election Day — carries political risks. Although it may appeal to voters who don’t like the ACA, it also highlights his party’s inability to come up with an alternative, despite spending almost a decade promising one.

It also raises questions about what exactly his plan would look like and whether it would cover fewer Americans than the current system as the pandemic ravages the country.

Nonetheless, some of Trump’s allies said floating health-care ideas is a smart move by the president.

Sen. Lindsey O. Graham (R-S.C.), who regularly meets and golfs with the president, said the health-care plan that Trump has referred to would come in the form of an executive order that Graham called “fairly comprehensive.” However broad, an executive order would fall short of a full legislative overhaul.

Graham said what Trump has in mind now would ensure that consumers do not risk losing their health plans if they get sick, but he did not give details.

“He’s pretty excited about it,” Graham said of the president. The ACA’s consumer protections for people with preexisting medical conditions is one its most popular facets with the public, and it is the one part of the law Trump consistently says he would preserve if he could get rid of the rest. How he could do that while containing costs after he and congressional Republicans remove the law’s requirement that everyone has to purchase health insurance remains the question.

Graham said it is politically astute for the White House to present an alternative to Democratic proposals close to the election, including the idea of Joe Biden, the party’s presumptive nominee, to build on the ACA so that more people could get coverage.

Still, senior Republican aides on Capitol Hill who are steeped in health care said they had little knowledge of any White House planning for a comprehensive replacement of the ACA.

The White House did not offer details or parse the president’s terminology, which has included saying that the forthcoming plan would be a bill. That implied legislation rather than an executive order.

“President Trump continues to act in delivering better and cheaper health care, protecting Americans with preexisting conditions, lowering prescription drug costs, and defending the right of Americans to keep their doctors and plans of their choice,” White House press secretary Kayleigh McEnany said in a statement to The Washington Post.

McEnany pointed out that Trump issued four executive orders in late July intended to lower prescription drug prices. “There will be more action to come in the coming weeks,” she said without identifying any.

On Capitol Hill, the president’s promises of health plans and legal efforts by the administration to scrap the ACA have created dilemmas for some Republicans. Of the GOP senators facing competitive races this fall, only Susan Collins (Maine) has said that she opposes the Justice Department’s decision to back an effort to gut the law in the courts. Other Republicans have struggled to answer directly, walking a tightrope between embracing a position that would go against popular provisions in the health-care law and risking the wrath of conservatives who want Obamacare repealed.

And the pandemic has also only sharpened the relevance of health care in the eyes of voters — increasing Republican anxiety about doing anything that could limit coverage ahead of the election. Republican Sens. John Cornyn (Tex.), Dan Sullivan (Alaska), Steve Daines (Mont.) and Martha McSally (Ariz.) — all on the ballot this November — this past week drafted legislation that would provide assistance through COBRA for people who lose their employer-sponsored health care as jobs continue to vanish during the pandemic.

“I think there’s definitely things we need to do,” Cornyn said. “But I think our focus ought to be on giving people more choices.”

For Trump, saying that he is about to produce a health-care plan to replace the ACA has become a recurrent mantra of his presidency.

During his 2016 campaign, condemning the law was central to Trump’s candidacy. During that campaign’s final days, Trump said he was so eager to repeal and replace the 2010 law that he might ask Congress to convene a special session to do it.

“It will be such an honor for me, for you and for everybody in this country,” the then-Republican nominee said, “because Obamacare has to be replaced. And we will do it, and we will do it very, very quickly.”

The ACA was a significant theme of the president’s joint address to Congress just over a month into his tenure. “Tonight I am calling on this Congress to repeal and replace Obamacare,” he said, calling for measures that would “expand choice, increase access, lower costs and, at the same time, provide better health care.”

With GOP majorities in both the House and the Senate, Congress devoted much of 2017 to trying to get rid of substantial parts of the law. But a succession of repeal bills ultimately faltered in the Senate. When the last one did, Trump said nothing.

Near the end of the year, Congress took one big whack at the health law. As part of a major change in tax law, it eliminated the penalty the ACA levied on most Americans if they failed to carry health insurance. The penalty’s end neutralized the law’s insurance mandate.

With little appetite after that among Senate Republicans to continue trying to gut the law, and a Democratic House majority a year later, the momentum for replacing the ACA fell back to the Trump administration. Cabinet departments have, by turns, undercut specific parts of the law and tried to have it invalidated in the courts, while emphasizing that their concern for the nation’s health-care system and America’s patients reaches beyond the ACA.

And the president? He has continued to periodically vow that he would come up with a better health plan.

In the fall of 2017, Trump took a major swipe at the law by ending payments to insurance companies that had helped them afford to offer lower-income customers discounts on their deductibles and other out-of-pocket costs, as the ACA requires.

During 2018, health officials sought to shrink the law in several other ways. They wrote rules that gave states greater latitude in defining a set of 10 “essential health benefits” that the ACA requires many health plans to cover. They widened the availability of short-term health plans — originally intended as bridge coverage when someone was, say, between jobs — that do not meet consumer protections or benefits that the law otherwise requires.

The administration has joined with a group of Republican attorneys general who are pursuing a lawsuit, now before the Supreme Court, that contends the entire ACA is unconstitutional. At first, the Justice Department argued that only part of the law is invalid, but the administration hardened its position to argue that the entire law should be thrown out.

As these and other administration health-care actions have played out, the drumbeat has continued that the president was about to reveal an ACA replacement plan.

In June 2019, Trump said in an interview with ABC News that he would announce a “phenomenal” new health-care plan “in about two months, maybe less.”

No speech or plan came.

In June, Health and Human Services Secretary Alex Azar suggested that the administration would develop a health-care plan only if the nation’s highest court, which has upheld the law in two earlier cases over the past eight years, overturns it this time. “We’ll work with Congress on a plan if the ACA is struck down,” Azar said on NBC’s “Meet the Press.” “We’ll see what the Supreme Court rules.”

That was three weeks before the president told Fox that he was about to issue a plan.

The administration’s antipathy toward the law has not produced much real-world change for the approximately 20 million people who have coverage through the insurance marketplaces the ACA created for those who cannot get affordable health benefits through a job and those insured through Medicaid expansions.

Early on, HHS slashed federal funding for advertising and other outreach efforts to encourage people to buy ACA health plans during the annual enrollment period. Critics of the administration predicted that sign-ups would ebb. They have not.

The most recent enrollment figures document the number of people choosing an ACA health plan who had followed up by paying insurance premiums last winter so their coverage was in place as of February. The figures, released last week, show that 10.7 million consumers have such plans, slightly more than the 10.6 million a year earlier.

Despite the administration’s steps to undercut parts of the law, and the elimination of the penalty for not having insurance, some of the ACA’s main features remain in place. They include federal subsidies for more than 8 in 10 people who buy health plans in the marketplaces created under the law, the expansion of Medicaid in most states, many consumer insurance protections, and a rule that young adults can stay on their parents’ insurance until they turn 26.

Against existing evidence, Trump says that will soon change.

“We’re getting rid of it because we’re going to replace it with something much better,” Trump told Wallace two weeks ago.