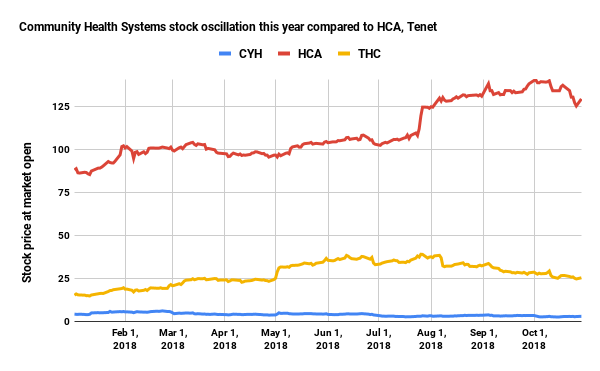 CHS, one of the largest publicly traded hospital companies in the U.S., reported its highest operating cash flow since the second quarter of 2015, according to Jefferies. The third quarter figure of $346 million is also significantly higher than the $114 million from the same quarter last year.

Similarly, volume and revenue didn’t tank as heavily on a same-store basis as they did overall. Same-facility admissions decreased just 2.3% (adjusted admissions by 0.8%) compared with a year ago. Net operating revenues actually increased by 3.2% during the quarter compared with last year, beating analyst expectations.

But declining admissions show how hospital operators continue to struggle under the fierce headwinds 2018 has blown their way so far. CHS is clearly not immune, as the 117-hospital system faces ongoing operational challenges, bringing in financial advisers earlier this year to restructure its copious long-term debt.

The 20-state hospital operator continues to deal with the fiscal fallout from its roughly $7.6 billion acquisition of Florida hospital chain HMA in 2014. The Department of Justice accused the 70-facility HMA of violating the Stark Law and the anti-kickback statute for financial gain between 2008 and 2012, activities CHS reportedly was aware of prior to the merger.

Just last month, CHS announced a $262 million settlement agreement ending the DOJ investigation into HMA’s misconduct. However, that liability was adjusted during the third quarter and, taking into account interest, now totals $266 million. The fee will reportedly be paid by the end of this year.

The settlement also slapped an additional $23 million tax bill on the 19,000-bed system under recent changes to the U.S. tax code.

But that’s not the only regulatory brouhaha CHS has dealt with this quarter.

Since August, CHS has been under civil investigation over EHR adoption and compliance. Annual financial filings show that the company received more than $865 million in EHR incentive payments between 2011 and 2017 through the Health Information Technology for Economic and Clinical Health Act, payments that investigators believe may have been overly inflated.

To deal with the burden, CHS has continued its portfolio-pruning strategy into the third quarter (although a recent Morgan Stanley report notes the system has a very high concentration of weak facilities, and those at risk of closing, relative to its peers).

During 2018 so far, CHS has sold nine hospitals and entered into definitive agreements to divest five more. The earnings report also divulged CHS is pursuing additional sale opportunities involving hospitals with a combined total of at least $2 billion in annual net operating revenues during 2017, taken in tandem with the hospitals already sold.

The ongoing transactions are currently in various stages of negotiation, the report notes, but CHS “continues to receive interest from potential acquirers.”

CHS is cast in a better light when balance sheet adjustment and non-cash expenses are discarded, as well. Adjusted EBITDA was $372 million compared with $331 million for the same period in 2017, representing a 12.4% increase and suggesting the company can still generate cash flow for its owners in a more friendly atmosphere than the one Q3 provided.

But, though Q2 results were a bright spot in an otherwise gloomy year for the massive hospital operator, its shares have lost about 30% of their value since the beginning of the year (compared to the S&P 500’s decline of roughly 0.5%).

Jefferies believes that CHS should improve its balance sheet and drive positive same-store volume growth, along with speeding up divestitures to raise cash to pay down debt, in order to improve its stock performance.