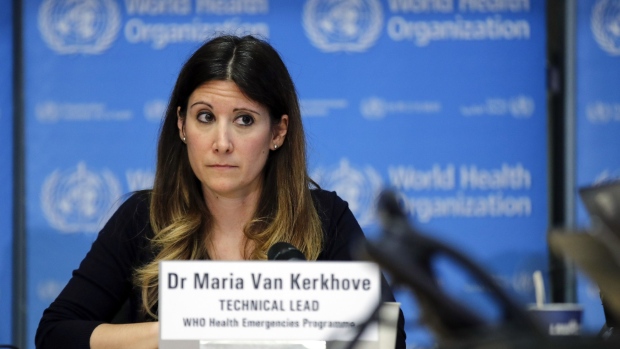 Seven million people have been infected worldwide, and new cases hit a high globally on Sunday, according to the W.H.O. Central banks are seeking new tools to offset the downturn.

New Jersey’s governor said on Tuesday that he was lifting the stay-at-home order that he issued in March. “With more and more of our businesses reopening, we’re no longer requiring you to stay at home,” he said.

The W.H.O. walked back an earlier assertion that asymptomatic transmission is ‘very rare.’

A top expert at the World Health Organization on Tuesday walked back her earlier assertion that transmission of the coronavirus by people who do not have symptoms is “very rare.”

Dr. Maria Van Kerkhove, who made the original comment at a W.H.O. briefing on Monday, said that it was based on just two or three studies and that it was a “misunderstanding” to say asymptomatic transmission is rare globally.

“I was just responding to a question, I wasn’t stating a policy of W.H.O. or anything like that,” she said.

Dr. Van Kerkhove said that the estimates of transmission from people without symptoms come primarily from models, which may not provide an accurate representation. “That’s a big open question, and that remains an open question,” she said.

Scientists had sharply criticized the W.H.O. for creating confusion on the issue, given the far-ranging public policy implications. Governments around the world have recommended face masks and social distancing measures because of the risk of asymptomatic transmission.

A range of scientists said Dr. Van Kerkhove’s comments did not reflect the current scientific research.

“All of the best evidence suggests that people without symptoms can and do readily spread SARS-CoV-2, the virus that causes Covid-19,” scientists at the Harvard Global Health Institute said in a statement on Tuesday.

“Communicating preliminary data about key aspects of the coronavirus without much context can have tremendous negative impact on how the public and policymakers respond to the pandemic.”

A widely cited paper published in April suggested that people are most infectious about two days before the onset of symptoms, and estimated that 44 percent of new infections are a result of transmission from people who were not yet showing symptoms.

The debate over transmission erupted a day after the W.H.O. said that cases had reached a new single-day global high — 136,000 on Sunday, with three-quarters in just 10 countries, mostly in the Americas and South Asia. The coronavirus has already sickened more than seven million people worldwide and killed at least 405,400, according to a New York Times database.

The Pan American Health Organization said on Tuesday that 3.3 million people in South and Central America have been infected with the coronavirus. Dr. Carissa F. Etienne, the agency’s director, said that many areas are experiencing exponential growth in infections and death.

In India, health experts are warning of a looming shortage of hospital beds and doctors to treat patients as the country grapples with a sharp surge of infections. India reported 10,000 new infections in the past 24 hours, for a total of at least 266,500, and has surpassed Spain to become one of the five countries with the highest caseloads.

Rajnish Sinha, the owner of an event management company in Delhi, struggled to find a hospital bed for his 75-year-old father-in-law, who tested positive for the virus on Tuesday.

“This is just the beginning of the coming disaster,” Mr. Sinha said. “Only God can save us.”