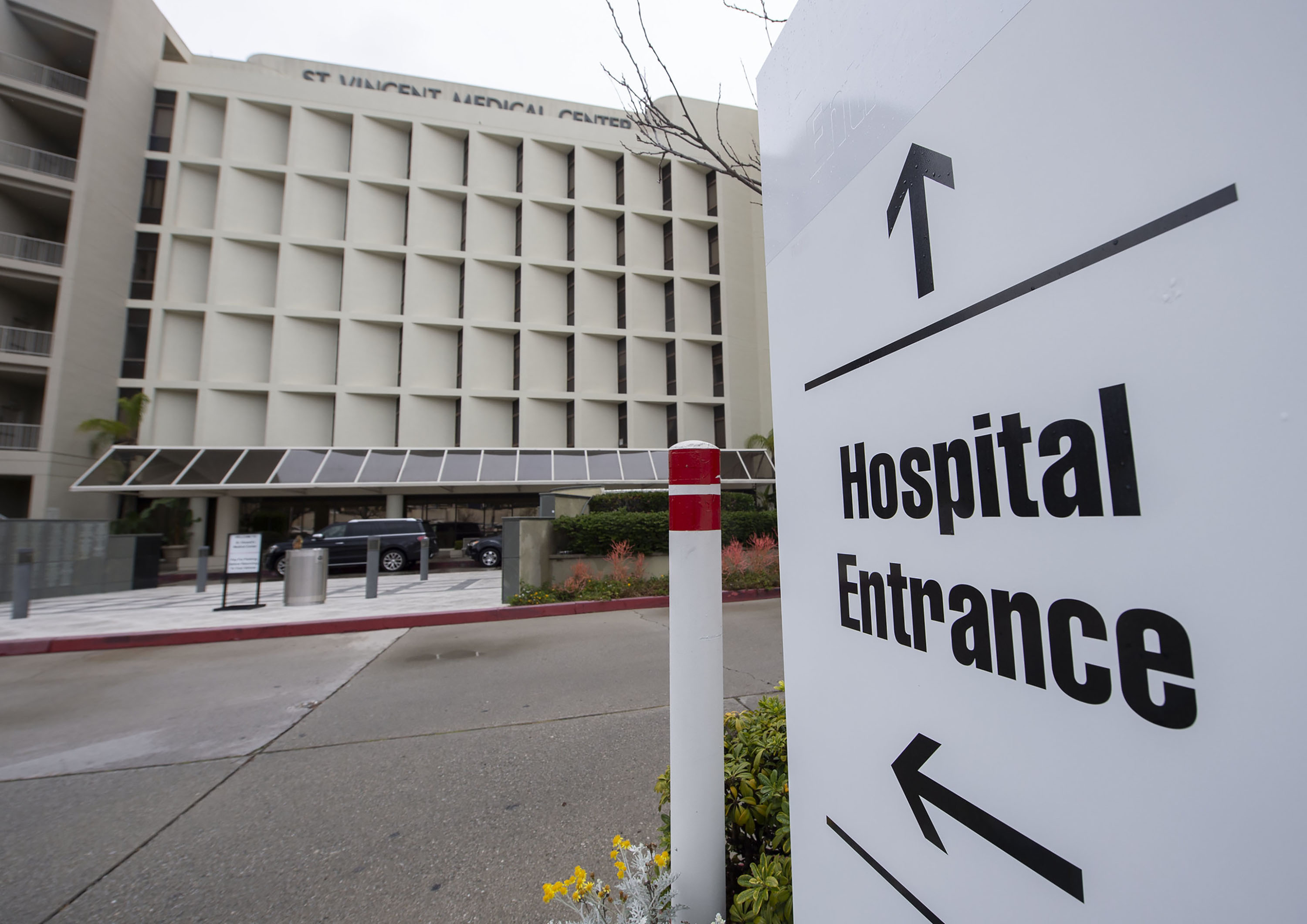 With recent flare-up in neighboring counties, L.A.-area hospital leaders want the county to work with the state to keep surge hospitals open.

Healthcare officials on Tuesday called for Los Angeles County leaders to work with the state to reopen its “surge” hospital and recommended that another in Long Beach swing open its doors, citing the need to fully reopen medical centers while also dealing with an expected surge in coronavirus cases.

The state-funded Los Angeles Surge Hospital, which opened on April 13 at the former site of the St. Vincent Medical Center amid heightened concern about having enough beds to deal with Covid-19 patients, has closed.

But Dr. Hector Flores, an Adventist Health White Memorial physician, told the county’s Board of Supervisors and his fellow members on the county’s Economic Resiliency Task Force that county officials should work to bring it back online. He also recommended that Long Beach Community Hospital — which has long been on the cusp of reopening — become a surge hospital.

The context in June is different, however, than it was in March and April, when public health officials were intensely concerned that the county’s hospital capacity would be overwhelmed by a never-before-seen virus that was spreading and killing exponentially.

Along with many other businesses, hospitals, too, shut down many services in an effort to grow bed capacity for COVID-19 patients. But those services were essential for many hospitals’ bottom line — everything from elective procedures to vital surgeries. Couple that with patients who were delaying or outright canceling vital non-coronavirus visits, and in the first 90 days of the pandemic in L.A. County, hospitals — typically among the largest employers — were shedding jobs and occupancy (which fell to about 40% collectively, according to Flores).

“Hospitals are like hotels. If they are not fully occupied they are losing money,” said Flores, who heads a working group on the county’s task force.

Ultimately, the industry took an estimated $15 billion hit, he said, and only now, in the past two weeks is it starting to recover as health orders are eased and 15,000 doctors and medical support staffs make their way back to their once-shuttered practices.

Flores, and his committee of healthcare leaders have been devising a framework for recovery in the healthcare sector of the county’s economy. They want to maintain those jobs in the $100-billion-a-year healthcare industry.

It’s a larger goal among county leaders, who started the resiliency task force to figure out how several of the region’s economic sectors can recover after being shut down for months.

But there’s a looming concern: A second wave of the virus.

Flores said recent coronavirus spikes in Orange and Ventura counties — which saw large crowds gathering at beaches over the Memorial Day holiday — are giving him pause.

And that’s prompted Flores and others to call for the county to work with state officials to reopen and keep surge hospitals open. The move would help regular hospitals keep their non-COVID business going but allow for more capacity, if needed.

As it stands, non-COVID patients are coming back. Hospitals over the last two to three weeks have gone from 40% to 85% occupancy rates.

“What that tells us is that if there is a surge there won’t be the same capacity that we had for the first 90 days (of the pandemic),” he said. “We’re concerned about the uptick we see in Ventura and Orange County, since on Memorial Day weekend they opened beaches, hiking trails and parks. Sadly, many people took advantage of that open environment without protection of masks and often congregating in clusters. We’re also waiting to see the impact of the protests in two weeks.”

Flores said as hospitals reopen and perform essential surgeries, they need “safe units” where patients can recover from an operation without the threat of being infected by the virus. And to do that, they need more space, he said.

“As we see a smaller number of beds available in hospitals, we are eventually going to rely on surge hospitals … because we anticipate there is quite likely going to be another surge if the patterns we see in Ventura and Orange counties come to play in Los Angeles,” Flores said.

The shuttered St. Vincent’s hospital, on a 10-acre campus in the Westlake District near Downtown Los Angeles, seemed essential when it was pressed into duty on April 13 after being closed in January. It quickly became part of the state’s plan to outfit roughly 50,000 more hospital beds to handle a surge of infected patients.

Ultimately, though, that surge never came. The hospital treated 65 people at a cost to taxpayers of nearly $15 million, the Southern California News Group reported.

It may very well stay that way. A spokesperson for the hospital said Tuesday that the hospital is “officially closed at the present time, there are no plans to reopen.”

Long Beach Community Hospital, too, was eyed. City leaders and officials from Molina, Wu, Network, Inc. — the hospital’s new operator — scurried to reopen it in the early COVID-19 days.

MWN said in late March that the facility was “days away” from opening, as Long Beach looked for capacity.  That never came. Plus, the U.S. Navy hospital ship Mercy, which arrived in Los Angeles in late March to help treat non-coronavirus patients, returned to San Diego after treating just 77 patients.

Meanwhile, regular hospitals were scambling to find room for the expected surge of COVID patients. But between that and the March “Safer-at-Home” order, hospitals suffered the unintended consequence of furlough and layoffs related to a shortage of “non-essential” medical work.

The county’s Department of Health Services says the decision to reopen the St. Vincent’s property lies with the state, which in consultation with Dignity Health and Kaiser, closed down operations as its contract was due to run out by the end of June.

Could it come back online?

“The opinion of the County is that a) currently we project having sufficient overall beds in the county to meet demand (with the exception of ICU which can be resolved by flexing bed types within existing hospitals) and b) surging our existing hospitals,” according to a statement.

Officials say adding beds at existing hospitals is a “better approach” because it makes use of the existing infrastructure. County health services officials add that all hospitals have the ability “to surge patients at least 20% above their normal capacity.”

As for Long Beach Community Hospital, health officials noted that it has not yet been approved to operate by licensing through the state.

“We would welcome LBCH coming on line as an additional acute care hospital, but need for them to meet state licensing criteria,” according to the statement.

L.A. County Public Health officials predict that with no change in the transmission rate of the disease, the demand for hospital beds will remain relatively stable, with some slight “up-trending” because of the easing of health-order restrictions.

If transmission increases by half above current levels, a June 10 county Department of Health Services projection concluded that nearly 70% of the county’s population will catch the virus by Dec. 1.

Hospitalizations across the county were down to 1,285 as of Monday from a peak of nearly 2,000 in late April. While the numbers have been down considerably, some hospitals have experienced a slight uptick in recent days. Whether that increase is the result of an oncoming surge has yet to be seen, according to Molly Lawson, spokeswoman for Centinela Hospital Medical Center in Inglewood.

“It’s really too early to tell,” Lawson said. “This week we had anticipated seeing the community impact of some of the protests and marches and all the activities happening of late.”

Centinela Hospital, which according to Lawson had one of the higher levels of hospitalization rates, treated about 70 COVID-19 patients in late April and early May. Patients occupied two full units, Lawson said. As of Tuesday, the hospital had 17 patients, just half a unit.

At Torrance Memorial Medical Center, which saw a peak of about 55 patients just as “Safer-at-Home” orders went into effect in late March, the hospital has been treating 15 to 21 patients for the past several weeks, according to spokeswoman Sandy Rodriguez. The lowest number of COVID-19 patients the hospital had admitted was 11.

“We have seen some intermittent increases, but no surge,” Rodriguez said.