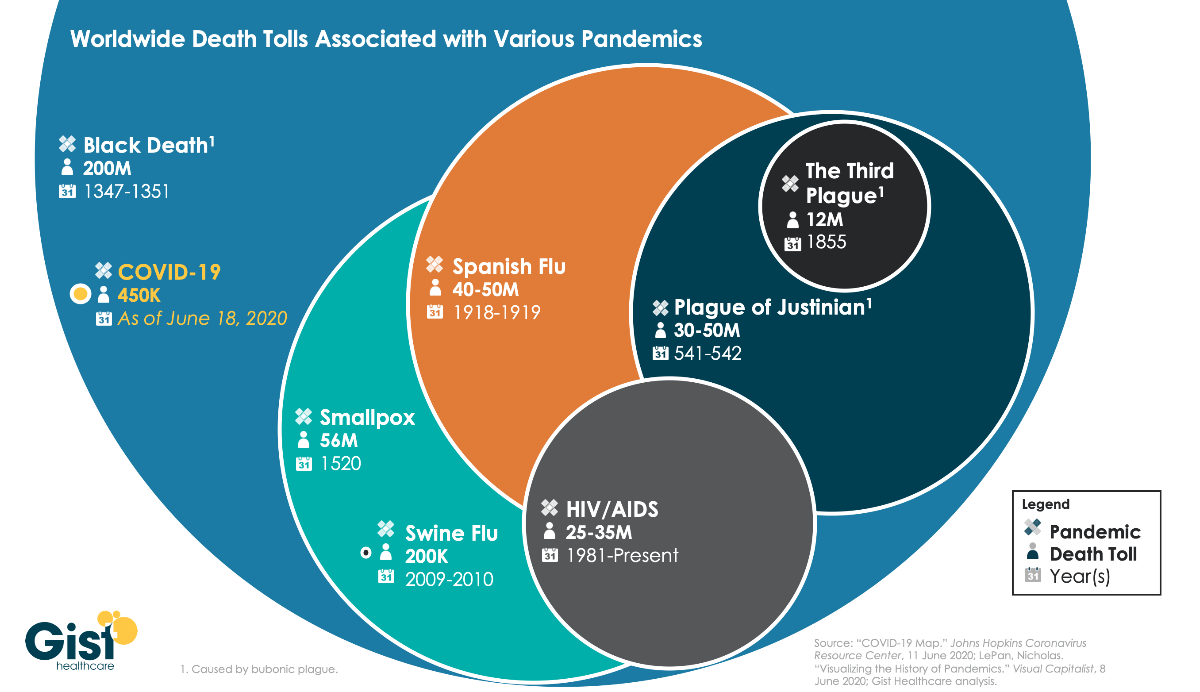 Although the coronavirus is easily the most disruptive disease event of our lifetimes, pandemics have ravaged humanity over history, leaving devastating death tolls in their tracks. This graphic compares lives lost in some of the worst worldwide pandemics on record. While a staggering 450,000 people have died from COVID-19 worldwide, the current pandemic represents a mere 0.2 percent of the deadliest plague in recorded human history, the Black Death.

Caused by the bubonic plague, the Black Death took an estimated 200 million lives over just a five-year span during the Middle Ages, killing an estimated 30 to 50 percent of Europe’s population. Arguably, the entire course of history was altered by the Black Death—will the same be true for COVID-19?

The 1918 Spanish Flu, the deadliest pandemic in modern history, claimed 40-50 million lives worldwide across 15 months. Unlike COVID-19, the Spanish Flu—caused by the H1N1 virus—was notable for being atypically fatal in otherwise healthy people, including in children younger than five and especially in adults between the ages of 20 and 40.

The Spanish Flu ebbed and flowed over three very distinct waves across two years, killing 675,000 Americans in total. That’s more than five-and-a-half times the current US COVID-19 death toll, but today we’re less than six months into the coronavirus pandemic.

The vast majority of Spanish Flu deaths occurred in the illness’s second wave, beginning in the fall of 1918—if history repeats itself, the worst of our current pandemic could still be in front of us.

One stark difference between 1918 and today: the advancement of medical science in the last century has allowed a swift, global effort to create a COVID-19 vaccine—over 125 vaccines are currently in development and 18 have progressed to human trials.