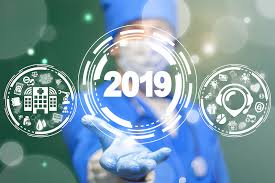 Hospital executives quit on the spot. Corporate giants took healthcare into their own hands. Flu hit the country hard. Nurses wanted to cut ties with Facebook. These and four other events and trends shaped the year in healthcare — and the lessons executives can take from them into 2019.

Roughly 80,000 Americans died of flu and related complications last winter, according to the CDC, along with a record-breaking estimate of 900,000 hospitalizations. That made 2017-18 the deadliest flu season since 1976, the date of the first published paper reporting total seasonal flu deaths, according to the CDC’s Kristen Nordlund.

The milestone flu season reflected a couple of trends. No. 1: Fee-for-service remains the dominant payment model in healthcare. Flu-related hospitalizations triggered financial gains for health systems and hospital networks. No. 2: A deadly flu season gave more weight to concerns about a flu pandemic, which weighs heavily on the minds of CDC Director Robert Redfield, MD, and Bill Gates, among others.

Not even one month into 2018, three corporate giants combined forces to lower healthcare costs for 1.2 million workers. Since the Jan. 30 announcement, Amazon, Berkshire Hathaway and JPMorgan Chase made several important hires: Surgeon, writer and policy wonk Atul Gawande, MD, started work as CEO of the health venture July 9. Soon after, Jack Stoddard, general manager for digital health at Comcast Corp., was appointed COO. More questions than answers remain about this corporate healthcare disruption, including how extensively the new entrants will redesign healthcare for their employees and how much they will collaborate with traditional healthcare providers.

While Dr. Gawande and Mr. Stoddard continue to build their healthcare-centric team to pursue an ambitious mission, remarks from a member of the old guard illustrate the frustration fueling these corporate giants’ foray into healthcare. “A lot of the medical care we do deliver is wrong — so expensive and wrong,” Charlie Munger, vice chairman of Berkshire Hathaway, said in a May interview with CNBC. “It’s ridiculous. A lot of our medical providers are artificially prolonging death so they can make more money.”

While someone briefed on the undertaking said the alliance does not plan to replace existing health insurers or hospitals, it will be fascinating to see how this partnership forces legacy providers to behave differently. Chief executives Jamie Dimon, Warren Buffett and Jeff Bezos are clearly dissatisfied with the way their employees’ healthcare has been accessed, delivered and priced to date.

The practice of two-week notice became less standard for hospital and health system leaders this year — especially CEOs. Becker’s covers roughly 100 executive moves per month, and the rate at which we wrote about executives abruptly leaving their hospitals in 2018 stood out from the norm. Executives normally provide ample notice of their departure from an organization, much more than the baseline of two weeks that’s expected for any industry or occupation. But in 2018 many more executives resigned immediately, withholding explanation for their sudden departure or bound by non-disclosures to keep it confidential. For the first time, we began publishing round-ups of executives who departed with little notice. Two months into the year, we had nearly a dozen to report.

Healthcare consistently has a high executive turnover rate — 18 percent in 2017. But 2018 was a year in which leadership churn became even more volatile with the swift and mysterious nature of executive exits. The uptick in unexplained resignations occurred during the #MeToo movement, but we don’t have the right information to draw any correlation between them. The frequency of “effective immediately” resignations will normalize this practice if it persists in 2019, which could prove detrimental to hospitals for a host of reasons. Transparency is important in healthcare; highly paid executives quietly walking away from their posts does not bode well for community affairs or physician engagement. It goes back to a lesson from media relations 101: “No comment” is the worst comment.

Several leading health systems kicked off 2018 by uniting to create a nonprofit, independent, generic drug company named Civica Rx to fight high drug prices and chronic shortages. The pharmaceutical entrant — backed by Intermountain Healthcare, HCA Healthcare, Mayo Clinic, Catholic Health Initiatives, Providence St. Joseph Health, SSM Health and Trinity Health — is led by CEO Martin Van Trieste, former chief quality officer for biotech giant Amgen. The company’s focus will be a group of 14 generic drugs, administered to patients in hospitals, that have been in short supply and increasingly expensive in recent years. The consortium has declined to name the drugs in development, but said it expects to have its first products on the market as early as 2019.

Intermountain CEO Marc Harrison, MD, exercised measure when describing the new drug company’s mission, noting that responsible pharmaceutical companies will fair fine, but those that have been unprincipled in the past with price increases or supply issues should watch out. Civica Rx may be starting with 14 drugs, but it has noted that there are nearly 200 generics it considers essential that have experienced shortages and price hikes.

Based on reactions from providers and on The Hill, the potential for Civica Rx to quickly gain participants and policy advocates seems rich. For instance, even before Civica Rx applied to the FDA for permission to manufacture drugs, the idea of the company caught hospitals’ interest nationwide. Dr. Harrison said approximately 120 healthcare companies — representing about one-third of hospitals in the U.S. — contacted Civica Rx organizers with interest in participating. Furthermore, lawmakers and regulators were quick to throw support behind the venture even though Congress has done little to get drug pricing under control. Dr. Harrison noted to Modern Healthcare that, as of November 2018, the collaborative “received tremendous bipartisan encouragement from elected officials and from regulatory agencies to continue with our efforts.”

Guns and shootings cemented as a healthcare issue

Gun violence was never outside the realm of health and wellness, but in 2018 the medical community passionately declared the issue as one within their jurisdiction. When the National Rifle Association tweeted Nov. 7 that “Someone should tell self-important anti-gun doctors to stay in their lane,” physicians were quick to respond with detailed, graphic stories and images of their encounters treating the aftermath of gun violence. The #ThisIsOurLane social media movement coincided with tragedy Nov. 19, when a man fatally shot a physician, pharmacist and police officer in Mercy Hospital in Chicago.

With the right resources, clinicians can become ardent advocates to better patients’ social determinants of health, including responsible gun ownership and use. Leavitt Partners released poll findings in spring 2018 in which physicians said they see how social determinants influence patients’ well-being, but do not yet have the resources to help with things like housing, hunger, transportation and securing health insurance. If the fervor of #ThisIsOurLane — and attention paid to it — is any indication, physicians deeply care about nonmedical issues that affect patients’ health. With the right resources, the medical community stands to become a powerful catalyst for change for a broad range of issues.

If health systems are serious about success under value-based payment models, they will empower clinicians with the support, partnerships and tools needed to intervene and improve social determinants of health for the good of their patients.

“When I have tried to conduct interviews with hospital executives about how they set their prices, I find that many are reluctant to comment,” Ms. Kliff wrote. By the end of her 15-month project, Ms. Kliff had read 1,182 ER bills from every state and wrote a dozen articles about individual patient’s financial experiences with hospitals (she was also on maternity leave from June through September). Her work produced some effective headlines. Case in point: “A baby was treated with a nap and a bottle of formula. His parents received an $18,000 bill.” In that case, the hospital reversed the family’s $15,666 trauma fee after Ms. Kliff published her report.

As of Jan. 1, Medicare requires hospitals to disclose prices publicly — but this change is unlikely to greatly benefit patients and consumers since list prices don’t reflect what insurers, government programs and patients pay. Furthermore, price transparency is but one of the problems Ms. Kliff encountered in her extensive reporting. Others include high prices for generic drug store items ($238 for eye drops that run $15 to $50 in a retail pharmacy), out-of-network physicians tending to patients who are visiting in-network hospitals, and ER facility fees. Hospitals reversed $45,107 in medical bills as a result of Ms. Kliff’s reporting. Based on the change spearheaded by her work and the Congressional attention paid to medical billing practices, hospitals and health systems shouldn’t quit their AHA-advised preparation on their own billing practices just yet. They also shouldn’t chalk much progress up to CMS-mandated price postings, because that information does not answer the questions Ms. Kliff set out to answer, including how hospital set their prices. There will only be more questions like this — from journalists, patients and lawmakers.

Optum ‘scaring the crap out of hospitals‘

Which business is keeping hospital leaders up at night? Many executives will tell you it’s not Amazon, not CVS, not One Medical — but Optum, the provider services arm of UnitedHealth Group. Optum was a key driver of the 11.7 percent gain UnitedHealth Group’s stock saw in 2018, which made it one of the top performers in the Dow Jones Industrial Average, according to Barron’s. Through its OptumCare branch, Optum employs or is affiliated with more than 30,000 physicians — roughly 8,000 more than Oakland, Calif.-based Kaiser Permanente.

Aside from directly competing for patients, Optum wants to hire or affiliate with the same MD-certified talent. It offers physicians three ways to do so: direct employment, network affiliation or practice acquisition. “OptumCare Medical Group offers recent medical school graduates the opportunity to practice medicine and become a valuable partner in their local community minus the hassles associated with the ever-changing business side of healthcare,” the company writes on its employment website.

It’s not just the physician force that makes Optum a serious concern for hospitals. Part of the challenge is that the $91 billion business has a hand in several healthcare buckets, expanding its presence as either a serious competitor/threat or a potential collaborator in multiple arenas since it is not easily categorized. For instance, consider the mountain of data Optum sits upon, with valuable insights related to utilization, costs and patient behaviors. “Because they are connected to UnitedHealth, they probably have more healthcare data than anyone on the planet,” the CEO of a $2.5 billion health system said.

For as much as we talk about the collision of Silicon Valley and healthcare, one of the year’s most vivid clashes came down to a dozen California nurses and Mark Zuckerberg, the chairman and CEO of Facebook and world’s third-richest person. San Francisco General Hospital and Trauma Center was renamed the Priscilla Chan and Mark Zuckerberg San Francisco General Hospital and Trauma Center in 2015 after Mr. Zuckerberg and his wife, Priscilla Chan, MD, gave $75 million to the organization.

Soon after the Facebook-Cambridge Analytica ordeal came to light, a dozen nurses protested and demanded Mr. Zuckerberg’s name be stripped from their hospital. His name is hardly synonymous with the protection of privacy, they argued. But philanthropy proves to be more of an art than a science. By November, even as a San Francisco politician pressed for the removal of the name, hospital CEO Susan Ehrlich, MD, said: “We are honored that Dr. Chan and Mr. Zuckerberg thought highly enough of our hospital and staff, and the health of San Franciscans, to donate their resources to our mission.”

The dispute illustrates the tension hospital and health system executives must deal with as cash-rich tech giants and venture capitalists make more high-profile forays into healthcare. Hospitals can use the cash, sure, but the alignment of value systems may present some challenges. 2018 was a year in which several tech companies faced problems with transparency, holding leaders publicly accountable, and diversity in hiring, among other issues. A dozen nurses protesting their hospital sharing a name with Mark Zuckerberg? That’s not the last time we’ll see clinicians urging wealthy but problematic tech icons to back off. Hospital executives will need to be adept in handling that tension and exercise urgency in their response.