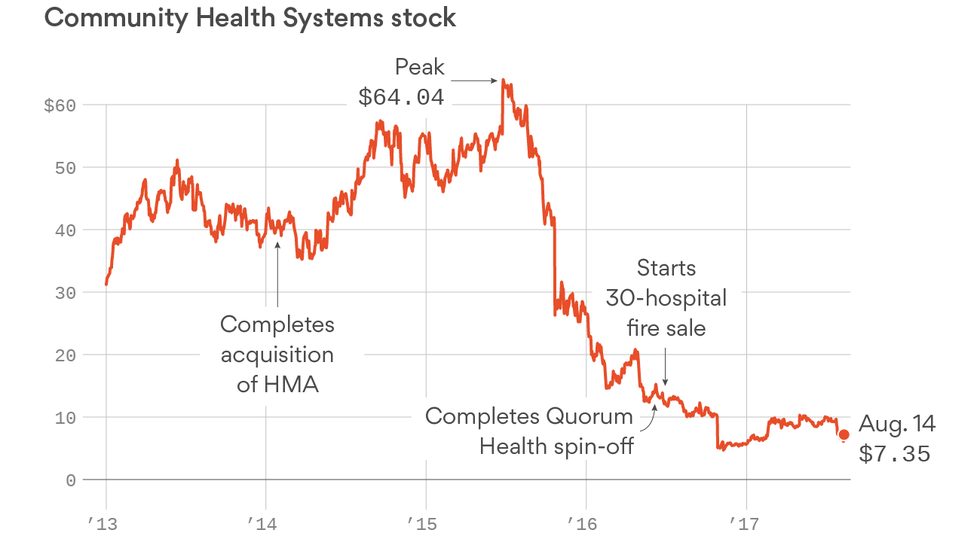 Just three years ago, Community Health Systems was the largest for-profit operator of hospitals with more than 200 facilities scattered in rural and suburban areas with growing populations. Now, the company is hemorrhaging money, sitting atop a mountain of debt and teetering on the edge of bankruptcy — all major reasons why CHS has lost almost 90% of its market value.

“I think the company has a nontrivial chance of defaulting,” said one CHS investor who asked to be unnamed because of the sensitivity of the issue. Tomi Galin, a CHS spokeswoman, did not make any company officials available for an interview, but said the company is confident it will have “a stronger core group of hospitals that are better positioned for long-term growth.”

Why it matters: CHS sits in a massive hole after a string of missteps, according to industry insiders. And it’s not likely to get better for CHS, or the local communities that rely on a CHS facility, as more people get treated in lower-cost outpatient centers instead of the hospital.

The collapse: It began in 2013 and continued into January 2014. That’s when CHS completed its acquisition of Health Management Associates, a for-profit hospital chain that had a slew of financial and legal problems. The deal was worth $7.6 billion, including debt, and made CHS the largest for-profit hospital company by number of facilities.

“That was the death knell,” a health care investment banker said. “HMA was a troubled company, and (CHS) thought bigger would be better.”

Here’s what has happened at CHS since then:

Looking ahead: CHS plans on divesting even more hospitals, executives said during their latest earnings call. They likely will be profitable hospitals, as buyers won’t touch money-losing inpatient facilities with dwindling admissions.

But large debt payments are due in 2019 through 2022. Short-term cash from transactions appears to be a bandage, and a subsequently smaller profit base won’t solve the big debt picture, making bankruptcy a real possibility, an investor said.

Galin, the CHS spokeswoman, said the money from the hospital sales “are being used to reduce our debt” and that “cash flow generation remains strong.”

Leadership questions: Many CHS executives have retired or left in the past two years, including longtime CFO Larry Cash. Wayne Smith, the CEO of the hospital chain since 1997, remains in his position. Smith is one of the highest earners among hospital executives and reaped more than $1 million in bonuses alone the past two years even though CHS’ stock price tanked.

Numerous sources would not go on the record to talk about CHS. One hospital industry analyst said this when asked how Smith still had his job despite the company’s problems: “Your question is very valid.”