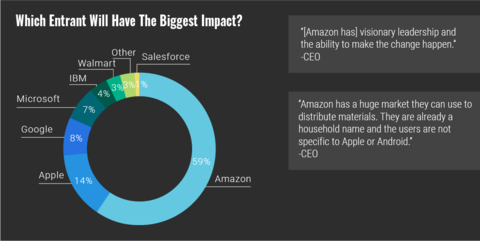 Out of all the technology giants with ambitions in healthcare, hospital executives have overwhelmingly put their faith in Amazon, according to a new survey.

A full 59% of executives say Amazon will have the biggest impact, according to the survey by Reaction Data. Respondents cited resources available to the retail and technology behemoth, the company’s current influence and name recognition.

Comparatively, 14% said Apple, with its foray into EHRs, would be the most influential, followed by Google at 8% and Microsoft at 7%

Among healthcare CEOs—which accounted for 26 of the survey’s 97 respondents—75% said Amazon would make the biggest impact.

About 80% of survey respondents were from the C-suite, including chief nursing officers, chief financial officers and chief information officers.

While Amazon alone may be generating significant excitement in boardrooms, a previous survey by HealthEdge shows consumers are largely skeptical about Amazon’s partnership with JPMorgan and Berkshire Hathaway.

Amazon’s push into healthcare “has been a shot across the bow for the entire industry,” Rita Numerof, Ph.D., president of Numerof & Associates told FierceHealthcare. The company’s consistent and deliberate investments indicate they are serious about making substantial changes within the industry.

“Amazon is known for its relentless focus on the consumer and its ability to use data systematically to identify and meet unmet needs in an accessible manner,” she said. “Unfortunately, access, consumer engagement, and segmentation haven’t been the hallmark of healthcare delivery.”

Executives were also bullish on telemedicine, with 29% saying the technology would have the biggest impact on healthcare, followed by artificial intelligence at 20%. That’s less surprising given that nearly 75% of respondents were already using telehealth in some way.However, 51% of respondents said telemedicine is revenue neutral, and key focus areas were split equally around rural patients, follow-up care and managing specific populations.