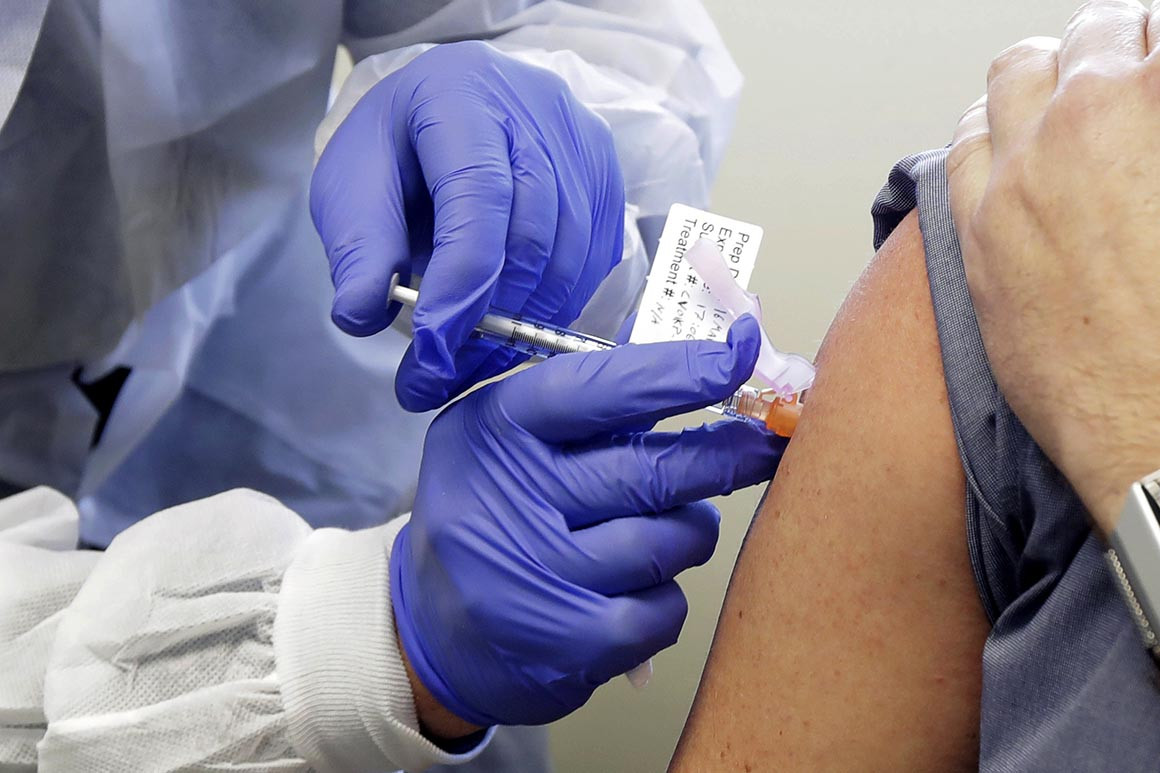 Pharmaceutical companies are using the media to tout treatments that are still under review.

Vaccine maker Moderna attracted glowing headlines and bullish investors when it revealed that eight participants in a preliminary clinical trial of its coronavirus vaccine had developed antibodies to the virus. The company’s share price jumped nearly 20 percent that day as it released a massive stock offering.

But the full results of the 45-person safety study haven’t been published, even though Moderna began a second, larger trial in late May aimed at determining whether the vaccine works. Several vaccine researchers say the scant public information on the earlier safety study is hard to evaluate because it addresses less than 20 percent of participants.

Call it science by press release — a tactic that pharmaceutical companies are increasingly relying upon to set their experimental coronavirus drugs and vaccines apart in a crowded field, shape public opinion and court regulators. Public health experts say the approach could increase political pressure on federal health officials to green-light drugs and vaccines before it is clear they are safe or effective, with potentially dangerous consequences.

“There’s a long history of pharmaceutical manufacturers putting out self-serving press releases related to clinical trial data that they’re developing that present an overly rosy picture of the data, usually with a boilerplate disclaimer at the end, which is fairly useless,” said Aaron Kesselheim, a professor of medicine at Harvard Medical School who studies drug regulation and pricing.

There are already signs of hype and political pressure influencing the U.S.’ coronavirus response. The Food and Drug Administration authorized emergency use of the malaria drug hydroxychloroquine in March without any proof that it was safe or effective for coronavirus patients — but with the backing of President Donald Trump, who had begun touting the treatment during daily White House briefings.

Subsequent studies have found that hydroxychloroquine doesn’t help those with Covid-19 and can cause potentially fatal side effects. And a top government scientist, Rick Bright, filed a whistleblower complaint in May alleging that he was ousted from his job leading the Biomedical Advanced Research Authority after he resisted political pressure to greenlight widespread use of the drug.

“The FDA has remained an unwavering, science-based voice helping to guide the all-of-government response,” agency Commissioner Stephen Hahn said in a statement. “I have never felt any pressure to make decisions, other than the urgency of the situation around COVID-19.”

But observers aren’t so sure. “From the outside looking in, there seems to be more political pressure than ever,” said Marc Scheineson, a former associate commissioner at the FDA and head of the FDA group at Alston & Bird. “The example in the White House is trickling down and there is a lot of pressure on the FDA … to color information on the optimistic side for political purposes and that is a hugely disturbing trend.”

A spokesperson for Moderna, which has received nearly a half billion dollars from the U.S. government and praise from Trump, said the company previewed its vaccine trial results by press release because it was concerned that the data might leak. The National Institutes of Health’s top infectious disease expert, Anthony Fauci, had hinted at the results in an interview with National Geographic, and data from a trial of the experimental drug remdesivir had leaked in April.

“You had this data moving widely around NIH and the remdesivir leak was also in our minds,” the Moderna spokesperson said.

But Peter Bach, director of Memorial Sloan-Kettering’s Center for Health Policy and Outcomes, said Moderna’s effort to preview its findings in the press “could be construed as an effort to make sure they are part of the conversation — and it worked on that front.”

Other groups have also previewed their hotly anticipated vaccine studies in the press. In late April, The New York Times revealed that six monkeys given a vaccine developed by researchers at the U.K.’s University of Oxford had stayed healthy for 28 days despite sustained exposure to the coronavirus. The article quoted Vincent Munster, a researcher at the NIH’s Rocky Mountain Laboratory, which conducted the monkey study at the British scientists’ behest.

The Oxford researchers, who signed a deal with AstraZeneca two days later to develop the experimental vaccine, did not publish a formal scientific analysis of the monkey data until mid-May. The study revealed that the noses of vaccinated monkeys and unvaccinated monkeys contained similar levels of coronavirus particles, suggesting that the vaccinated animals could still spread the disease — and the vaccine might not be as effective as the earlier data had hinted.

Liz Derow, a spokesperson for Oxford’s Jenner Institute, where the vaccine researchers are based, said they did not give the monkey data to The New York Times. The NIH’s National Institute of Allergy and Infectious Disease, which operates the Rocky Mountain Laboratory, said it did not provide the data to the newspaper — but one of its researchers, Vincent Munster, spoke to a Times reporter about the monkey findings at the request of the Jenner Institute.

“I was really disturbed by not just Moderna, but the Oxford group as well, presenting a press release without data, without a scientific review, without knowing what the press release was based on,” said Barry Bloom, an immunologist at the Harvard School of Public Health. “And very positively enough to raise the stock price so two days later officials within the company sold their stock and made a whole lot of money, whether or not the vaccine works.”

Four of the pharmaceutical firm’s top executives together saw gains of $29 million from prescheduled sales of shares in the company in the two days following the vaccine announcement. The company has not yet responded to a request for comment on the stock sales.

Neither the Oxford nor Moderna vaccines are available to the public. But some drugs whose safety and efficacy are now being studied have already been repurposed or authorized for emergency use during the pandemic. The rush to release snippets of information on drug trials to the press ahead of full results has left some doctors wondering how to best treat their patients.

After leaked data from a trial of Gilead’s experimental antiviral remdesivir suggested the drug might be the first shown to help coronavirus patients, the company put out a press release in late April teasing results from a larger, government-run study. Hours later, Fauci revealed some findings of the study during an Oval Office press spray.

But the full analysis of the NIAID trial results was not published until three weeks later. Until that point, frontline physicians had no way to know that patients on ventilators did not benefit from remdesivir treatment — meaning that doctors may have inadvertently wasted some of the United States’ limited stock of the drug.

This lack of understanding on how to use remdesivir was evident in a recent survey more than 250 hospitals by the American Society of Health-System Pharmacists, which found that just 15 percent planned to use their remdesivir doses as described in the FDA’s emergency authorization for the drug.

Andre Kalil, an infectious disease doctor at the University of Nebraska Medical Center who led the NIAID trial, told POLITICO that physicians could have patterned their use of remdesivir on the dosages given during the trial.

Others say doctors using experimental treatments should have as much information as possible.

“If we want doctors to make rational medical decisions based on data, then before an authorized product reaches patients, the data should be available to review in some way, not just a press release,” said Walid Gellad, director of the University of Pittsburgh’s Center for Pharmaceutical Policy and Prescribing.

Kesselheim, too, said that clinical trial data should be made public alongside any emergency authorizations to give physicians “the maximum amount of help they need in figuring out how to prescribe the drug.”

Gilead did not respond to a request for comment. But NIAID said that the urgency of the coronavirus prompted Fauci to share initial results before a full analysis was ready for publication.

Ivan Oransky, a professor of medical journalism at New York University and co-founder of the blog Retraction Watch, which monitors errors and misconduct in scientific research, told POLITICO he fears that the temptation to conduct science by press release will get “worse before it gets better.”

The world is growing more desperate for drugs and vaccines that could bring the coronavirus to heel. And many members of the public and politicians are treating every scrap of scientific information about the pandemic equally, he said — whether data comes from a peer-reviewed study or a company press release.

“There have been mechanisms to review science critically that, given the speed of Covid, have gone out the window,” said Bloom.

And interpreting results of clinical trial data can be difficult under the best of circumstances — especially when that data concerns a virus that was unknown to science until December of last year. When to end a trial and which conclusions to highlight are in many cases a matter of discretion, said Scheineson.

“It’s an art, not a science, in that respect,” he said. “I, for one, will not be the first in line to the new Moderna vaccine.”