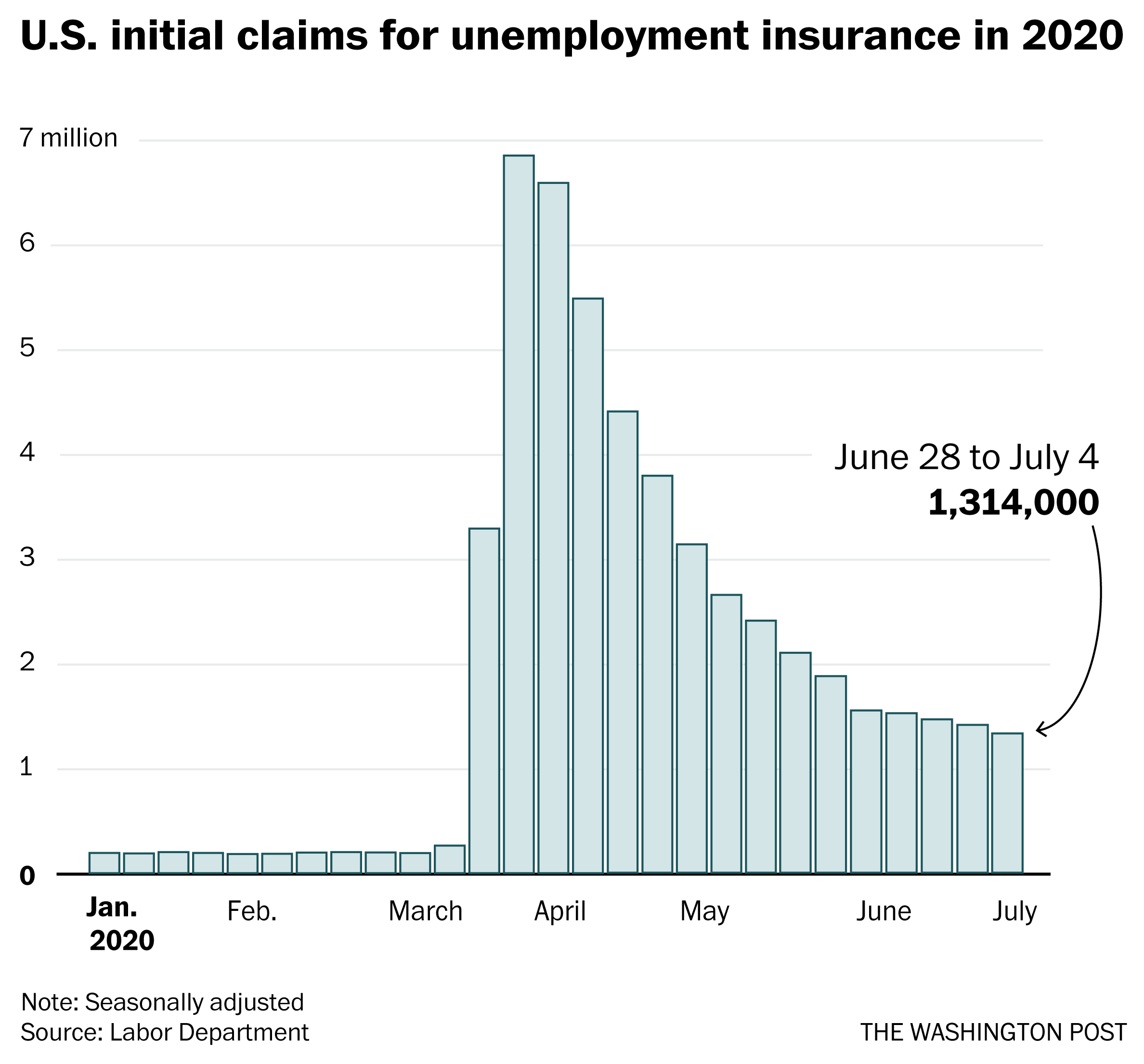 Another 1.3 million people filed for unemployment for the first time last week, a slight decrease from the week before, as novel coronavirus cases and closures surged around the country, according to data released Thursday by the Department of Labor.

The numbers of new unemployment filings have remained above a million each week since the pandemic began mid-March. That number has averaged about 1.4 million the past four weeks.

In addition, states reported that another 1 million claims were made under the Pandemic Unemployment Assistance program, which grants jobless benefits for gig workers, self-employed workers and contractors, the agency reported.

When combined, the two numbers for initial unemployment claims have ticked up the past three weeks, from 2.24 million in mid-June to 2.44 million last week.

The numbers for the first few days of July come as rising cases of coronavirus infections have hit states and counties nationwide, touching off a new round of closures and restrictions and sending some workers back to the unemployment insurance queue for the second time in just a few short months.

“The bad news is that initial claims are still historically very high and they suggest that damage is continuing to accumulate in the economy,” Adam Ozimek, chief economist at Upwork, said in an interview.

The unemployment rate, which is tabulated separately from the weekly jobless claims, has trended downward the past two months, to 11.1 percent last month, as many laid off or furloughed workers in industries like food service and retail were called back to work. Yet a rising number of workers have reported permanent layoffs.

And the jobless statistics don’t capture the damage from the new round of cases yet.

“All these factors look more like an economy that is riding into a recession than out of one,” Ozimek said. “At this stage in the game, when we’re this far from initial shock, it becomes less likely that new layoffs are the types of jobs that snap back.”

The numbers of people continuously receiving benefits at the end of June has also trended gradually downward. The last week of June saw 18.1 million people on unemployment insurance, down from 19.3 million people the week before that, as re-hirings have slightly outpaced new layoffs week by week.

But as hopes fade for a quick rebound from the pandemic — the United States reported more than 60,000 new cases on Wednesday, a new high — signs of longer term economic damage are emerging.

Levi Strauss & Co. said this week that it planned to cut about 15 percent of its nonretail and nonmanufacturing positions, or about 700 jobs this year. United Airlines warned it may need to furlough nearly 40 percent of its workforce this year, about 36,000 employees. Industrial and aerospace manufacturer the Barnes Group said it would layoff 400 workers; BAE Systems, a defense and aerospace company, said it planned to layoff 300 employees.

There are many workers like Samantha Hartman, 29, whose temporary layoff — she was furloughed in March from Rosen Hotels & Resorts, the hospitality company she works for in Orlando — became permanent this week.

Hartman said her supervisor called her this week to tell her that the company had tried to come up with a way to keep employees but found their hands tied with almost no business coming in.

“Everything is up in the air,” Hartman said. “I fully expect not to find another job in this industry.”

The company, which received a Paycheck Protection Program small business loan of more than $6 million according to the Orlando Sentinel, announced Wednesday that it would layoff a “substantial” amount of its workforce by July 31.

Hartman, who has a heart condition, said the company is letting her keep her health care through August. She moved to Orlando two years ago for the job. Now, she says she’ll probably move back with her family in California when her lease is up next year.

She said Florida’s challenges — including large delays in unemployment insurance processing, mishandling of the coronavirus response, a governor she doesn’t trust — make her less likely to stay in Florida. “If I’m going to struggle financially, I’d rather do that back home where I have a support system,” Hartman said.

Plunging consumer demand amid the virus’s surge and ensuing shutdowns have shuttered businesses across the country. Bed Bath & Beyond announced it would close 200 stores; Brooks Brothers, which filed for bankruptcy protection this week, said it would close 51 stores.

And there’s a grim waiting game for what are expected to be widespread layoffs in state and municipal governments, as budgets are drastically pared to meet declining tax revenue.

Initial weekly jobless claims remain well above the record before the pandemic, of 695,000 in 1982. They have dropped every week since the peak of 6.9 million, from a week in late March, but have plateaued for more than a month.