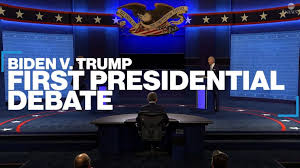 President Donald Trump and former Vice President and Democratic presidential nominee Joe Biden sparred over the future of the ACA, the COVID-19 pandemic and health insurance during a 90-minute debate in Cleveland Sept. 29.

1. Moderator and Fox News host Chris Wallace opened the debate with the topic of President Trump’s nomination of Judge Amy Coney Barrett of the U.S. Court of Appeals for the 7th Circuit to the U.S. Supreme Court. In the first few minutes of the debate, the discussion turned to the future of the ACA should Ms. Coney Barrett join the Supreme Court. A week after the November presidential election, the Supreme Court is set to hear a lawsuit, supported by the Trump administration, that seeks to overturn the ACA.

3. Mr. Wallace questioned the president about his promise to repeal and replace the ACA, adding that President Trump hadn’t released a comprehensive plan to replace the health law despite pledges to do so. The president disagreed with that, saying he had gotten rid of the individual mandate. Mr. Wallace said eliminating the mandate was not a comprehensive plan. Mr. Wallace called President Trump’s recent executive orders on preexisting conditions and surprise billing “largely symbolic.” President Trump disagreed, but did not tell how the executive orders would be implemented.

4. The president said drug prices would be coming down “80 or 90 percent.” The president highlighted insulin, which he said he’s getting so inexpensively, “it’s like water.” Insulin continues to retail for about $300 per vial, according to STAT, but cheaper insulin prices could be coming for some seniors. CMS recently said it is expanding the number of Medicare Advantage plans that provide insulin for a $35 or less monthly copay.

5. In an exchange with Mr. Biden, President Trump accused the Democratic Party of wanting “socialist medicine,” and claimed Mr. Biden wants to end private insurance. Mr. Biden denied those claims and said his health plan, which includes expanded ACA subsidies and a public option, would allow employees to keep their private health insurance. He has not supported Medicare-for-All proposals.

6. On the topic of the pandemic, Mr. Wallace asked President Trump about differing timelines for a vaccine that have been presented by him versus federal scientists like CDC Director Robert Redfield, MD. The president said he has spoken with Pfizer, Moderna and Johnson & Johnson, who’ve said “they can go faster” on a vaccine, but “it’s a very political thing.” He added that the military is already set up to distribute vaccines. Mr. Biden questioned Americans’ trust in the process. A Sept. 29 poll from the Axios/Ipsos Coronavirus Index found 8 in 10 Americans wouldn’t likely get a first generation COVID-19 vaccine if the president said it was safe.

7. President Trump and Mr. Biden took different stances on masks. Mr. Biden cited Dr. Redfield’s renewed call to wear masks, and said masking up and social distancing would save 100,000 lives between now and January. President Trump responded by saying, “They’ve said the opposite.” He alluded to early in the pandemic when public health experts, including Anthony Fauci, MD, director of the National Institute of Allergy and Infectious Diseases, were slow to recommend widespread mask-wearing before scientists better understood how the virus spreads. The CDC currently recommends that every American wear a mask.