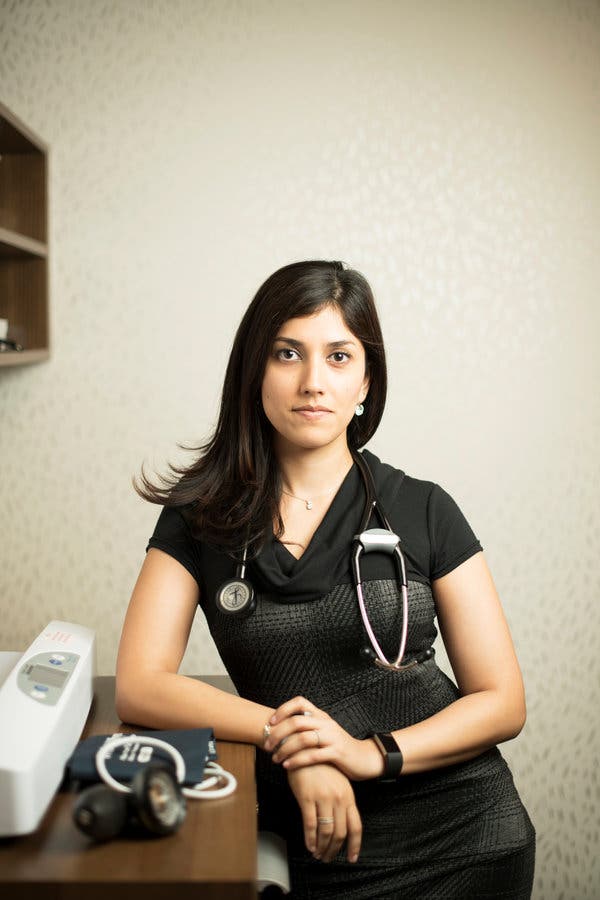 Is the doctor in?

In this new medical age of urgent care centers and retail clinics, that’s not a simple question. Nor does it have a simple answer, as primary care doctors become increasingly scarce.

“You call the doctor’s office to book an appointment,” said Matt Feit, a 45-year-old screenwriter in Los Angeles who visited an urgent care center eight times last year. “They’re only open Monday through Friday from these hours to those hours, and, generally, they’re not the hours I’m free or I have to take time off from my job.

“I can go just about anytime to urgent care,” he continued, “and my co-pay is exactly the same as if I went to my primary doctor.”

That’s one reason big players like CVS Health, the drugstore chain, and most recently Walmart, the giant retailer, are eyeing deals with Aetna and Humana, respectively, to use their stores to deliver medical care.

People are flocking to retail clinics and urgent care centers in strip malls or shopping centers, where simple health needs can usually be tended to by health professionals like nurse practitioners or physician assistants much more cheaply than in a doctor’s office. Some 12,000 are already scattered across the country, according to Merchant Medicine, a consulting firm.

On the other side, office visits to primary care doctors declined 18 percent from 2012 to 2016, even as visits to specialists increased, insurance data analyzed by the Health Care Cost Institute shows.

There’s little doubt that the front line of medicine — the traditional family or primary care doctor — has been under siege for years. Long hours and low pay have transformed pediatric or family practices into unattractive options for many aspiring physicians.

And the relationship between patients and doctors has radically changed. Apart from true emergency situations, patients’ expectations now reflect the larger 24/7 insta-culture of wanting everything now. When Dr. Carl Olden began watching patients turn to urgent care centers opening around him in Yakima, Wash., he and his partners decided to fight back.

They set up similar clinics three years ago, including one right across the street from their main office in a shopping center.

The practice not only was able to retain its patients, but then could access electronic health records for those off-site visits, avoiding a bad drug interaction or other problems, said Dr. Olden, who has been a doctor for 34 years.

“And we’ve had some folks come into the clinics who don’t have their own primary care physicians,” he said. “So we’ve been able to move them into our practice.”

By opening clinics to compete with urgent care centers, Dr. Carl Olden’s practice in Yakima, Wash., was able to retain its patients and move some walk-ins into the fold.
Merger Maneuvers

The latest involves Walmart and Humana, a large insurer with a sizable business offering private Medicare plans. While their talks are in the early stages, one potential partnership being discussed would center on using the retailer’s stores and expanding its existing 19 clinics for one-stop medical care. Walmart stores already offer pharmacy services and attract older people.

In addition, the proposed $69 billion merger between CVS Health, which operates 1,100 MinuteClinics, and Aetna, the giant insurer, would expand the customer bases of both. The deal is viewed as a direct response to moves by a rival insurer, UnitedHealth Group, which employs more than 30,000 physicians and operates one of the country’s largest urgent-care groups, MedExpress, as well as a big chain of free-standing surgery centers.

While both CVS and UnitedHealth have large pharmacy benefits businesses that would reap considerable rewards from the stream of prescriptions generated by the doctors at these facilities, the companies are also intent on managing what type of care patients get and where they go for it. And the wealth of data mined from consolidation would provide the companies with a map for steering people one way or another.

On top of these corporate partnerships, Amazon, JP Morgan and Berkshire Hathaway decided to join forces to develop some sort of health care strategy for their employees, expressing frustration with the current state of medical care. Their announcement, and Amazon’s recent forays into these fields, are rattling everyone from major hospital networks to pharmacists.

Doctors, too, are watching the evolution warily.

“With all of these deals, there is so much we don’t know,” said Dr. Michael Munger, president of the American Academy of Family Physicians. “Are Aetna patients going to be mandated to go to a CVS MinuteClinic?”

Dr. Susan Kressly, a pediatrician in Warrington, Pa., has watched patients leave. Parents who once brought their children to her to treat an ear infection or check for strep, services whose profits helped offset some of the treatments she offered, are now visiting the retail clinics or urgent care centers.

What is worse, some patients haven’t been getting the right care. “Some of the patients with coughs were being treated with codeine-based medicines, which is not appropriate at all for this age group,” Dr. Kressly said.

Even doctors unfazed by patients going elsewhere at night or on weekends are nervous about the entry of the corporate behemoths.

And doctors keep facing new waves of competition. In California, Apple recently decided to open up its own clinics to treat employees. Other companies are offering their workers the option of seeking medical care via their cellphones. Investors are also pouring money into businesses aiming to create new ways of providing primary care by relying more heavily on technology.

Dr. Olden’s office door. In the age of urgent care centers and consolidations, the traditional doctor is being pushed closer to extinction.CreditDavid Ryder for The New York Times

An Absence of Proof

Dr. Mark J. Werner, a consultant for the Chartis Group, which advises medical practices, emphasized that convenience of care didn’t equal quality or, for that matter, less expensive care.

“None of the research has shown any of these approaches to delivering care has meaningfully addressed cost,” Dr. Werner said.

Critics of retail clinics argue that patients are given short shrift by health professionals unfamiliar with their history, and may be given unnecessary prescriptions. But researchers say neither has been proved in studies.

“The quality of care that you see at a retail clinic is equal or superior to what we see in a doctor’s office or emergency department,” said Dr. Ateev Mehrotra, an associate professor of health care policy and medicine at Harvard Medical School, who has researched the retail clinics. “And while there is a worry that they will prescribe antibiotics to everybody, we see equal rates occurring between the clinics and doctor’s offices.”

Still, while the retail clinics over all charge less, particularly compared with emergency rooms, they may increase overall health care spending. Consumers who not long ago would have taken a cough drop or gargled with saltwater to soothe a sore throat now pop into their nearby retail clinic for a strep test.

Frustration with the nation’s health care system has fueled a lot of the recent partnerships. Giant companies are already signaling a desire to tackle complex care for people with a chronic health condition like diabetes or asthma.

“We’re evolving the retail clinic concept,” said Dr. Troyen A. Brennan, the chief medical officer for CVS. The company hopes its proposed merger with Aetna will allow it to transform its current clinics, where a nurse practitioner might offer a flu shot, into a place where patients can have their conditions monitored. “It requires new and different work by the nurse practitioners,” he said.

Dr. Brennan said CVS was not looking to replace patients’ primary care doctors. “We’re not trying to buy up an entire layer of primary care,” he said.

But people will have the option of using the retail clinic to make sure their hypertension or diabetes is well controlled, with tests and counseling provided as well as medications. The goal is to reduce the cost of care for what would otherwise be very expensive conditions, Dr. Brennan said.

If the company’s merger with Aetna goes through, CVS will initially expand in locations where Aetna has a significant number of customers who could readily go to CVS, Dr. Brennan said.

UnitedHealth has also been aggressively making inroads, adding a large medical practice in December and roughly doubling the number of areas where its OptumCare doctors will be to 75 markets in the United States. It is also experimenting with putting its MedExpress urgent care clinics into Walgreens stores.

Big hospital groups are also eroding primary care practices: They employed 43 percent of the nation’s primary care doctors in 2016, up from 23 percent in 2010. They are also aggressively opening up their own urgent care centers, in part to try to ensure a steady flow of patients to their facilities.

One Medical has centers in eight cities with 400 providers, making it one of the nation’s largest independent groups.

HCA Healthcare, the for-profit hospital chain, doubled its number of urgent care centers last year to about 100, according to Merchant Medicine. GoHealth Urgent Care has teamed up with major health systems like Northwell Health in New York and Dignity Health in San Francisco, to open up about 80 centers.

“There is huge consolidation in the market right now,” said Dr. Jeffrey Le Benger, the chief executive of Summit Medical Group, a large independent physician group in New Jersey. “Everyone is fighting for the primary care patient.” He, too, has opened up urgent care centers, which he describes as a “loss leader,” unprofitable but critical to managing patients.

Eva Palmer, 22, of Washington, D.C., sought out One Medical, a venture-backed practice that is one of the nation’s largest independent groups, when she couldn’t get in to see a primary care doctor, even when she became ill. After paying the annual fee of about $200, she was able to make an appointment to get treatment for strep throat and pneumonia.

“In 15 minutes, I was able to get the prescriptions I needed — it was awesome,” Ms. Palmer said.

Patients also have the option of getting a virtual consultation at any time.

By using sophisticated computer systems, One Medical, which employs 400 doctors and health staff members in eight major cities, allows its physicians to spend a half-hour with every patient.

Dr. Navya Mysore joined One Medical after working for a large New York health system, where “there was a lot of bureaucracy,” she said. She now has more freedom to practice medicine the way she wants and focus more on preventive health, she said.

By being so readily available, One Medical can reduce visits to an emergency room or an urgent care center, said Dr. Jeff Dobro, the company’s chief medical officer.

As primary care doctors become an “increasingly endangered species, it is very hard to practice like this,” he said.

But more traditional doctors like Dr. Purifoy stress the importance of continuity of care. “It takes a long time to gain the trust of the patient,” he said. He is working with Aledade, another company focused on reinventing primary care, to make his practice more competitive.

One longtime patient, Billy Ray Smith, 70, learned that he needed cardiac bypass surgery even though he had no symptoms. He credits Dr. Purifoy with urging him to get a stress test.

“If he hadn’t insisted,” Mr. Smith said, “it would have been all over for me.” Dr. Purifoy’s nurse routinely checks on him, and if he needs an appointment, he can usually see the doctor that day or the next.

Those relationships take time and follow-up. “It’s not something I can do in a minute,” Dr. Purifoy said. “You’re never going to get that at a MedExpress.”