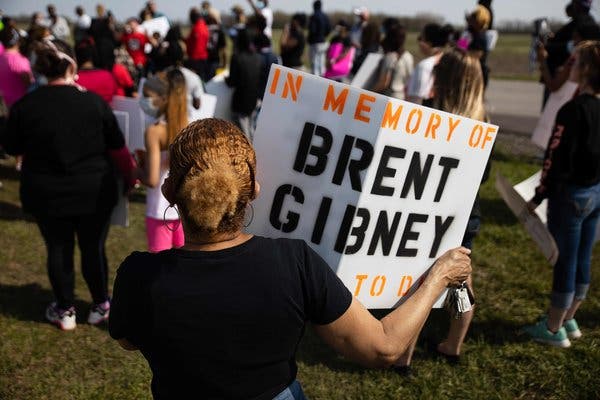 Prison officials have been reluctant to do widespread virus testing even as infection rates are escalating.

Cases of the coronavirus in prisons and jails across the United States have soared in recent weeks, even as the overall daily infection rate in the nation has remained relatively flat.

The number of prison inmates known to be infected has doubled during the past month to more than 68,000. Prison deaths tied to the coronavirus have also risen, by 73 percent since mid-May. By now, the five largest known clusters of the virus in the United States are not at nursing homes or meatpacking plants, but inside correction institutions, according to data The New York Times has been collecting about confirmed coronavirus cases since the pandemic reached American shores.

And the risk of more cases appears imminent: The swift growth in virus cases behind bars comes as demonstrators arrested as part of large police brutality protests across the nation have often been placed in crowded holding cells in local jails.

A muddled, uneven response by corrections officials to testing and care for inmates and workers is complicating the spread of the coronavirus. In interviews, prison and jail officials acknowledged that their approach has largely been based on trial and error, and that an effective, consistent response for U.S. correctional facilities remains elusive.

“If there was clearly a right strategy, we all would have done it,” said Dr. Owen Murray, a University of Texas Medical Branch physician who oversees correctional health care at dozens of Texas prisons. “There is no clear-cut right strategy here. There are a lot of different choices that one could make that are going to be in-the-moment decisions.”

The inconsistent response to the spread of the coronavirus in correctional facilities is in contrast with efforts to halt its spread in other known incubators of the virus: Much of the cruise ship industry has been closed down. Staff members and residents of nursing homes in several states now face compulsory testing. Many meat processing plants have been shuttered for extensive cleaning.

As the toll in prisons has increased, so has fear among inmates who say the authorities have done too little to protect them. There have been riots and hunger strikes in correctional facilities from Washington State to New York. And even the known case numbers are likely a significant undercount because testing has been extremely limited inside prisons and because some places that test do not release the results to the public.

“It’s like a sword hanging over my head,” said Fred Roehler, 77, an inmate at a California prison who has chronic inflammatory lung disease and other respiratory ailments. “Any officer can bring it in.”

Public officials have long warned that the nation’s correctional facilities would likely become vectors in the pandemic because they are often overcrowded, unsanitary places where social distancing is impractical, bathrooms and day rooms are shared by hundreds of inmates, and access to cleaning supplies is tightly controlled. Many inmates are 60 or older, and many suffer from respiratory illnesses or heart conditions.

In response, local jails have discharged thousands of inmates since February, many of whom had been awaiting trials to have charges heard or serving time for nonviolent crimes. State prison systems, where people convicted of more serious crimes are housed, have been more reluctant to release inmates.

Testing for the virus within the nation’s penal institutions varies widely, and has become a matter of significant debate.

Republican-led states like Texas, Tennessee and Arkansas — which generally spend less on prisoners than the national average — have found themselves at the forefront of testing inmates.

In Texas, the number of prisoners and staff members known to be infected has more than quadrupled to 7,900 during the past three weeks after the state began to test every inmate.

Yet states that typically spend far more on prisons have carried out significantly less testing.

California, which spends $12 billion annually on its prison system, has tested fewer than 7 percent of inmates in several of its largest, most crowded facilities, according to the state’s data. Other Democratic-led states that also spend heavily on prisons, including New York, Oregon and Colorado, have also conducted limited testing despite large outbreaks in their facilities.

New York has tested about 3 percent of its 40,000 prison inmates; more than 40 percent of those tested were infected.

Critics say that the dearth of testing in some facilities has meant that prison and public health officials have only vague notions about the spread of the virus, which has allowed some elected officials to suggest that it is not present at all.

“We have really no true idea of how bad the problem is because most places are not yet testing the way they should,” said Dr. Homer Venters, who served as chief medical officer for the New York City jail system and now works for a group called Community Oriented Correctional Health Services, which works to improve health care services in local jails. “I think a lot of times some of the operational challenges of either not having adequate quarantine policies or adequate medical isolation policies are so vexing that places simply decide that they can just throw up their hands.”

Most state prison systems have conducted few tests. Systems in Illinois, Mississippi and Alabama have tested fewer than 2.5 percent of inmates. And in Louisiana, officials had tested several dozen of its 31,000 inmates in March when the warden and medical director at one of the state’s largest prisons died of the coronavirus. The state has since announced plans to test every inmate.

Prison officials in states where only a limited number of inmates have been tested say they are following federal guidelines. The Centers for Disease Control and Prevention recommend that only prisoners with symptoms be tested.

Prisons that have conducted mass testing have found that about one in seven tests of inmates have come back positive, the Times database shows. The vast majority of inmates who have tested positive have been asymptomatic.

Public health officials say that indicates the virus has been present in prison populations for far longer than had previously been understood.

“If you don’t do testing, you’re flying blind,” said Carlos Franco-Paredes, an infectious-disease specialist at the University of Colorado School of Medicine.

But in California, there continues to be reluctance to test each of the state’s 114,000 inmates, despite growing criticism to take a more aggressive approach. One in six inmates in the state’s prisons have been tested, and the state has released some inmates who were later found to have the virus, raising fears that prison systems could seed new infections outside penal institutions.

“Nothing significant had been done to protect those most vulnerable to the virus,” said Marie Waldron, the Republican minority leader of the California State Assembly.

But J. Clark Kelso, who oversees prison health care in California, said that mass testing would provide only a snapshot of the virus’s spread.

“Testing’s not a complete solution,” Mr. Kelso said. “It gives you better information, but you don’t want to get a false sense of security.”

California’s health department has recommended that a facility’s prison inmates and staff members be given priority for testing once an infection has been identified there.

But the state prison system has conducted mass testing at only a handful of institutions where infections have been found, according to state data. In one of those facilities, the California Institution for Men in Chino, nearly 875 people have tested positive and 13 inmates have died.

Instead, California has employed surveillance testing, which involves testing a limited number of inmates at each state prison regardless of the known infection rate.

That method, Mr. Kelso said, had led officials to conclude that the vast majority of its prisons are free of the virus.

“We’re not 100 percent confident because we’re not testing everyone,” he said. “As we learn every single day from what we’re doing, we may suddenly decide, ‘No, we actually have to test all of them.’ We’re not at that point yet.”

In interviews, California prison inmates say prison staff have sometimes refused to test them, even after they complained about symptoms similar to the coronavirus. Several prisoners said they had been too weak to move for weeks at a time, but were never permitted to see a nurse and had never been tested.

“I had chest pains. I couldn’t breathe,” said Althea Housley, 43, an inmate at Folsom State Prison, where no inmates have tested positive, according to state data. “They told us it was the flu going around, but I ain’t never had a flu like that.”

Mr. Kelso did not dispute the prisoners’ accounts.

In Texas, mass testing has found that nearly 8,000 inmates and guards have been infected. Sixty-two people have died, including some who had not exhibited symptoms.

Dr. Murray, the physician who oversees much of Texas’ prison health care system, said the disparate approaches taken by prison authorities might actually be beneficial as officials compare notes.

“I’m glad we’ve got 50 states and everyone is trying to do something a little different — whether that’s by intent or not — because it’s really the only basis that we’re going to have for comparison later on,” he said.

But Baleegh Brown, 31, an inmate at a California prison, said he was displeased about being part of what he considered a science experiment. His prison has had more than 170 infections.

He said that he and his cellmate are confined to a 6-by-9-foot space for about 22 hours each day as the prison tries to prevent the virus from spreading further. Mr. Brown said he had a weakened immune system after a case of non-Hodgkin’s lymphoma, making him particularly vulnerable to illness.

“We need more testing here so everyone knows for sure,” he said. “And for me, my body has been compromised, so I don’t know how it is going to react. That makes all you don’t know even scarier.”