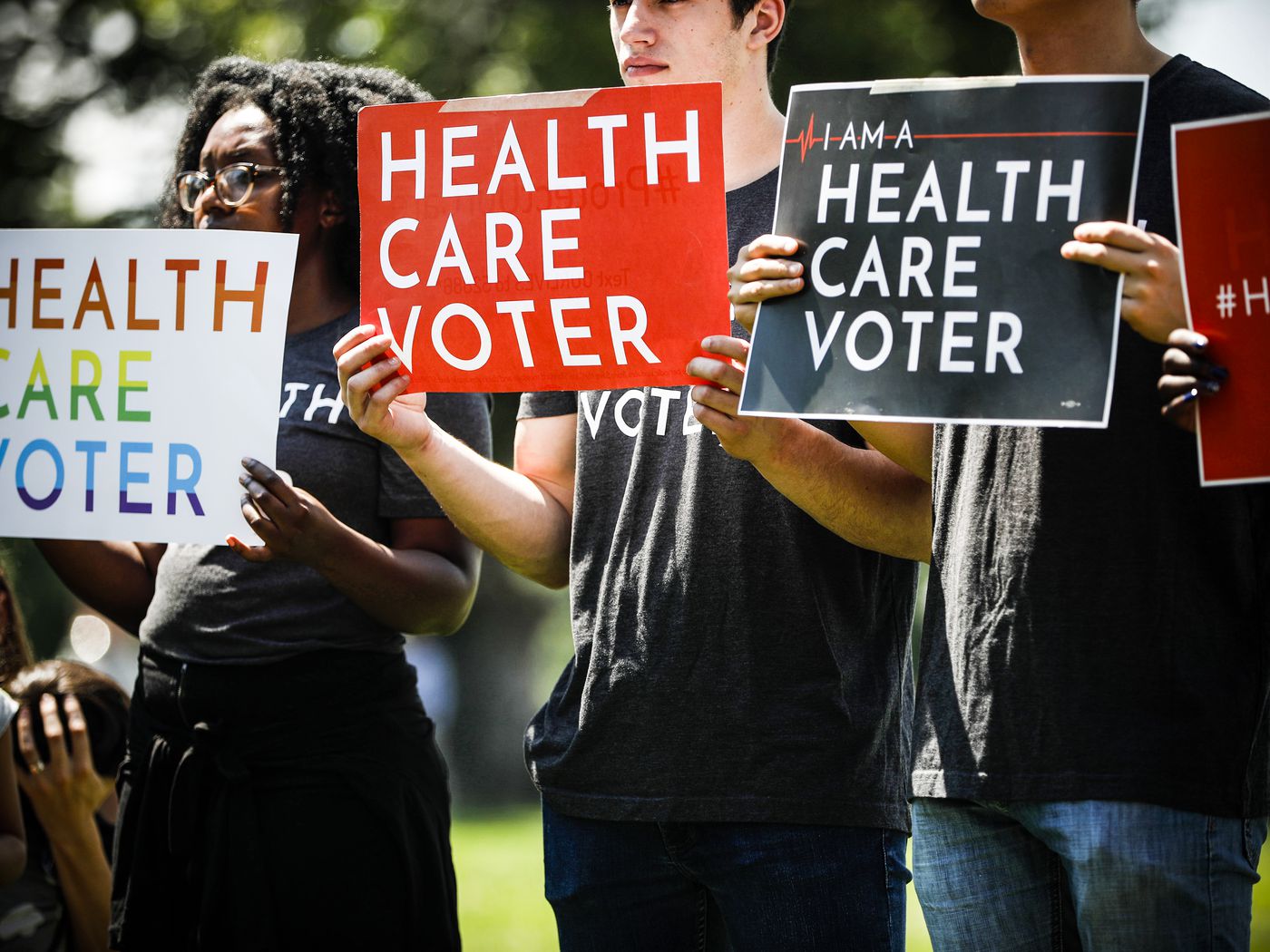 “Of course I will always protect those with preexisting conditions. Always.”

“What I look forward to working on is a plan that protects people with preexisting conditions.”

Sound familiar? Just like President Trump, these Republican senators say they support coverage guarantees for patients with preexisting health conditions. And just like Trump, their records show the opposite.

The president’s doublespeak — voicing support for these protections while asking the Supreme Court to strike them down — is spreading into some battleground Senate races this year.

It’s a classic case of buyer beware: Look under the hood of what Daines, Gardner and McSally are selling, and you’ll find a car without an engine.

Republicans for a decade have tried to repeal the Affordable Care Act, President Barack Obama’s signature health-care legislation. The Supreme Court has upheld the law twice in the face of challenges from conservative groups. As coronavirus cases reached a new high in the United States, the Trump administration filed a legal brief on June 25 asking the Supreme Court to strike down the entire law, joining with a group of GOP state attorneys general who argue that the ACA is unconstitutional.

Before the ACA, insurance companies could factor in a person’s health status while setting premiums, a practice that sometimes made coverage unaffordable or unavailable for those in need of expensive treatment or facing a serious illness such as cancer.

The ACA PROHIBITED THIS PRACTICE through two provisions: “guaranteed issue,” which means insurance companies must sell insurance to anyone who wants it, and “community rating,” which means people in the same age group and geographic area who buy similar insurance pay similar prices. The changes made insurance affordable for people with serious diseases or even those with minor health problems, who also could have been denied coverage before the law’s passage.

Now, about 20 million people covered through the ACA could lose their health insurance if the Supreme Court strikes down the law, among many other consequences bearing directly on the U.S. response to the coronavirus pandemic.

In addition to the coverage guarantee, the ACA established online health insurance marketplaces and subsidies for participating buyers. The law also directs billions of dollars a year in federal funding to states that have chosen to expand their Medicaid programs under the Obamacare law. Millions of Americans have gained coverage through those provisions.

We asked the Daines, Gardner and McSally campaigns whether the senators support or oppose the GOP lawsuit at the Supreme Court and how they would address affordability issues for patients with preexisting conditions if the ACA falls. None of their campaigns responded to our questions.

Daines voted to repeal the ACA in 2013 and has supported efforts to repeal and replace the law more recently during the Trump administration.

Regarding the GOP lawsuit, a Daines spokesperson was quoted in the Billings Gazette saying the senator “supports whatever mechanism will protect Montanans from this failed law, lower health care costs, protect those with preexisting conditions and expand access to health care for Montanans.”

“What I look forward to working on is a plan that protects people with preexisting conditions.” (Gardner)

Gardner has been voting to repeal, defund or replace the ACA since 2011, the year after its passage. This year, his campaign website says nothing about the law, but his official Senate website says, “Fixing our healthcare system will require repealing the Affordable Care Act and replacing it with patient-centered solutions, which empower Americans and their doctors.”

Asked by the Hill whether he supported the GOP lawsuit, Gardner said: “That’s the court’s decision. If the Democrats want to stand for an unconstitutional law, I guess that’s their choice.” In an interview with Colorado Public Radio, Gardner evaded the question six times in a row.

“Of course I will always protect those with preexisting conditions. Always.” (McSally)

In 2015, McSally voted to repeal the ACA when she served in the House. In 2017, she voted to replace the ACA with the American Health Care Act, which would have allowed insurers to charge higher premiums to patients with complicated medical histories.

McSally, now in the Senate, has declined to comment on the GOP lawsuit pending before the Supreme Court. When asked by PolitiFact, “the campaign didn’t specifically answer, but pointed to her general disapproval of the ACA.”

WHAT HAPPENS IF  THE GOP LAWSUIT SUCCEEDS?

Trump told The Washington Post days before his inauguration in 2017 that he was nearly done with his plan to replace the ACA. Three and a half years later, no replacement plan has emerged from the administration and Republicans in Congress hardly agree on what it would look like — or how to preserve the protections for preexisting health conditions.

Sen. Thom Tillis (R-N.C.), who is also running for reelection this year, has introduced a 24-page bill called the Protect Act that includes language guaranteeing coverage for preexisting conditions. Daines signed on as a co-sponsor on June 24, the day before the Justice Department filed its brief in the Supreme Court. McSally signed on in April 2019. Gardner is not listed as a co-sponsor.

Experts say the Tillis proposal does not offer the same level of protection for preexisting conditions as the ACA, and they warn that millions of Americans could lose their health coverage if the ACA falls and the Protect Act is the only replacement.

“Insurers before the Affordable Care Act had multiple and redundant ways that they could avoid people who had preexisting conditions,” said Karen Pollitz, a senior fellow at the Kaiser Family Foundation. The Protect Act prevents some of those practices, but it “leaves enough other loopholes that it would make it very possible and likely for insurers to be able to avoid paying benefits for the conditions they most worry about,” she said.

Before the ACA, an insurance company could reject an application outright, say, after reviewing a patient’s medical history. The Protect Act has language barring that practice.

“The second thing they could do is, they could sell you coverage, but they could exclude your preexisting condition. ‘Oh, you have diabetes? I’m not going to pay for any of those benefits,’” Pollitz said. “The Tillis bill says you can’t do that, so that’s good.”

In the days before the ACA, insurers were allowed to charge higher premiums based on a patient’s health status. To prevent this, the Protect Act takes language from the Health Insurance Portability and Accountability Act (HIPAA), rather than the newer ACA.

“The Protect Act inserts old HIPAA nondiscrimination language that prevents employers from varying worker premium contributions based on health status,” Pollitz said. “But the Protect Act also includes the old rule of construction that says nothing limits what the insurance company can charge the employer or individual.”

Pollitz said the “community rating” language in the ACA provides clearer protections in this area. The Protect Act says “nothing … shall be construed to restrict the amount that an employer or individual may be charged for coverage under a group health plan.”

“The bill would reinstate three protections at risk in the Texas case — prohibiting insurers from denying applicants based on pre-existing conditions, charging higher premiums due to a person’s health status, and excluding pre-existing conditions from coverage,” Sarah Lueck, a senior policy analyst at the left-leaning Center on Budget and Policy Priorities, wrote in an analysis.

“But it would leave many others on the cutting room floor,” she wrote, because insurers would be able to exclude coverage of benefits such as maternity care, mental health and substance-use treatment; set annual and lifetime limits on insurance payouts; and charge older patients more than younger patients at greater levels than the ACA allows, among other changes.

It’s important to keep in mind that the Protect Act would not replace other parts of Obamacare, such as the online marketplaces and subsidies. Neither would it continue the ACA’s Medicaid expansion, which 37 states and D.C. have now adopted. That includes Arizona, Colorado and Montana.

Voters deserve straight answers when their health care is on the line, especially in the middle of a deadly pandemic.

Daines, Gardner and McSally have voted to end the Affordable Care Act. People with preexisting conditions would have been left exposed because of those votes; insurers could have denied coverage or jacked up prices for sick patients.

The three senators’ comments about the GOP lawsuit are woefully vague, but they can all be interpreted as tacit support. Asked about the case, a Daines spokesperson said “whatever mechanism” to get rid of the ACA would do. McSally’s campaign “didn’t specifically answer, but pointed to her general disapproval of the ACA.” Gardner avoided the question six times in one interview, but in another, he said: “That’s the court’s decision. If the Democrats want to stand for an unconstitutional law, I guess that’s their choice.”

Four Pinocchios all around.