Shapes of Recovery: When Will the Global Economy Bounce Back? 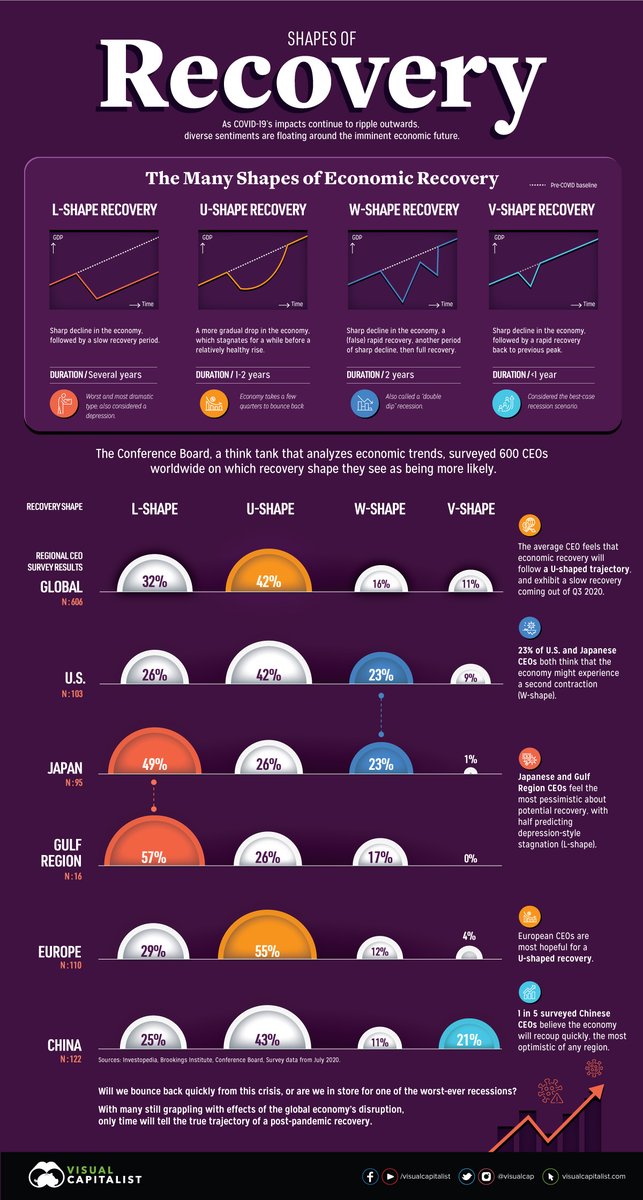 The Shape of Economic Recovery, According to CEOs

Is the glass half full, or half empty?

Whenever the economy is put through the ringer, levels of optimism and pessimism about its potential recovery can vary greatly. The current state mid-pandemic is no exception.

This graphic first details the various shapes that economic recovery can take, and what they mean. We then dive into which of the four scenarios are perceived the most likely to occur, based on predictions made by CEOs from around the world.

The ABCs of Economic Recovery

Economic recovery comes in four distinct shapes—L, U, W, and V. Here’s what each of these are characterized by, and how long they typically last.

Another scenario not covered here is the Z-shape, defined by a boom after pent-up demand. However, it doesn’t quite make the cut for the present pandemic situation, as it’s considered even more optimistic than a V-shaped recovery.

Depending on who you ask, the sentiments about a post-pandemic recovery differ greatly. So which of these potential scenarios are we really dealing with?

How CEOs Think The Economy Could Recover

The think tank The Conference Board surveyed over 600 CEOs worldwide, to uncover how they feel about the likelihood of each recovery shape playing out in the near future.

The average CEO felt that economic recovery will follow a U-shaped trajectory (42%), eventually exhibiting a slow recovery coming out of Q3 of 2020—a moderately optimistic view.

However, geography seems to play a part in these CEO estimates of how rapidly things might revert back to “normal”. Over half of European CEOs (55%) project a U-shaped recovery, which is significantly higher than the global average. This could be because recent COVID-19 hotspots have mostly shifted to other areas outside of the continent, such as the U.S., India, and Brazil.

Here’s how responses vary by region:

In the U.S. and Japan, 23% of CEOs expect a second contraction to occur, meaning that economic activity could undergo a W-shape recovery. Both countries have experienced quite the hit, but there are stark differences in their resultant unemployment rates—15% at its peak in the U.S., but a mere 2.6% in Japan.

In China, 21% of CEOs—or one in five—anticipate a quick, V-shaped recovery. This is the most optimistic outlook of any region, and with good reason. Although economic growth contracted by 6.8% in the first quarter, China has bounced back to a 3.2% growth rate in the second quarter.

Finally, Gulf Region CEOs feel the most pessimistic about potential economic recovery. In the face of an oil shock, 57% predict the economy will see an L-shaped recovery that could result in depression-style stagnation in years to come.

The Economic Recovery, According to Risk Analysts

At the end of the day, CEO opinions are all over the map on the potential shape of the economic recovery—and this variance likely stems from geography, cultural biases, and of course the status of their own individual countries and industries.

Despite this, portions of all cohorts saw some possibility of an extended and drawn-out recovery. Earlier in the year, risk analysts surveyed by the World Economic Forum had similar thoughts, projecting a prolonged recession as the top risk of the post-COVID fallout.

It remains to be seen whether this will ultimately indeed be the trajectory we’re in store for.