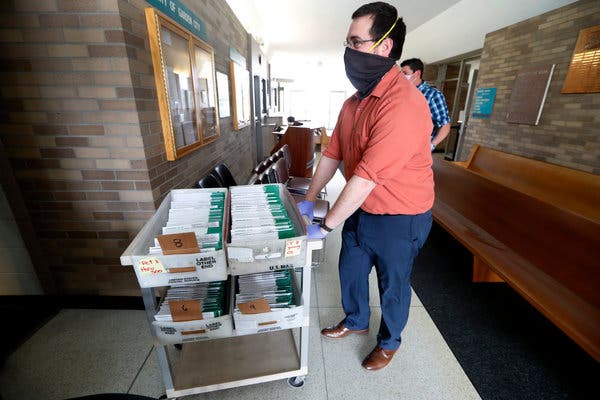 Despite the president’s opposition, states are increasingly reducing barriers to what many see as the safest way to vote amid the pandemic.

By threatening online on Wednesday to withhold federal grants to Michigan and Nevada if those states send absentee ballots or applications to voters, President Trump has taken his latest stand against what is increasingly viewed as a necessary option for voting amid a pandemic.

What he hasn’t done is stop anyone from getting an absentee ballot.

In the face of a pandemic, what was already limited opposition to letting voters mail in their ballots has withered. Eleven of the 16 states that limit who can vote absentee have eased their election rules this spring to let anyone cast an absentee ballot in upcoming primary elections — and in some cases, in November as well. Another state, Texas, is fighting a court order to do so.

Four of those 11 states are mailing ballot applications to registered voters, just as Michigan and Nevada are doing. And that doesn’t count 34 other states and the District of Columbia that already allow anyone to cast an absentee ballot, including five states in which voting by mail is the preferred method by law.

“Every once in a while you get the president of the United States popping up and screaming against vote-by-mail, but states and both political parties are organizing their people for it,” said Michael Waldman, the president of the Brennan Center for Justice at New York University. “It’s a bizarre cognitive dissonance.”

Many of the states that have relaxed their rules have done so only for pending primary elections, leaving the possibility that they could choose not to do so in November. But that is highly unlikely, said Daniel A. Smith, a University of Florida political scientist and expert on mail ballots.

“The horse is out of the barn whether it’s primaries or the general election,” he said. “The optics are such that states will be under enormous pressure to continue to allow mail voting in the fall.”

Even as the president has offered support for some groups of absentee voters like older Americans and military serving abroad — and even as he votes absentee himself — Mr. Trump has regularly warned with no factual basis that allowing widespread voting by mail was a recipe for election theft. “You get thousands and thousands of people sitting in somebody’s living room, signing ballots all over the place,” Mr. Trump said at a White House briefing last month.

Despite ballot stuffing scandals in the nation’s past, and an absentee vote scandal involving Republicans in North Carolina in 2018, nothing remotely comparable has been documented in modern American politics or linked to voting by mail.

Still, some conservative advocacy groups have embraced Mr. Trump’s view, even going to court to block the expansion of absentee balloting during the pandemic. Republican-controlled legislatures in Louisiana and Oklahoma also have bridled at making voting easier. More legal battles ahead of the November election seem certain.

But in many other states, governments controlled by each of the political camps have moved in the other direction.

In lawsuits and elsewhere, voting-rights advocates and Democrats have taken aim at state rules on voting that they see as discriminatory. In Texas, a federal court ruled this week that a state regulation granting blanket absentee-ballot privileges to voters over 65 — a not-uncommon exception nationally — discriminated against younger voters.

Elsewhere, lawsuits have sought to expand a common exception allowing absentee voting by people too sick to go to the polls. The goal is to cover voters who fear catching the coronavirus while in line at a polling place. A number of states have adopted that view, ruling that voters who reasonably fear exposure to the virus have a right to vote remotely.

Jocelyn Benson, the Democratic secretary of state in Michigan, said this week that the state would mail applications for absentee ballots to all 7.7 million registered voters for both the August primary and the November general election. The Legislature in deeply Republican South Carolina expanded absentee voting rights last week as a lawsuit pressing that cause lay before the state’s Supreme Court.

In West Virginia, the Republican secretary of state sent absentee ballot applications last month to each of the state’s 1.2 million registered voters; so far, nearly one in five has asked to vote absentee.

And in Kentucky, Republicans and Democrats agreed three weeks ago on an emergency plan that allows any voter to request an absentee ballot online and submit it by mail or at drop-off points for two weeks before the state’s June 23 primary. Michael G. Adams, the Republican secretary of state, told National Public Radio last week that he had been excoriated by his party for mailing postcards to voters explaining the new rules.

“The biggest challenge I have right now is making the concept of absentee voting less toxic for Republicans,” said Mr. Adams, who won election on a platform underscoring the threat of voter fraud.

Many political analysts say they find that odd. Until now, the decade-long crusade by Republicans against voter fraud has focused largely on requiring ID cards at polling places, supposedly to counter the distant possibility that an impersonator might make it into a voting booth. Studies show that fraud among absentee voters, while still rare, is more common — but that those voters have tended to be both older and white, a demographic that favors Republicans and Mr. Trump.

Mr. Trump said in March that Democrat-backed election proposals for expanded voting by mail would ensure that “you’d never have a Republican elected in this country again.” Indeed, many Republicans and Democrats alike believe that expanding mail voting would increase Democratic turnout.

Their reasoning is that many more absentee ballots have traditionally been cast by wealthier and more educated voters and expanding voting by mail would add more votes by the low-income and minority voters who tend to lean Democratic and have a harder time getting to polls on Election Day.

But both academic studies and changing demographics throw that into question. Under Mr. Trump, the Republican base has shifted greatly toward whites with less education, while wealthier suburbanites have become increasingly Democratic. Studies in states that use voting by mail indicate it does not favor either party.

And in any case, mail voting is increasingly the norm everywhere: In 2016, nearly one in four voters cast absentee or mail ballots, twice the share just 16 years ago, in 2004.

Mr. McDonald and a number of other experts argue that the greatest threat posed by a shift to voting by mail has nothing to do with fraud. Rather, they say, it is the very real prospect that a tsunami of mail votes could overwhelm both postal workers and election officials, creating a snarl in tallying and certifying votes that would allow a candidate to claim that late-counted votes were fraudulent.

Mr. Trump’s unfounded assertions that mail balloting in Michigan and Nevada encourage fraud suggest that he could be laying the ground for such an scenario, said Richard Hasen, an election law expert at the University of California, Irvine.

“I think he’s trying to undermine confidence in elections,” Mr. Hasen said, citing Mr. Trump’s claim in 2018 that close races for governor and the United States Senate were “massively infected” by fraud until Republican candidates, Ron DeSantis and Rick Scott, prevailed. “Maybe he’s not being conscious about what he’s doing. But he’s acting as if he has a plan.”