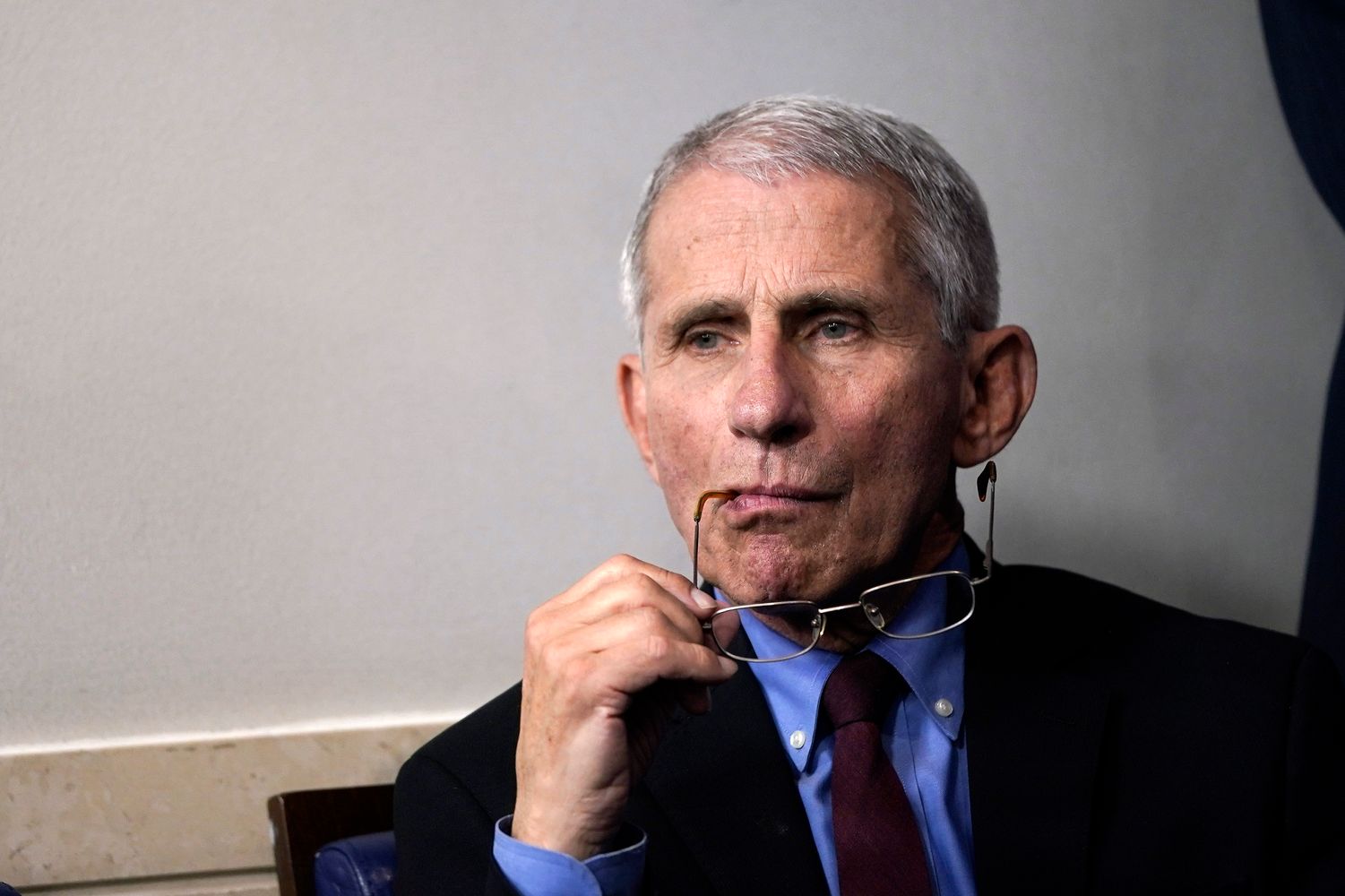 The coronavirus is still killing as many as 1,000 Americans per day — but the Trump administration isn’t saying much about it.

It’s been more than a month since the White House halted its daily coronavirus task force briefings. Top officials like infectious disease expert Anthony Fauci have largely disappeared from national television — with Fauci making just four cable TV appearances in May after being a near fixture on Sunday shows across March and April — and are frequently restricted from testifying before Congress. Meanwhile, President Donald Trump is preparing to resume his campaign rallies after a three-month hiatus, an attempted signal to voters that normalcy is returning ahead of November’s election, and that he’s all but put the pandemic behind him.

“We’ve made every decision correctly,” Trump claimed in remarks in the Rose Garden Friday morning. “We may have some embers or some ashes or we may have some flames coming, but we’ll put them out. We’ll stomp them out.”

Inside the White House, top advisers like Jared Kushner privately assured colleagues last month that the outbreak was well in hand — citing data on declines in community spread — and that the long-feared “second wave” may have even been averted, according to three current and former officials.

However, new data from states like Florida and mass protests across the country are renewing concerns about the virus’s spread. Texas, for instance, has reported two straight days of record-breaking coronavirus hospitalizations — highs that come shortly after the state kicked off the third stage of its reopening plan.

Those officials also acknowledge that the Covid-19 task force has scaled back its once-daily internal meetings — the task force now meets twice per week — but insist that the pandemic response remains a priority. One official with direct knowledge of the administration’s strategy cited efforts to scale up testing, accelerate the development of treatments and vaccines and perform other behind-the-scenes work to get ready for a potential fall surge.

“We’re delivering the supplies and resources that states asked for,” said the official. “This doesn’t need to be the public ‘coronavirus show’ every day anymore.”

“You can’t win,” said a senior administration official. “Some people complained for weeks that ‘we don’t want so much White House involvement,’ and that ‘the President should stop doing daily briefings,’ and then they turn around and complain that there aren’t enough or as many briefings.”

But the White House’s apparent eagerness to change the subject comes as new coronavirus clusters — centered around meatpacking plants, prisons and other facilities — drive spikes in disparate states like Utah and Arkansas. Meanwhile, states and major cities are lifting lockdowns and reopening their economies, prompting public health experts to fret that additional outbreaks are imminent. And several Democratic governors also have defied their own states’ social distancing restrictions to join mass protests over police brutality, where hundreds of thousands of Americans have spilled into the streets, further raising public health risks.

The fear is that all the mixed signals will only confuse people, stoke public skepticism over the health threat and promote the belief the worst is over just as the outbreak enters a dangerous new phase.

“Cases are rising, including from cases in congregate settings,” said Luciana Borio, who led pandemic preparedness for the National Security Council between 2017 and 2019. “We still have a pandemic.”

Nine current and former administration officials, as well as outside experts, further detailed how the White House is steadily ramping down the urgency to fight a threat that continues to sicken more than 100,000 Americans per week and is spiking in more than 20 states.

For instance, the administration in recent days told state health officials that it planned to reorganize its pandemic response, with HHS and its agencies taking over the bulk of the day-to-day responsibilities from the Federal Emergency Management Agency.

“The acuity of the response is not what it was, so they’re trying to go back to a little more of a normal ongoing presence,” said Marcus Plescia, the chief medical officer of the Association of State and Territorial Health Officials.

The coronavirus task force, which used to send daily updates to state officials, has done so with less regularity over the last several weeks, Plescia said. And the CDC has restructured its daily conference calls with states, moving away from the practice of giving top-down briefings to encouraging state officials to offer updates on what they’re seeing in their parts of the country.

One current and one former FEMA official also said they’re keen to have HHS resume its leadership role in containing the coronavirus so FEMA can make contingencies for a summer of hurricanes, floods and other natural disasters.

“Given the likelihood that we will soon see both hurricanes and coronavirus, HHS should manage the ongoing pandemic response so FEMA can prepare for coming ‘coronacanes,’” Daniel Kaniewski, who served as the top deputy at FEMA through January, wrote last week. “But they need to act soon. Coronacanes are in the forecast.”

Meanwhile, officials in at least 19 states have recorded two-week trends of increasing coronavirus cases, including spikes of more than 200 percent in Arizona and more than 180 percent in Kentucky. Two months after the White House issued so-called gating criteria that it recommended states hit before resuming business and social activities, only a handful of states — like Connecticut, New Jersey, New York and South Dakota — currently meet all of those benchmarks, according to CovidExitStrategy.org.

Officials within Trump’s health department are strategizing over how to convey the current level of risk, given data that Americans have put off emergency care and other potential medical needs, fearful of contracting Covid-19. “Our message now is that people should start returning to their health care providers to get the screenings, vaccines, care, or emergency services that they need,” Laura Trueman, the HHS official in charge of external affairs, wrote in an office-wide email to colleagues and shared with external groups on June 3, which was obtained by POLITICO.

Dan Abel, a longtime Coast Guard vice admiral, also has been installed at HHS with a small team, where he’s coordinating daily Covid-19 calls with HHS Secretary Alex Azar and the department’s division leaders, according to four officials with knowledge of the calls — an arrangement that’s raised some questions.

“Why is a Coast Guard admiral leading meetings between the HHS secretary and his senior staff?” asked one senior official, suggesting it created an unnecessary layer of management.

Meanwhile, the department is steadily turning back to its many pre-Covid-19 priorities. At the Food and Drug Administration, officials are returning to hot-button issues like tobacco and CBD regulations. Some staff in the health department’s emergency response arm are pivoting away from Covid-19 and back toward natural disasters as hurricane season begins.

At the same time, the Centers for Disease Control — traditionally the beating heart of the nation’s infectious disease response — remains largely demoralized and often sidelined in fighting what CDC director Robert Redfield last week acknowledged as the nation’s biggest health challenge in more than a century, and one he said is “moving through our social consciousness, our outward expression, and our grief.” That grim message has conflicted with Trump’s frequent vows of victory over the coronavirus.

“We were able to close our country, save millions of lives, open,” Trump said in Friday’s Rose Garden remarks. “And now the trajectory is great.”

“I fully recognize the anguish our Nation is experiencing & am deeply saddened by the many lives lost to COVID19,” Redfield tweeted just minutes later. “I call upon the American people to remain vigilant in protecting the vulnerable – protect your community, grandparents and loved ones from COVID-19.”

Redfield and other top officials also have spent the past week reckoning with the implications of widespread protests over police brutality, from meeting with staff to discuss longstanding concerns about systemic racism in health care to acknowledging the probability that those protests will spark new outbreaks.

HHS also on Monday sent members of Congress a fact sheet on its response to racial disparities in Covid-19 care — a much scrutinized issue in public health, with African Americans contracting and dying from the virus at much higher rates.

But on Capitol Hill, watchdogs say that fact sheets don’t cut it, and they’re frustrated by the lack of access to experts and insight into how the administration is handling a historic pandemic.

“Some are acting like the battle has been won when in reality it’s just beginning,” said a senior Democratic staffer. “The White House still won’t let task force members testify at hearings in June even though they have disappeared from TV and it’s not clear how often they are meeting.”

Fauci, meanwhile, has continued to issue a string of dire warnings in his lower-profile media appearances and at an industry conference on Tuesday.

“We have something that turned out to be my worst nightmare,” Fauci said in virtual remarks aired at a conference of the biotech industry’s Washington trade group, recounting how quickly the virus spread around the globe, outpacing Ebola and HIV. “And it isn’t over yet.”

The White House has maintained that chief of staff Mark Meadows has needed to clear officials like Fauci to testify, so they can stay focused on other priorities, and a spokesperson insisted that Trump has still prioritized the coronavirus fight even as the White House shifts toward focusing on revitalizing the economy.

Several officials have suggested that the task force’s lower profile has been helpful for the response, especially because the daily Covid-19 press briefings were often hijacked by Trump’s meandering remarks or the day’s other political news.

“In some ways, it actually has been easier to get Covid-related work done,” said one HHS staffer who’s helped support the Covid-19 response. “The task force briefings and the prep sessions for them took up a lot of principals’ time, and staff would sometimes have to crash on putting together materials for them.”

But the white-hot spotlight on the coronavirus also brought urgency and intensity, and the increasingly scattered nature of the current response could present new challenges if there’s an uptick in cases.

“This is when a one-government approach is needed more now than ever,” said Howard Koh, who served as President Barack Obama’s HHS assistant secretary for health. “Get all those people together in one room every day at the highest level and track outcomes and address all the questions and try to maximize coordination as much as possible.”