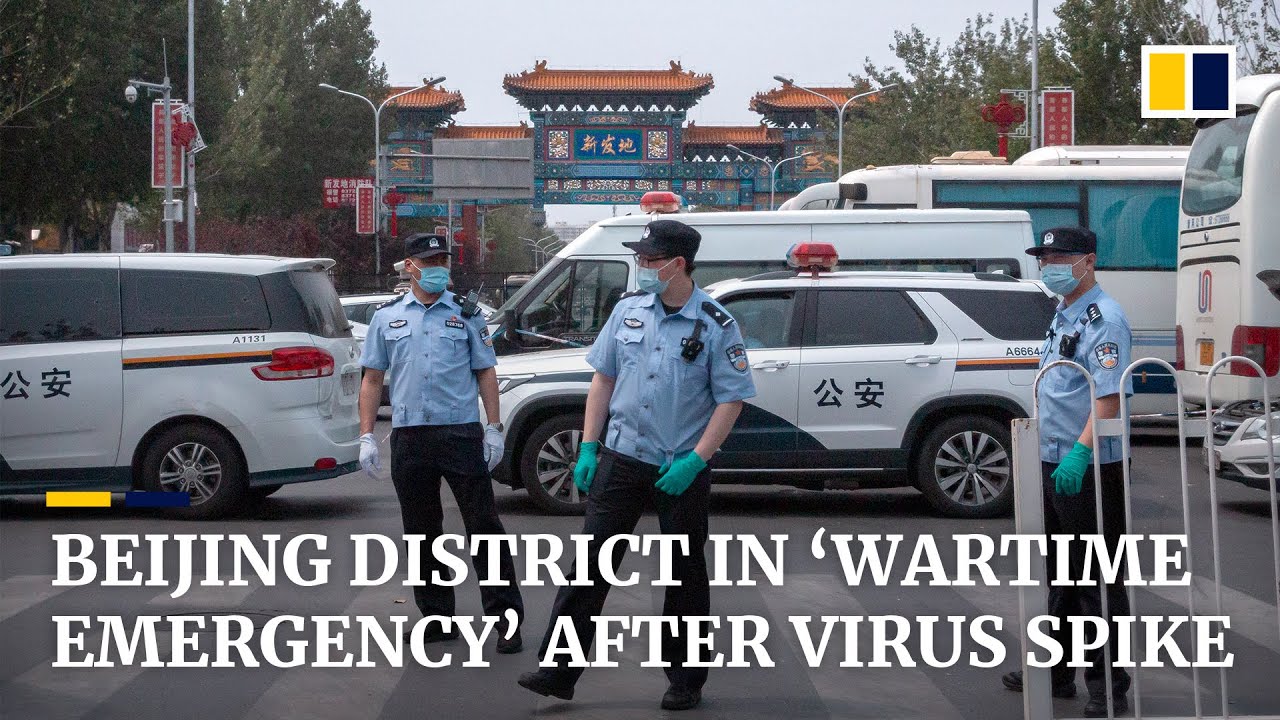 A district in central Beijing has gone into “wartime mode” after discovering a cluster of coronavirus cases around the biggest meat and vegetable market in the city, raising the prospect of a second wave of infections in the sensitive capital, the seat of the Chinese Communist Party.

The discovery of dozens of infections, both symptomatic and asymptomatic, underscores the perniciousness of the virus and its propensity to spread despite tight social controls.

“We would like to warn everyone not to drop their guard even for a second in epidemic prevention control; we must be prepared for a prolonged fight with the virus,” Xu Hejian, a spokesman for the Beijing municipal government, said at a news conference Saturday.

“We have to stay alert to the risks of imported cases and to the fact that epidemic control in our city is complicated and serious and will be here for a long time,” he said.

Authorities are particularly alert to cases around markets because that is how the coronavirus spread: It emanated from the Huanan food market in the city of Wuhan, across China and soon across the entire globe.

The initial outbreak was linked to exotic wildlife being sold at the Huanan market, but there was no evidence of any such trade at the Xinfadi market in Fengtai district, in the southwest of Beijing.

A man who had visited the Xinfadi market June 3 to buy meat and seafood tested positive for the coronavirus, Beijing’s Center for Disease Control and Prevention reported Thursday.

Then on Friday, it announced that two quality control workers at the state-owned China Meat Food Research Center who had visited Xinfadi and five other markets in the city to check on standards had also tested positive.

That prompted a frenzy of testing. By the end of Friday, Beijing authorities had swabbed 1,940 workers in major supermarkets and other food markets in the capital, and collected 5,424 environmental samples.

The tests revealed another four symptomatic cases: three were people who worked at the Xinfadi market’s seafood section and another was a customer who had visited the market. None of them had traveled outside Beijing, signaling that the cases had all been transmitted within the city.

They also uncovered 45 asymptomatic cases in people associated with the market and one linked to another market in neighboring Haidian district. They also found coronavirus on 40 of the environmental samples, including on a chopping board used for imported salmon.

The findings prompted swift actions to control any spread in the capital, where life has been inching back to almost normal.

Xinfadi was shut down immediately and the other five markets visited by the meat inspectors were ordered to close, either completely or partially.

Nine kindergartens and elementary schools around Xinfadi were ordered to close, and apartment complexes near the market were sealed off with movement severely restricted.

After a few days of a trial reopening, the National Center for the Performing Arts stopped allowing visitors Saturday, and all sports events in the city were prohibited. Beijing banned tourist groups from other provinces and regions.

But in a worrying development, the northeastern province of Liaoning on Saturday reported two asymptomatic cases in people who are close contacts of those infected in Beijing.

Experts said the findings underlined the difficulties in keeping domestically transmitted cases at or close to zero.

“We should have a realistic understanding of what it means for China to keep the status quo of almost zero domestic cases for a long time to come,” said Zhang Wenhong, a top infectious-disease expert in Shanghai who has a kind of celebrity status in China. “That doesn’t mean absolutely no new cases,” he wrote late Friday on Weibo, China’s answer to Twitter, after reports began emerging of new cases in Beijing.

“There is no need to go ­overboard over this so much as to halt the restoration of our economy and people’s livelihoods,” Zhang wrote. “As long as each and every one of us do our jobs well, and stay aware of personal hygiene and protection in our daily lives, we will be able to keep ourselves safe and keep our cities free from a second wave of infections and virus spread.”

When the virus began spreading in Wuhan in January, China introduced lockdown measures, considered draconian at the time but since widely replicated even in democratic parts of the world, to control the spread of the virus.

But the controls were particularly stringent in Beijing, home to the Communist Party leaders and also the site of the annual National People’s Congress, the most important event on China’s political calendar.

The Congress, which attracts thousands of delegates from around the country to gather in Beijing’s Great Hall of the People, was due to be held in early March but was delayed until late May because of the virus.

Even after Wuhan started to open, controls were kept in place in the capital to ensure the virus would not spread ahead of the political conclave. These include restrictions on people arriving into Beijing from elsewhere in China, while only Chinese citizens are allowed to enter the country from abroad, although a few exceptions have been granted to business people who are residents of China wanting to return.

All arrivals from overseas are tested for the virus and put into isolation in hotels. A handful of cases are found most days, usually Chinese people returning from hot spots like the United States or Britain.

Those controls have started to ease now that the meeting has passed, but the emergence of these new cases could prompt authorities to reconsider that.