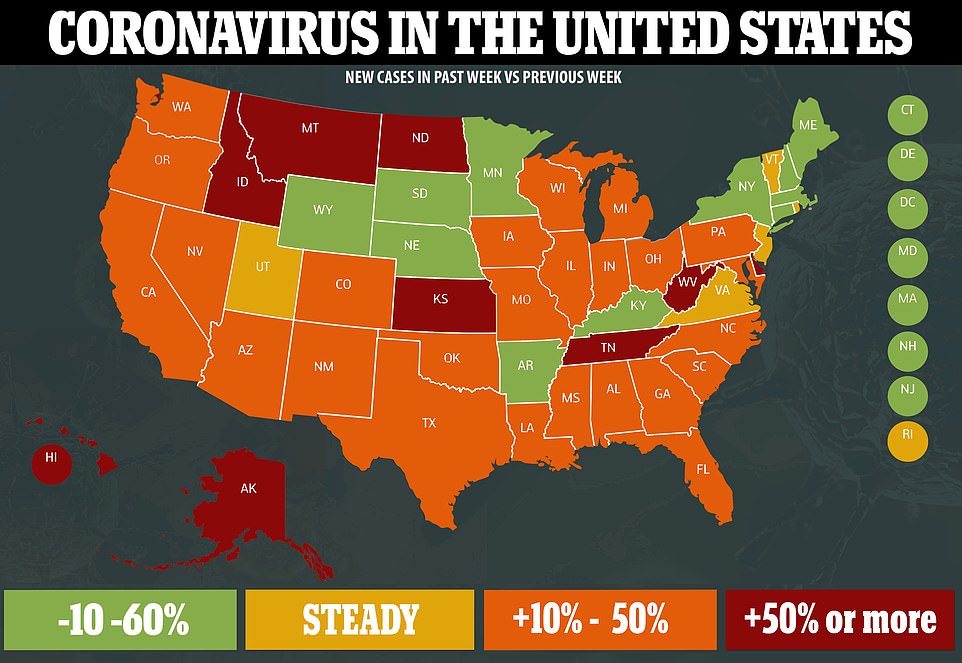 It was a week of unhappy milestones in the nation’s battle with the coronavirus. On Thursday, the US crossed the threshold of 4M confirmed COVID cases, just 15 days after it hit the 3M cases mark. That’s three times as fast as it took to go from 2M to 3M cases, with daily new case counts now hovering near 70,000.

As the virus proliferates across the country, California has now overtaken New York as the epicenter of the outbreak, with more than 422,000 total cases reported since the beginning of the pandemic, versus New York’s 413,000.

Of greater concern, the daily US death toll from COVID stayed stubbornly above 1,000 for most of the week, the highest it’s been since late May. More Americans are currently hospitalized with COVID than at any time since the middle of April, with the Gulf Coast states showing some of the highest per-capita hospitalization rates in the country. For good reason, Secretary of Health and Human Services (HHS) Alex Azar officially renewed the Trump administration’s declaration of a public health emergency for another 90 days, clearing the way for the nation’s hospitals to receive more emergency financial assistance in battling the virus, and for continued relaxation of regulations that have allowed them to provide care virtually, and in non-traditional settings.

Meanwhile, as part of its Operation Warp Speed initiative to accelerate the development of a COVID vaccine, the Trump administration inked a $1.95B deal with pharmaceutical firm Pfizer and a German biotech company, BioNTech, to purchase 100M doses of the vaccine those companies are developing, with an option to buy an additional 500M doses. That’s in addition to contracts already in place to purchase 100M doses of a vaccine from Novavax, and 300M doses from AstraZeneca.

Americans would have free access to the Pfizer vaccine under the new arrangement, with the government subsidizing the entire cost of each dose, estimated to be about $19.50. Similar deals struck by the British government with AstraZeneca and GlaxoSmithKline carry a much lower per dose price tag—between $4 and $10—raising concerns of “profiteering” by pharmaceutical companies in the US vaccine hunt.

The forward purchasing of millions of doses, coupled with rapid progress on vaccine development (at least 25 of the 150 potential vaccines being developed are already in human trials), raises hopes that help is on the way in our battle with the virus. On Friday, however, top White House science advisor Dr. Anthony Fauci said that he doesn’t expect a vaccine to be “widely available” to the American public until the second half of next year. Until then, our hand-to-hand combat with the virus—using non-pharmaceutical interventions such as mask wearing, social distancing, hand hygiene, testing, and contact tracing—must intensify, particularly in light of increasingly worrisome data on the spread and impact of the disease.