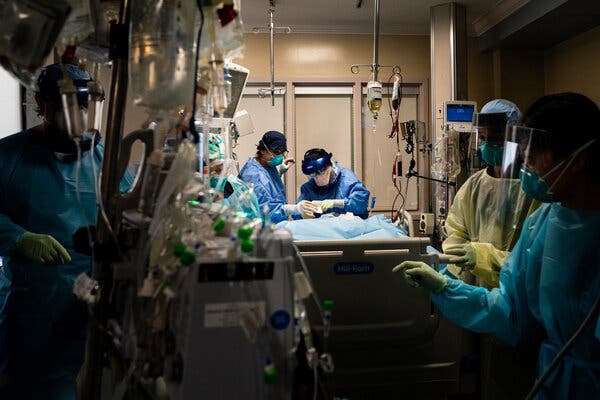 The Department of Health and Human Services told hospitals in April that reporting to the vendor, TeleTracking Technologies, was a “prerequisite to payment.”

The Trump administration tied billions of dollars in badly needed coronavirus medical funding this spring to hospitals’ cooperation with a private vendor collecting data for a new Covid-19 database that bypassed the Centers for Disease Control and Prevention.

The highly unusual demand, aimed at hospitals in coronavirus hot spots using funds passed by Congress with no preconditions, alarmed some hospital administrators and even some federal health officials.

The office of the health secretary, Alex M. Azar II, laid out the requirement in an April 21 email obtained by The New York Times that instructed hospitals to make a one-time report of their Covid-19 admissions and intensive care unit beds to TeleTracking Technologies, a company in Pittsburgh whose $10.2 million, five-month government contract has drawn scrutiny on Capitol Hill.

“Please be aware that submitting this data will inform the decision-making on targeted Relief Fund payments and is a prerequisite to payment,” the message read.

The financial condition, which has not been previously reported, applied to money from a $100 billion “coronavirus provider relief fund” established by Congress as part of the $2.2 trillion Coronavirus Aid, Relief and Economic Security Act, or CARES Act, signed by President Trump on March 27. Two days later, the administration instructed hospitals to make daily reports to the C.D.C., only to change course.

“Another data reporting ask,” a regional official in the health department informed colleagues in an email exchange obtained by The Times, adding: “It comes with $$ incentive. We really need a consolidated message on the reporting/data requests, this is past ridiculous.”

A colleague replied, “Another wrinkle. What a mess.”

The disclosure of the demand in April is the most striking example to surface of the department’s efforts to expand the role of private companies in health data collection, a practice that critics say infringes on what has long been a central mission of the C.D.C. Last month, the federal health department moved beyond financial incentives and abruptly ordered hospitals to send daily coronavirus reports to TeleTracking, not the C.D.C., raising concerns about transparency and reliability of the data.

Officials at the Department of Health and Human Services say that the moves were necessary to improve and streamline data collection in a crisis, and that the one-time reports collected in April by TeleTracking were not available from any other source.

“The national health system has not been challenged in this way in any time in recent history,” Caitlin Oakley, a department spokeswoman, said in a statement, adding that TeleTracking offered a “standardized national hospital capacity tracking system which provided more real-time, better informed data to make decisions from.”

“In the middle of a pandemic, the Trump administration is using funds meant to support hospitals as a tool to coerce them to use an unproven, untrusted and deeply flawed system that sidelines public health experts,” Senator Patty Murray of Washington, the ranking Democrat on the Senate Health Committee, said in a statement.

In a statement, TeleTracking said it has three decades of experience providing health care systems “with actionable data and unprecedented visibility to make better, faster decisions.”

Still, public health experts and hospital executives are puzzled as to why the health agency chose such a difficult time to employ an untested private vendor rather than improve the C.D.C.’s National Healthcare Safety Network, a decades-old disease tracking system that was deeply familiar to hospitals and state health departments.

The N.H.S.N., as it is known, had built up trust over decades of working with hospitals and state health departments. Administrators were reluctant to make the switch.

“People — especially in public health and clinical health — are very protective of their data, so that trust factor is certainly an issue,” said Patina Zarcone, the director of informatics for the Association of Public Health Laboratories. “The fear of having their data leaked or misused or used for a purpose that they weren’t aware of or agreed to — I think that’s the biggest rub.”

Ms. Oakley said the C.D.C.’s system was “not designed for use in a disaster response” and could not adapt quickly in a crisis. Allies of the C.D.C. say withholding taxpayer dollars from the CARES Act in lieu of cooperation was an inappropriate effort to push hospitals into a system they were reluctant to use.

“It’s an absolutely enormous lever,” said William Schaffner, an infectious disease expert at Vanderbilt University. “It’s a compulsion to oblige institutions to report to this TeleTracking system because they knew if it weren’t tied to money, it wouldn’t happen.”

The Pittsburgh company has no obvious ties to the Trump administration. Rather, the push appears to be part of a broader privatization. The Health and Human Services Department has also asked the Minnesota-based manufacturer 3M “to create, and continuously update, a nationwide clinical data set on Covid-19 treatment,” according to documents obtained by The Times.

The effort is separate from the TeleTracking data collection. Tim Post, a company spokesman, said that because 3M already operates hospital information systems, it is “uniquely positioned,” with the permission of its clients, to submit information to the health department to help officials study disease patterns and recommend treatment options.

Some experts say this kind of cooperation with the private sector is long overdue. But the push also appears to be driven at least in part by an intensifying rift between the C.D.C., based in Atlanta, and officials at the White House and Department of Health and Human Services, the parent agency of the disease control centers.

Dr. Deborah L. Birx, the White House coronavirus response coordinator, and Mark Meadows, the president’s chief of staff, have taken a dim view of the C.D.C. and believe its reporting systems were inadequate. In a recent interview, Michael Caputo, the spokesman for Mr. Azar, accused the C.D.C. of having “a tantrum.”

Accurate hospital data — including information about coronavirus caseloads, deaths, bed capacity and personal protective equipment — is essential to tracking the pandemic and guiding government decisions about how to distribute scarce resources, like ventilators and the drug remdesivir, the only approved treatment for hospitalized Covid-19 patients.

The health agency has set up a new database, H.H.S. Protect, to collect and analyze Covid-19 data from a range of sources. TeleTracking feeds hospital data to that system.

But the public rollout of H.H.S. Protect has been rocky. The nonpartisan Covid Tracking Project identified big disparities between hospital data reported by states and the federal government and deemed the federal data “unreliable.”

The tension dates to March, when the novel coronavirus was making its first surge in the United States

On March 29, Vice President Mike Pence, charged by Mr. Trump with overseeing the federal response, informed hospital administrators that the C.D.C. was setting up a “Covid-19 Module,” and asked them to file daily reports which, he said, were “necessary in monitoring the spread of severe Covid-19 illness and death as well as the impact to hospitals.”

But around that time, TeleTracking submitted a proposal for data collection to the Trump administration, through an initiative, ASPR Next, created to promote innovation. On April 10, TeleTracking was awarded its contract.

The health department’s spokeswoman said the intent was to complement the C.D.C., not compete with it. Like the C.D.C.’s network, TeleTracking’s system requires manual reporting on a daily basis. But in June, Ms. Murray demanded the administration provide more information about what she called a “multimillion-dollar contract” for a “duplicative health data system.”

Some hospital officials also objected to the change.

“We have been directing our hospitals to N.H.S.N.,” Jackie Gatz, a vice president of the Missouri Hospital Association, wrote to a regional health and human services official in an email obtained by The Times, “and now this email with a much greater carrot — CARES Act distributions — is routing them to TeleTracking.”

When the order was delivered, flaws had already emerged in the new system.

“H.H.S. has acknowledged long wait times for those calling for technical support, and indicated that TeleTracking recently added 100 staff to respond to call center requests,” the American Hospital Association wrote to its members in a “special bulletin” on April 23. “They also are directing hospitals to leave a message if they are unable to reach someone live.”

At the time, hospitals had the option of making their daily coronavirus reports to TeleTracking or the C.D.C. Few were using the new database.

One official at a major academic hospital, who spoke on the condition of anonymity for fear of angering officials in Washington, said the switch left her “unable to sleep at night.”

“Ethically, it felt like they had taken a very trusted institution in the C.D.C. and all of that trust built up with many public health people,” she said, then “moved it onto a politically and financially motivated portion of this response.”

Health and human services officials say the government now has a much more complete picture of hospital bed capacity, with more than 90 percent of hospitals reporting. But Dr. Janis M. Orlowski, the chief health officer for the Association of American Medical Colleges, who worked with Dr. Birx and the administration to bolster hospital reporting, said that she was “stunned” by the switch and that the increase in reporting came because of efforts by her group and others, not the TeleTracking system.

Dr. Orlowski said the data and maps now published on the administration’s H.H.S. Protect data hub are “just not as sophisticated as the C.D.C.”

The switch also generated pushback inside the C.D.C., where officials have refused to analyze and publish TeleTracking data, saying they could not be assured of its quality and had continuing questions about its accuracy, according to a senior federal health official.

Administration officials say the C.D.C. is working with a little-known office in the executive branch — the United States Digital Service — to build a “modernized automation process” in which data will continue to flow directly to the Department of Health and Human Services. But the project is in its infancy, one senior federal health official said.

Critics say that if the department believed the C.D.C.’s health network had problems, those should have been fixed.

“We have a public health system that depends upon communication from hospitals to state health departments to the C.D.C.,” said Dr. Schaffner, the Vanderbilt University infectious disease expert. “It’s very well established. Can it be improved? Of course. But to cut out the public health infrastructure and report to a private firm essential public health data is misguided in the extreme.”