Every hospital in America has been affected by the growing shortage of nursing talent as the pandemic persists. This week a health system chief operating officer shared her greatest concern about the future of the nursing workforce: “We’re under immense pressure to find any nurses we can to keep units and operating rooms open. But if I think about the long-term impact, what I am most worried about is losing our most experienced nurses en masse.”

The average age of a nurse is 52, and 19 percent of nurses are over 65. Health systems have been facing a wave of retirements of Baby Boomer nurses, and the stresses of the pandemic, both in the workplace and at home, have dramatically accelerated the rate of tenured nurses leaving the profession, taking their well-honed clinical acumen with them.

“We’re looking at ways to increase the nursing pipeline, but you can’t replace a nurse with decades of experience one-to-one with someone just out of school, and expect the same level of clinical management, particularly for complex patients,” our COO colleague shared.

In the near term, her system is looking at two sets of strategies to maintain the nursing “brain trust”.

First, they hope to retain tenured nurses with job flexibility: “We’re not just losing nurses to retirement, we’re losing them to Siemens and Aetna—not because they are excited about that work, but because they don’t want to work a 12-hour shift. We have to be better about creating part-time, flexible schedules.”

Second, they are piloting telenursing and decision-support solutions to provide guidance and a second set of eyes for new nurses. These tools have also helped in new nurse recruitment. We’d predict the workforce crisis will persist far beyond the pandemic, and require rethinking of training, process automation, and the boundaries of practice license. But in the near-term, retaining and upskilling the talent we have is essential to maintaining access and quality.

The workers who have stayed on at their jobs amid the Great Resignation are struggling to fill the gaps left by former colleagues, CNBC reported Nov. 2.

The effects of the Great Resignation continue to be felt by companies after a record high of 4.3 million workers quit their jobs in August alone. The workers who remained in their roles, though, are struggling with their new increased workload.

A report by the Society for Human Resource Management that surveyed 1,150 employed Americans in July as well as 220 executives illuminated some of the challenges of the workers who stayed.

It found that 52 percent of workers who stayed with their companies have taken on more responsibilities, with 30 percent of remaining employees stating they struggle to complete necessary tasks. A majority of workers are questioning whether their pay is high enough, and 27 percent feel less loyalty to their company.

This worker dissatisfaction opens up a vicious cycle, Johnny Taylor Jr., president and CEO of the Society for Human Resource Management, told CNBC.

“The employees who remain now say, ‘I’m working too hard, I don’t have balance in my life, etc.’ And so then they want to leave and thus a vicious cycle continues” Mr. Taylor told CNBC.

Thus, it’s more important now than ever for employers to exercise empathy and listen to what their employees are experiencing in the wake of workplace shifts.

“Invest in them today,” Alex Durand, a career transition and leadership coach, told CNBC. “Show them you care before they tell you they are leaving.” 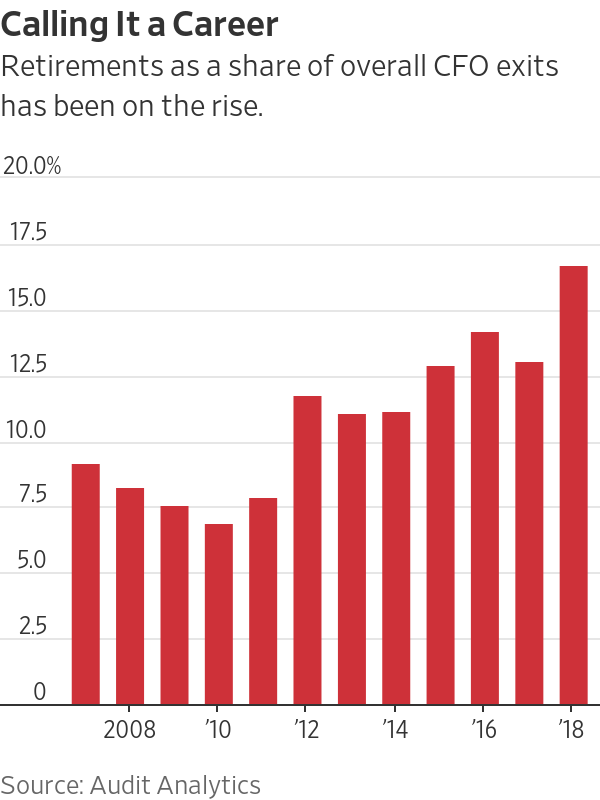 Market watchers say the surging stock-market could be prompting finance chiefs to hang up the abacus before a downturn hits.

Bill Rogers had climbed the corporate mountain, ascending to the finance chief role at CenterPoint Energy Inc. He had just guided the Houston-based utility through the $6 billion purchase of natural gas and electricity supplier Vectren Corp. And he was approaching an important milestone: his 60th birthday.

So, in March, Mr. Rogers retired. “The timing was right,” he said.

It is an increasingly familiar refrain. CFOs are retiring at the fastest pace in at least a decade—a generational changing of the guard that experts put down to factors including the increasing complexity of the role and the booming stock market.

One in six executives who left the CFO position at a U.S. public company in 2018 did so to retire, the highest share since at least 2007, according to an analysis of 12 years of regulatory filings by Audit Analytics for The Wall Street Journal.

Many CFOs leaving the role are simply reaching retirement age. Others point to new pressure from expanding job descriptions, which now often encompass oversight of human resources and information technology. Meanwhile, a rich array of advisory opportunities for seasoned executives may be tempting some into early retirement.

The market also plays a role: CFOs’ compensation often includes restricted equity grants, which in some cases can only be cashed out in full after retirement. A hot stock market has made that option more enticing. The S&P 500 stock index, which recouped losses suffered during the 2008 global financial crisis by 2013, has reached record highs this year.

Campbell Harvey, a professor at Duke University’s Fuqua School of Business, said the uptick in retirements could show that the executives overseeing American companies’ finances increasingly believe the long bull market will soon come to an end.

“It’s an intriguing market timing signal by people that are well able to assess the pulse and direction of the U.S. economy,” he said. “These executives are sitting on a pile of stock and it’s difficult to sell that stock as an insider, so when do you want to retire? Do you want to retire when the stock market is near an all-time high, or do you want to retire in the depths of the inevitable correction that might be a recession?”

A surge in deal activity has also been a factor. Last year was one of the busiest on record for mergers and acquisitions. Deals can trigger contract clauses that accelerate vesting requirements of restricted shares, giving CFOs an incentive to walk away, said Rhoda Longhenry, co-head of the financial officers practice at executive recruiter True Search.

The robust economy allowed Kenneth Pollak to retire from the CFO position at women’s apparel company Eileen Fisher Inc. in 2017 at the age of 66. “If the stock market didn’t come back, then I would say there was a good chance I would have worked a few more years,” he said.

CFOs are also tapping out because of escalating demands, recruiters said. CFOs once focused on regulatory compliance, accounting and reporting of financial results. Today, they are increasingly involved in setting strategy, finding and executing deals, and overseeing operations, technology, cybersecurity, talent management, human resources and risk.

Comparing the turnover rate for CFOs and CEOs provides some support for the idea that financial executives in particular are facing increased pressure at work. In 2009, the departure rates for CEOs and CFOs—for all reasons, not just retirement—were roughly the same, at 13.5% and 13.4% respectively, according to Audit Analytics. By 2018, the exit rate for CFOs had risen to 17.5%, compared with 15.2% for CEOs. 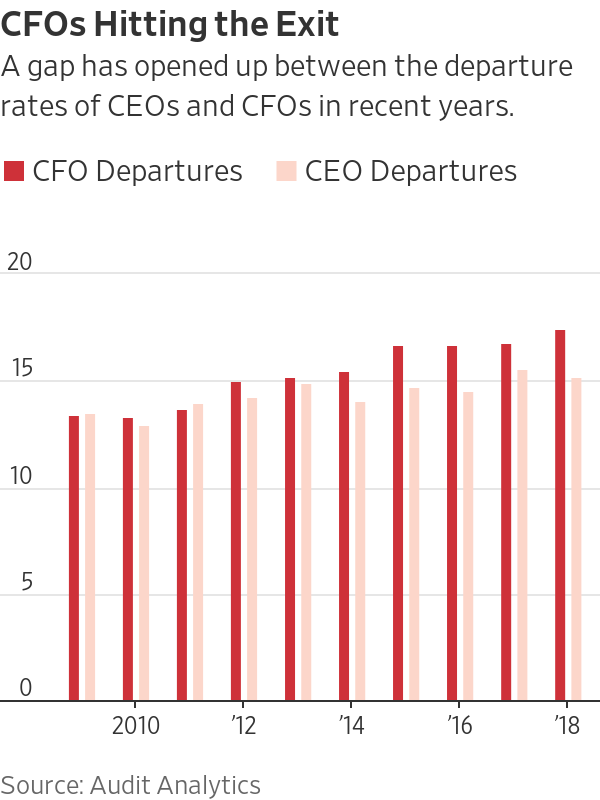 Neil Edwards said his once-high blood pressure has eased to a normal range since 2014, when he retired at 59 from his role as CFO of internet-access company United Online Inc. “In the early days I really looked forward to getting into the office,” he said. “The last 18 months were very hard work. I was tired at the end of it.”

Retiring executives are also presented with more options, as consulting and outsourcing has permeated into more fields, recruiters said.

“We don’t believe anybody at this level ever retires, they are looking for flexibility,” said Gail Meneley, co-founder of Shields Meneley Partners, a Chicago firm that helps executives find their next job.

Mr. Edwards saw retirement as a second act, not the final scene. He does some consulting. He also puts his skills to use as a volunteer, helping impoverished schools in Cambodia with their finances.

Once Mr. Pollak was satisfied with his nest egg, his next priority was keeping busy. In his first year of retirement from Eileen Fisher, he traveled to Europe with his wife and secured a seat on a company board.

Downshifting from his hard-charging schedule was still a challenge. “When I was doing the board work and consulting, I was busy,” he said. “But there were times when I woke up on a Monday morning and wondered what I was going to do with the week.”

For Mr. Rogers, the aim of retiring from CenterPoint before age 60 was to leave time for his postwork goals. Since retiring, he has walked the Camino de Santiago in Spain with a group from the University of St. Thomas in Houston, one of several organizations that Mr. Rogers advises.

“You really can’t be sure what your health is after age 70,” Mr. Rogers said. “I have other interests, I want to make sure I have some span of time to see what I might do with them.”

The Cincinnati-based Catholic health system aims to sell 51% of the equity in Ensemble netting $1.2 billion in cash proceeds, which will be reinvested in Bon Secours Mercy when the deal is completed following the standard regulatory approvals.

“Our bread and butter is not to be a revenue cycle management company, so we thought maybe it was time to spin it out as a private company,” said John Starcher, Bon Secours Mercy Health president and CEO, adding that Golden Gate has the capital and expertise to continue to build out Ensemble.

Founded in 2014, Ensemble has grown to 3,600 employees in 30 states that serve 27 health systems. Then-Mercy Health acquired Ensemble in 2016, when it worked with about eight health systems, and invested around $60 million.

At that time, Mercy was coming off a failed revenue cycle outsourcing venture and an attempt to bring it in-house as its cost to collect, point of service collections and other metrics were trending negatively, resulting in a $135 million shortfall in expected cash collections, Starcher said.

Ensemble has helped Mercy Bon Secours accrue about $400 million to its bottom line over a three-year period, he said.

“Our terrible numbers had righted in less than one year,” Starcher said.

More providers are outsourcing their scheduling, billing and collections services as patients shoulder more of their healthcare costs and bad debt levels grow. Hospitals and health systems are turning to specialists that claim to deliver on patient satisfaction goals, which are poised to have a greater impact on reimbursement rates. Outsourcing also allows providers to free up capital and mitigate compliance risks.

“There is a tremendous amount of pricing and rate pressure on health systems,” said Judson Ivy, founder and CEO of Ensemble, adding that consumerism is another driving force behind outsourcing revenue cycle management as consumers seek a better experience. “There is also a talent drain on the industry.”

Bon Secours Mercy Health also has an IT subsidiary that specializes in Epic installations and a call center venture that manages the patient journey, among others, Starcher said.

“We also have expertise as we look across the continuum in marketing, supply chain and HR, and we think this is a burgeoning opportunity,” he said.

But you can’t monetize a mediocre service, Starcher said, offering a word of caution. A subsidiary can’t be so tethered to a health system that it can’t be priced competitively with other standalone companies, he said.

“While many health systems talk about this a lot, it doesn’t mean that it has been done successfully,” Starcher said.

Over a four-month period following the merger, the health system reported $58.9 million in recurring operating income, which excludes restructuring and integration expenses, on operating revenue of $2.7 billion. With the $95.5 million of one-time costs, its operating income fell to negative $36.6 million. Those losses included an impairment charge on the now-defunct HealthSpan Partners’ investment in Summa and merger-related costs.

That compared to $72.9 million in recurring operating income on revenue of $2.69 billion over the same period the year prior. Operating income fell slightly to $68.2 million with $4.7 million of one-time expenses.