The former CEO of American Senior Communities, an Indianapolis-based skilled nursing and rehabilitation provider, was sentenced June 29 to nine and a half years in prison for his role in a fraud, kickback and money laundering conspiracy, according to the Department of Justice.

Federal agents began their investigation into James Burkhart three years ago. In September 2015, agents executed search warrants of his residence and ASC office. About a year later, Mr. Burkhart and three others — Daniel Benson, the former COO of American Senior Communities; Steven Ganote, an associate; and Joshua Burkhart, Mr. Burkhart’s younger brother — were indicted by a federal grand jury. All of the defendants, including Mr. Burkhart, had pleaded guilty to federal felony charges by January 2018.

Mr. Burkhart and his co-conspirators were accused of creating shell companies that would inflate vendors’ bills and submit them to ASC as if the shell companies were the real vendors. He also caused vendors or shell companies to submit false bills to ASC for fictitious services that were never provided, and, in some cases, demanded vendors pay him kickbacks in exchange for allowing them to service ASC’s large number of facilities.

In addition, Mr. Burkhart had vendors inflate their bills to ASC, which he would pay with money from Health & Hospital Corp. of Marion County, the public health department that operates several Indianapolis hospitals. The vendors would allegedly kick the overage back to Mr. Burkhart and his co-conspirators.

According to the DOJ, Mr. Burkhart and his co-conspirators funneled nearly $19.4 million to themselves through the scheme. The majority of the funds came from Health & Hospital Corp. of Marion County. 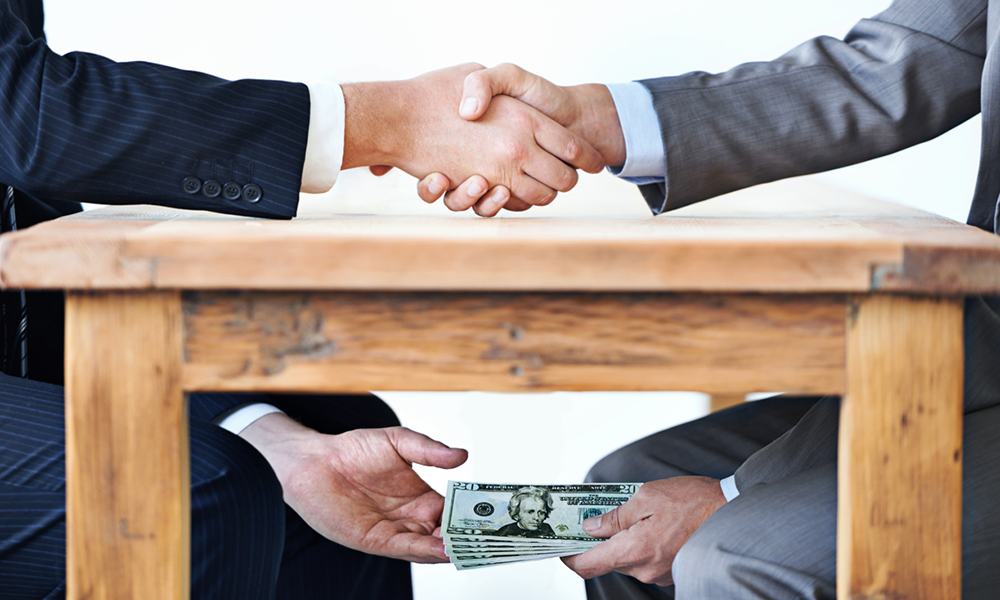 Federal prosecutors unsealed charges this week against nine new defendants for their alleged roles in a kickback scheme that resulted in the submission of more than $950 million in fraudulent claims, mostly to California’s worker compensation system, according to the Department of Justice.

The nine defendants were charged in relation to the government’s investigation into kickbacks physicians received for patient referrals for spinal surgeries performed at Pacific Hospital in Long Beach, Calif. They are among the dozens of physicians and other medical professionals allegedly involved in the scheme.

The other defendants recently charged in the scheme include the former CFO of Pacific Hospital’s physician management arm, George Hammer. He agreed to plead guilty to tax charges based on the fraudulent classification of illegal kickbacks in hospital-related corporate tax filings. Two chiropractors as well as two companies and an individual associated with one of the chiropractors were also charged for their alleged involvement in the scheme, according to the DOJ.

Michael Drobot, former owner and CEO of Pacific Hospital, ran the 15-year-long kickback scheme. He was sentenced to more than five years in prison in January.

The former CEO of Team Work Ready, a Houston-based physical therapy chain, was sentenced June 1 to more than 19 years in prison for his role in an $18 million healthcare fraud scheme, according to the Department of Justice.

According to federal prosecutors, Mr. Rose and his co-conspirators submitted $18.3 million in fraudulent claims for physical therapy services that were never provided through Mr. Rose’s 10 Team Work Ready clinics in Texas, Louisiana, Georgia, Tennessee and Alabama. The claims were submitted under the Federal Employees Compensation Act, which is administered by the Department of Labor’s Office of Workers’ Compensation Program.

In addition to the prison term, Mr. Rose was ordered to pay $14.5 million in restitution to the DOL’s Office of Workers’ Compensation Program. A 60-year-old Texas physician was sentenced Aug. 9 to 35 years in prison for orchestrating a $375 million healthcare fraud scheme, according to the Department of Justice.

Federal prosecutors said Jacques Roy, MD, and his cohorts used promises of cash, groceries and food stamps to recruit patients, including some of Dallas’ homeless, as part of the fraud scheme.

From January 2006 to November 2011, Dr. Roy’s office, Medistat Group Associates in DeSoto, Texas, handled more home healthcare visits than any physician’s office in the country. Dr. Roy allegedly certified or directed the certification of more than 11,000 individual patients from more than 500 home healthcare agencies for home health services during that time, according to the DOJ.

“A doctor cannot care for 11,000 patients at once,” Assistant U.S. Attorney P.J. Meitl said during the trial, according to The Dallas Morning News

In addition to his 35-year prison term, Dr. Roy was ordered to pay $268.15 million in restitution.

On May 24, 2016, a federal grand jury returned a 47-count indictment against Mr. Canupp, charging him with conspiracy, bribery, organization fraud, wire fraud and money laundering. The indictment was issued nearly one year after a state audit found Mr. Canupp had facilitated kickbacks from two Eastpointe contractors. The audit revealed Eastpointe paid two contractors more than $1 million for renovations from 2010 to 2013. Each time a check was received from Eastpointe, the contractor wrote a personal check to Mr. Canupp. The contractors paid the former CFO a total of $547,595.

Mr. Canupp pleaded guilty in March to conspiracy to commit federal program fraud, wire fraud and tax fraud, according to The Wilson Times.

A federal grand jury has returned indictments on 21 individuals allegedly involved in a massive kickback scheme through the defunct Forest Park Medical Center chain of luxury hospitals, which resulted in “well over half a billion dollars” in billed claims due to illegal bribes.

The 44-page indictment, unsealed Thursday, describes a vast, four-year conspiracy, fueled by $40 million in kickbacks funneled through a number of shell companies—consulting firms, commercial real estate firms, business services organizations—into the pockets of high-powered surgeons, some of whom have their faces on billboards throughout Dallas-Fort Worth.

The 21 suspects include two of the four physician founders of the hospital chain, including Dr. Richard Toussaint, the anesthesiologist who is awaiting sentencing on a separate fraud conviction; and Wade Barker, the bariatric surgeon who helped develop the idea for Forest Park. Other early adopters indicted in the scheme include Wilton ‘Mac’ Burt, a consultant who helped run the chain’s affiliated management company until he and his colleague, Alan Beauchamp, were bought out in 2015. Beauchamp was also indicted.

But the bribery scheme sailed far outside the doors of Forest Park’s grey and blue flagship at the corner of U.S. 75 and Interstate 635. Also indicted were prominent bariatric surgeons Drs. David Kim and William Nicholson as well as the minimally invasive spine surgeons Drs. Michael Rimlawi, Douglas Won, and Shawn Henry. Won, the DOJ alleges, was paid $7 million for his referrals. Rimlawi is accused of accepting $3.8 million. The feds argue that Kim and Nicholson, both of whom were investors in Forest Park, were paid $4.595 million and $3.8 million respectively. Reads the indictment: “The surgeons spent the vast majority of the bribe payments marketing their personal medical practices—which benefitted them financially—or on personal expenses such as cars, diamonds, and payments to family members.”

In all, the feds say Forest Park collected “in excess of two hundred million dollars in tainted and unlawful claims.” None of those named in the indictment have returned requests for comment. Sheryl Zapata, the chief development officer for the Texas Back Institute where Nicholson currently practices, said “TBI is not a part of this and we will not be commenting.”

“Medical providers who enrich themselves through bribes and kickbacks are not only perverting our critical health care system, but they are committing a serious crime,” read a statement from U.S. Attorney John Parker. “Massive, multi-faceted schemes such as this one, built on illegal financial relationships, drive up the cost of healthcare for everyone and must be stopped.”

Forest Park Medical Center was a chain of luxury hospitals that sprouted in Dallas, Fort Worth, Southlake, Frisco, and San Antonio. One in Austin was built but never opened, kneecapped due to nearly two dozen construction liens.

The model collapsed in on itself due to its reliance on high out-of-network charges that it would bill to insurance companies. The payers eventually balked, and the patient volumes dried up. The hospitals died one by one, each eventually entering bankruptcy and sold off to a health system. Because they were physician owned, they were barred by the Affordable Care Act from billing any public health insurance plan, such as Medicare, for fear of conflicts of interest regarding referrals. And despite this, it twice had to settle claims with the DOJ for paying kickbacks for Tricare patients and Department of Labor employees. The indictment alleges that this is exactly what happened: Beauchamp, Barker, and Kim, among others, “also attempted to refer patients with lower-reimbursing insurance coverage, namely Medicare and Medicaid beneficiaries, to other facilities in exchange for cash.”

The former CEO of two Alabama health clinics has been sentenced to 18 years in prison for his role in a fraud scheme, according to the Department of Justice.

According to the DOJ, 53-year-old Jonathan Dunning left his post as CEO of Birmingham (Ala.) Health Care and Central Alabama Comprehensive Health in Tuskegee in 2008. However, he continued to exercise control over the two nonprofit health clinics and diverted government funds meant for the clinics to his own for-profit companies, according to the DOJ.

Over a seven-year period, Mr. Dunning defrauded HHS, the Health Resources and Service Administration, the two clinics, a credit union and others out of more than $16 million, according to the government’s sentencing memorandum.

The owner of more than 30 Miami-area skilled nursing and assisted living facilities, a hospital administrator and a physician’s assistant were charged with conspiracy, obstruction, money laundering and healthcare fraud in connection with a $1 billion scheme involving numerous Miami-based providers, the United States Department of Justice announced.

Assistant Attorney General Leslie Caldwell of the Justice Department’s Criminal Division said in a statement that the charges represent the largest single criminal healthcare fraud case ever brought against individuals by the DOJ.

Philip Esformes, 47, Odette Barcha, 49, and Arnaldo Carmouze, 56, all of Miami-Dade County, Florida, were charged in an indictment claiming that Esformes operated a network of more than 30 skilled nursing homes and assisted living facilities known as The Esformes Network, which gave him access to thousands of Medicare and Medicaid beneficiaries.

According to evidence presented at trial, Mr. Nerey referred Medicare beneficiaries to two home healthcare companies in return for kickbacks. Some of the patients he referred did not qualify for home healthcare services. Mr. Nerey was involved in the kickback scheme from October 2014 to September 2015, according to the DOJ.

In addition to his prison term, Mr. Nerey was ordered to pay more than $2.3 million in restitution.

A federal grand jury returned a 47-count indictment Tuesday against the former CFO of a Medicaid-funded behavioral health system in North Carolina, according to the Department of Justice.