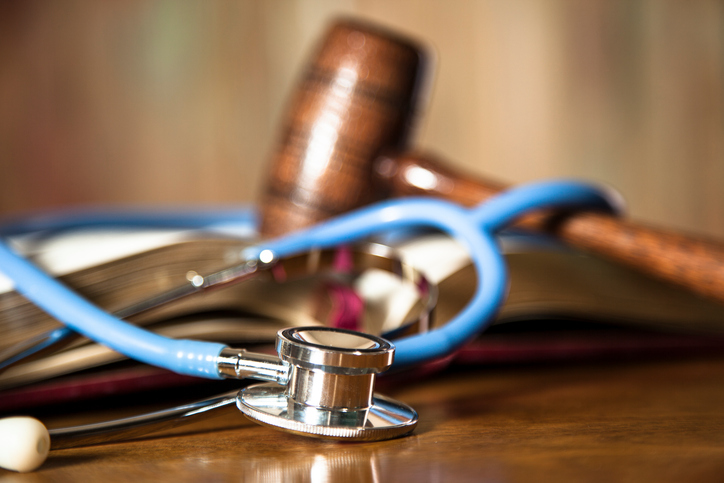 According to the DOJ, this is the ninth consecutive year that the organizations’ civil healthcare fraud settlements and judgments have exceeded $2 billion.

As part of the federal government’s increasing focus on issues of healthcare fraud, particularly in the Medicare space, the U.S. Department of Justice recovered $2.5 billion in settlements and judgments from False Claims Act Cases over the past year.

According to the DOJ, this is the ninth consecutive year that the organizations’ civil health care fraud settlements and judgments have exceeded $2 billion.

“Every year, the submission of false claims to the government cheats the American taxpayer out of billions of dollars,” Principal Deputy Associate Attorney General Jesse Panuccio said in a statement.

“In some cases, unscrupulous actors undermine federal healthcare programs or circumvent safeguards meant to protect the public health … The nearly three billion dollars recovered by the Civil Division represents the Department’s continued commitment to fighting fraudsters and cheats on behalf of the American taxpayer.”

The False Claims Act has its roots in groups trying to defraud the military during and after the Civil War and was significantly strengthened since 1986 when Congress increased incentives for whistleblowers to file lawsuits alleging false claims.

The single largest recovery over the past year was a $625 million settlement paid by drug wholesaler AmerisourceBergen to resolve a number of claims including that the company illegally repackaged injectable cancer drugs into pre-filled syringes and billing multiple doctors for individual drug vials.

The DOJ also brought cases against drug companies who increased drug prices by funding Medicare co-payments meant to serve as a check on healthcare costs.

In one instance, United Therapeutics Corporation paid $210 million over allegations that it illegally used a foundation to funnel co-pay obligations for Medicare patients taking its drugs. Pfizer paid nearly $24 million in a similar case, with the government alleging that the company raised the price of a cardiac drug called Tikosy by 40 percent over three months

On the provider side, the DOJ recovered $270 million from DaVita subsidiary HealthCare Partners Holdings for upcoding and providing inaccurate information to inflate Medicare Advantage payments.

Another major case was against former health system Health Management Associates which allegedly engaged in major Medicare fraud including illegal kickbacks to physicians for referrals, incorrect billing for observation and outpatient services and inflated facility fees.

When it comes to health plans, the government’s case against UnitedHealth Group over allegations that it knowingly obtained inflated risk adjustment payments for its Medicare Advantage beneficiaries is still ongoing. 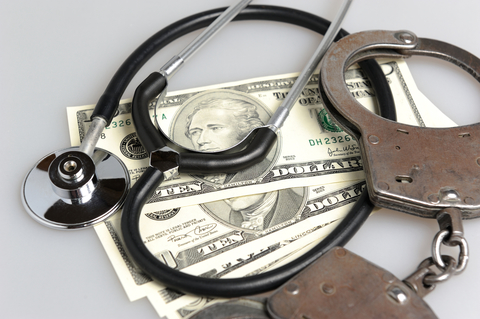 Twenty people—four of whom are doctors—are facing charges related to a massive fraud scheme that bilked Medicare, Medicaid and other managed care organizations out of $146 million.

Prosecutors from the Brooklyn District Attorneys Office said the defendants ran an enterprise in which recruiters offered cash to low-income and homeless patients to get them to undergo a series of medically unnecessary tests at participating clinics.

They then allegedly billed publicly funded insurance programs for performing those tests and laundered the fraudulently obtained funds through the bank accounts of a series of shell companies in far-flung countries such as Taiwan and Lithuania.

Once that money reached the defendants, prosecutors said, they used it to buy expensive real estate—such as a $3.25 million apartment in downtown Brooklyn, New York—and fund shopping sprees at high-end stores like Hermes and Bulgari.

“This massive scheme, which provided no patient care at all, wasted millions of taxpayer dollars dedicated to Medicaid and Medicare,” Acting Brooklyn District Attorney Eric Gonzalez said in the announcement.

The investigation began following a referral from the Department of Health and Human Services Office of Inspector General. To uncover the alleged scheme, investigators employed undercover detectives, intercepted communications and conducted surveillance and financial analyses.

The defendants are facing charges including enterprise corruption, healthcare fraud, grand larceny and money laundering. Prosecutors said 35-year-old Kristina Mirbabayeva, of Brooklyn, was the ringleader of the scheme, and 53-year-old New Jersey resident Kevin Custis, M.D., was her business partner.

Another one of the doctors charged, 61-year-old Robert Vaccarino, was also employed as a New York Police Department surgeon, according to The Wall Street Journal. The police department said Tuesday that Vaccarino had been suspended.

At a news conference this week, representatives from the Brooklyn District Attorneys Office said the scheme was the biggest healthcare case in the office’s history, the article added.

In other antifraud news:

The attorney for Salomon Melgen, M.D., a Florida eye doctor who has been convicted of a $100 million Medicare fraud, argued at a sentencing hearing on Thursday that the government has only proven Melgen stole about $64,000.

Attorney Josh Sheptow said Melgen—who was charged separately with bribing New Jersey Democratic Sen. Bob Menendez—injected patients with then-experimental drugs that are now approved, the Associated Press reported. Sheptow suggested Melgen may have falsified billing statements to get around the fact that Medicare doesn’t pay for experimental treatments—so since the treatments were actually legitimate, the government didn’t lose money on paying for them.

But Assistant U.S. Attorney Alexandra Chase argued that the judge should accept the government’s estimate that Melgen stole $136 million, noting that even if he stole half as much, he would be eligible for a life sentence. Prosecutors are asking for a 30-year sentence.

Bribes paid to a state health administrator are central to one of the biggest healthcare fraud cases to date, according to federal authorities.

The Department of Justice has charged Bertha Blanco, a former employee at Florida’s Agency for Health Care Administration (AHCA) with bribery in connection with a $1 billion Miami fraud case. Federal investigators said Blanco received bribes from Philip Esformes, the CEO of a Miami chain of skilled nursing facilities and assisted-living facilities, and his associates.

Blanco received cash bribes from Medicare and Medicaid providers in exchange for confidential AHCA reports, including patient complaints and unannounced AHCA inspection schedules that were then used to make false Medicare and Medicaid claims, according to DOJ. Blanco did not receive payouts directly from Esformes but through a series of intermediaries, the Miami Herald reports.

Esformes, who made FierceHealthcare’s list of notorious healthcare executives last year, has been charged with fraud and bribery in the case. He has been behind bars in federal prison since July 2016 awaiting a trial set for March 2018.

Blanco’s defense attorney Robyn Blake told the Herald that she is reviewing the DOJ’s evidence before deciding to pursue a full trial or take a plea deal. Blanco was arrested earlier this month and was released on $250,000 bond; she will be arraigned on Sept. 1.

Esformes’ attorneys maintain his innocence, according to the Herald. Two of the Esformes’ alleged co-conspirators have pleaded guilty to Medicare fraud charges, and Michael Pasano, Esformes’ lead attorney, said the pair worked independently without Esformes’  involvement.

In other fraud news, Vanderbilt University Medical Center has paid out $6.5 million to settle a federal lawsuit that alleged the hospital overbilled Medicare and Medicaid, the Associated Press reports.

The suit was brought in 2013 by whistleblowers who claimed the hospital overbilled federal healthcare programs for more than a decade. Vanderbilt’s counsel, Michael Regier, said that the settlement aimed to avoid further costs and distractions related to the suit, according to the article, and that the hospital still disputes the claims in the lawsuit.

The hospital and the feds found no evidence of wrongdoing on Vanderbilt’s part, Regier said.

Six months after Tenet Healthcare reached an agreement to pay $514 million in penalties for an alleged kickback scheme, one of its former executives has been indicted for his part in the plan to pay bribes for patient referrals.

The Department of Justice announced Wednesday that it has indicted John Holland, 60, of Dallas in his role in a $400 million scheme to defraud the government, Georgia and South Carolina Medicaid Programs, and prospective patients of Tenet hospitals.

The indictment alleges Holland was involved in a scheme to pay bribes for patient referrals. which helped Tenet bill the Georgia and South Carolina Medicaid Programs more than $400 million and obtain more than $149 million in Medicaid and Medicare payments based on those patient referrals.

Holland pled not guilty to the charges during a court hearing, Reuters reported. His lawyer, Richard Deane, said Tenet’s agreement in August to settle criminal charges and civil claims, should have resolved this issue.

“Mr. Holland is not guilty and we now look forward to presenting this case to a jury,” Deane said in a statement to Reuters.

But Acting Assistant Attorney General Blanco said in a statement from the DOJ that “these charges underscore our continued commitment to holding both individuals and corporations accountable for their fraudulent conduct.“We will follow the evidence where it takes us, including to the corporate executive ranks.”

The owner of more than 30 Miami-area skilled nursing and assisted living facilities, a hospital administrator and a physician’s assistant were charged with conspiracy, obstruction, money laundering and healthcare fraud in connection with a $1 billion scheme involving numerous Miami-based providers, the United States Department of Justice announced.

Assistant Attorney General Leslie Caldwell of the Justice Department’s Criminal Division said in a statement that the charges represent the largest single criminal healthcare fraud case ever brought against individuals by the DOJ.

Philip Esformes, 47, Odette Barcha, 49, and Arnaldo Carmouze, 56, all of Miami-Dade County, Florida, were charged in an indictment claiming that Esformes operated a network of more than 30 skilled nursing homes and assisted living facilities known as The Esformes Network, which gave him access to thousands of Medicare and Medicaid beneficiaries.

Barbara Sadler, the 63-year-old owner of Extraordinary Care Network, a Baton Rouge, La.-area attendant care services company, has been sentenced to 44 months in prison for her role in a scheme to defraud the Louisiana Medicaid program of more than $1 million, according to the Department of Justice.

The company’s CFO Sedric C. Blakes, 42, has been ordered to spend three years behind bars for his role in the scheme.