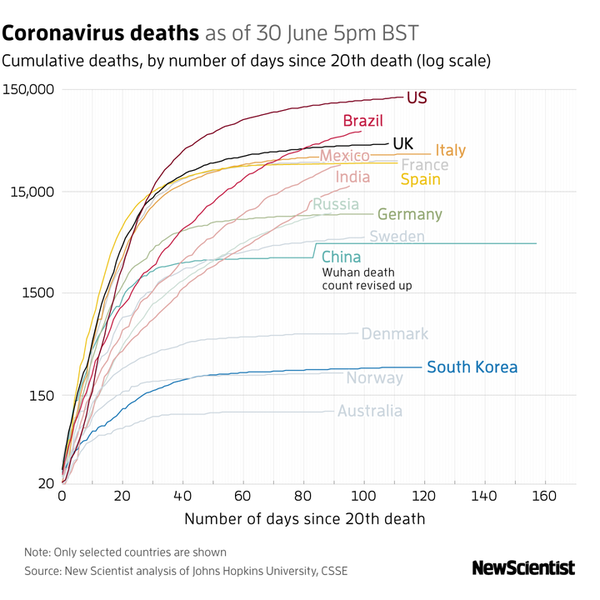 In the six months since the World Health Organization (WHO) detected a cluster of atypical pneumonia cases at a hospital in Wuhan, China, the coronavirus pandemic has touched every corner of the globe, carving a trail of death and despair as humankind races to catch up.

At least 10.4 million confirmed cases have been diagnosed worldwide, and the true toll is likely multiples of that figure. In the United States, health officials believe more than 20 million people have likely been infected.

A staggering 500,000 people around the globe have died in just six months. More people have succumbed to the virus in the U.S. — 126,000 — than the number of American troops who died in World War I.

But even after months of painful lockdowns worldwide, the virus is no closer to containment in many countries. Public health officials say the pandemic is getting worse, fueled by new victims in both nations that have robust medical systems and poorer developing countries.

“We all want this to be over. We all want to get on with our lives. But the hard reality is this is not even close to being over,” WHO Director-General Tedros Adhanom Ghebreyesus said Monday. “Globally, the pandemic is actually speeding up.”

In the U.S., the fierce urgency of March and April has given way to the complacency of summer, as bars and restaurants teem with young people who appear largely convinced the virus poses no threat to them. New outbreaks, especially among younger Americans, have forced 16 states to pause or roll back their reopening plans.

“This is a really challenging point in time. It’s challenging because people are tired of the restrictions on their activity, people are tired of not being able to socialize, not being able to go to work,” said Richard Besser, a former acting director of the Centers for Disease Control and Prevention (CDC) who now heads the Robert Wood Johnson Foundation.

“You have people who have reached that point of pandemic fatigue where they just don’t want to hear it anymore, they just want to go back to their life,” he added.

The number of new U.S. cases has risen sharply in recent weeks, led disproportionately by states in the South, the Midwest and the Sun Belt. More than a quarter-million people tested positive for the coronavirus last week, and more than 40,000 tested positive on three consecutive days over the weekend.

“We are now having 40-plus thousand new cases a day. I would not be surprised if we go up to 100,000 a day if this does not turn around. And so I am very concerned,” Anthony Fauci, director of the National Institute for Allergy and Infectious Diseases, told a Senate panel on Tuesday.

Public health experts now worry that a rising tide of death is about to crest across the United States. Officials in Alabama, Arizona, California, Mississippi and Texas are reporting a surging number of COVID-19 hospitalizations, leading to fears that health systems could soon be overrun.

“If you’re over the hospital capacity, people will start dying faster,” said Eric Feigl-Ding, an epidemiologist and health economist at the Harvard T.H. Chan School of Public Health and a senior fellow at the Federation of American Scientists.

Already, Arizona has reported more coronavirus deaths per million residents in the last week, at 4.77, than any nation on Earth except Chile and Peru.

The response to the coronavirus pandemic has varied widely, and in some parts of the world, both wealthy and developing nations have brought it under control. In the U.S., some states hit hard early on have wrangled transmission under control.

But even in states that have achieved some measure of success, the spikes in cases stand in stark contrast to countries that have bent the epidemiological curves to manageable levels.

Mass screenings in South Korea crushed the spread, and quick action to identify and isolate contacts in more recent hot spots have meant new outbreaks are quickly contained. South Korea, with a population of 51 million, has reported just 316 new cases in the past week, fewer than the number of new cases reported in Rhode Island, a state with slightly more than 1 million residents.

Germany raced to protect its elderly population and rapidly expanded its hospital capacity. It deployed the world’s most successful diagnostics test, developed at a Berlin hospital, on a massive scale. With a population of 83 million, the country has reported 78 coronavirus deaths in the past week; Mississippi, population 3 million, reported 96 coronavirus-related deaths during the same period.

Those countries have begun loosening restrictions on their populations and their economies, with few signs of major flare-ups.

The United States has begun to open up too but without bending the curve downward, and the results have been disastrous. The number of daily confirmed cases has more than doubled in nine states over the past two weeks and has increased by more than half in 17 more.

“I have really grave concerns that viral transmission is going to get out of control,” Besser said.

In interviews, public health experts and epidemiologists confess to feelings of depression and disgust over the state of the nation’s response. Some remain exasperated that there is still no coordinated national response from the White House or federal agencies.

President Trump has rarely mentioned the virus in recent weeks, aside from using racial epithets and suggesting his administration would slow testing to reduce the number of confirmed cases. He later said he was joking.

“There should be some sort of federal leadership,” Feigl-Ding said. “Every state’s on its own, for the most part.”

Left to their own devices, some states are trending in the right direction. Connecticut, Maryland, New Hampshire, New York, North Dakota, Rhode Island, South Dakota and the District of Columbia have seen their case counts decline for two consecutive weeks or more. New York reported 4,591 new cases in the last week — a startlingly high figure but only a fraction of the 65,000 cases infecting the state during its worst week, in early April.

States with their numbers on the decline have benefited from fast action and strict measures. They’re also viewed as role models for states that are now experiencing surges.

“States who are now on the rapid upslope need to act quickly, take the advice and example of states that have already been through this,” said Abraar Karan, an internist at Brigham and Women’s Hospital and Harvard Medical School. “We know what needs to be done to win this in the short run, and we are working on what needs to happen for the longer term.”

If there is a silver lining, it is that the number of tests American states are conducting on a daily basis has grown to about 600,000, on its way toward the millions the nation likely needs to fully control the spread.

But that silver lining frames a darkening cloud: As the virus spreads, even the higher testing capacity has been strained, and state and local governments are hitting their limits and running low on supplies.

The greater number of tests does not account for the speed of the spread, as Trump has suggested. The share of tests that come back positive has averaged almost 7 percent over the last week, according to The Hill’s analysis of national figures; in the first week of June, just 4.6 percent of tests were coming back positive.

If greater testing were responsible for more cases, the percentage coming back positive should decrease rather than increase. The higher positive rates are an indication the virus is spreading more rapidly.

As with so much else in American life, the coronavirus has become a political battleground. The new front is over face masks, which studies show dramatically reduce transmission. States that have mandated wearing masks in public saw the number of new cases decline by a quarter between the first and third weeks of June; states that do not require masks in any setting saw the number of cases rise by 84 percent over that same span.

“From a public health perspective, it’s demoralizing, it’s tragic … because our public health leaders know what to do to get this under control, but we’re in a situation where the CDC is not out front in a leadership role. We’re not hearing from them every day. They’re not explaining and capturing people’s hearts and minds,” said Besser, the former CDC chief. “If we have a vaccine, that will be terrific if it’s safe and effective. But until that point, these are the only tools we have, these tools of public health, and they’re very crude tools.”