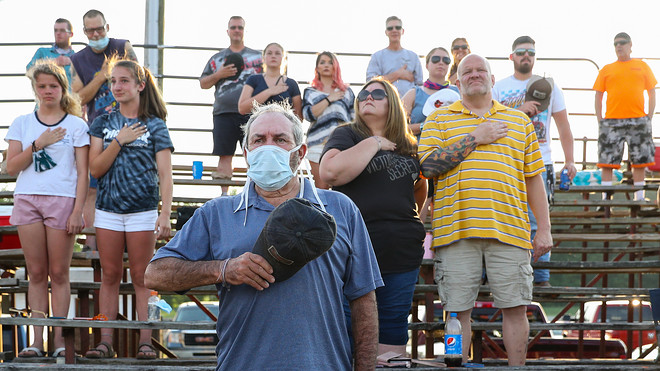 Even as the surging Covid-19 pandemic has inspired a broad majority of Americans to start wearing face masks indoors, the practice still remains rare outside, with a new Gallup poll finding that fewer than half of Americans wear face masks outside in non-socially distanced settings, despite many mask-wearing mandates now requiring them to do so.

While 81% of poll respondents say they always or usually wear a mask indoors when social distancing isn’t possible, only 47% say they wear a face mask outdoors when they cannot socially distance.

The practice is more common among Democrats, with 64% saying they wear a mask outdoors as compared with 43% of Independents and only 23% of Republicans.

Research has shown that Covid-19 appears to be more easily transmitted indoors, though outdoor settings still pose some risk, and Gallup notes the poll findings “could indicate a potential for increased spread of the disease” in outdoor venues like beaches.

Many state or local mask-wearing mandates include outdoor settings where social distancing isn’t possible, and multiple areas, including New Jersey and Oregon, have also imposed additional orders specifying masks must be worn outdoors in many circumstances.

“We know this virus is a lot less lethal outdoors than indoors, but that does not mean it is not lethal,” New Jersey Gov. Phil Murphy said in a statement about his July executive order requiring masks outdoors. “The hotspots we’re seeing across the nation and certain worrisome transmission trends in New Jersey require us to do more.”

66,740: The number of lives that could be saved in the U.S. by December 1 if 95% of people “were to wear masks when leaving their homes,” as projected Thursday by the Institute for Health Metrics and Evaluation (IHME) at the University of Washington’s School of Medicine. The IMHE’s model projects 295,011 deaths by December, which would drop by 49% to 228,271 with “consistent mask-wearing.”

Mask wearing has become a major point of contention as Covid-19 has rapidly spread across the U.S. Though many states and localities have imposed mask-wearing mandates, the orders have been resisted by many GOP governors, including in states like Florida that have been particularly hard-hit by the virus. While President Donald Trump initially made mask-wearing a partisan debate through his refusal to don a mask, the president has shifted to promoting the practice in recent weeks, tweeting a photo of himself in a mask that called mask-wearing “patriotic” and urging supporters to wear a mask in a recent campaign email. Prominent Republicans including Senate Majority Leader Mitch McConnell have also vocally advocated for mask-wearing, with McConnell saying Thursday on CNBC that wearing a mask is “the single most significant thing everybody in the country can do to help prevent the spread.”