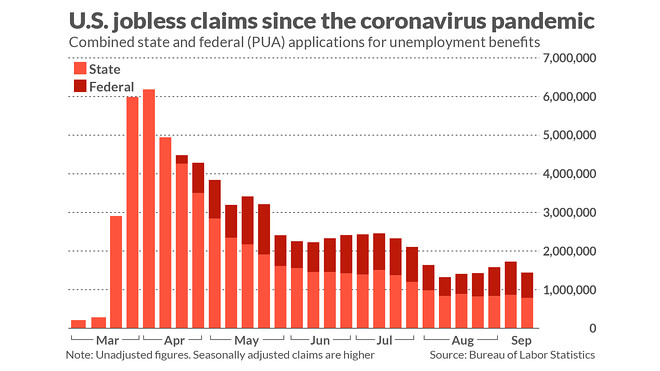 Initial claims for state benefits totaled 790,000 before adjusting for seasonal factors, the Labor Department reported Thursday. The weekly tally, down from 866,000 the previous week, is roughly four times what it was before the coronavirus pandemic shut down many businesses in March.

“It’s not a pretty picture,” said Beth Ann Bovino, chief U.S. economist at S&P Global. “We’ve got a long way to go, and there’s still a risk of a double-dip recession.”

The situation has been compounded by the failure of Congress to agree on new federal aid to the jobless.

A $600 weekly supplement established in March that had kept many families afloat expired at the end of July. The makeshift replacement mandated by President Trump last month has encountered processing delays in some states and has funds for only a few weeks.

“The labor market continues to heal from the viral recession, but unemployment remains extremely elevated and will remain a problem for at least a couple of years,” said Gus Faucher, chief economist at PNC Financial Services. “Initial claims have been roughly flat since early August, suggesting that the pace of improvement in layoffs is slowing.”

Federal data suggests that the program now has more beneficiaries than regular unemployment insurance. But there is evidence that both overcounting and fraud may have contributed to a jump in claims.