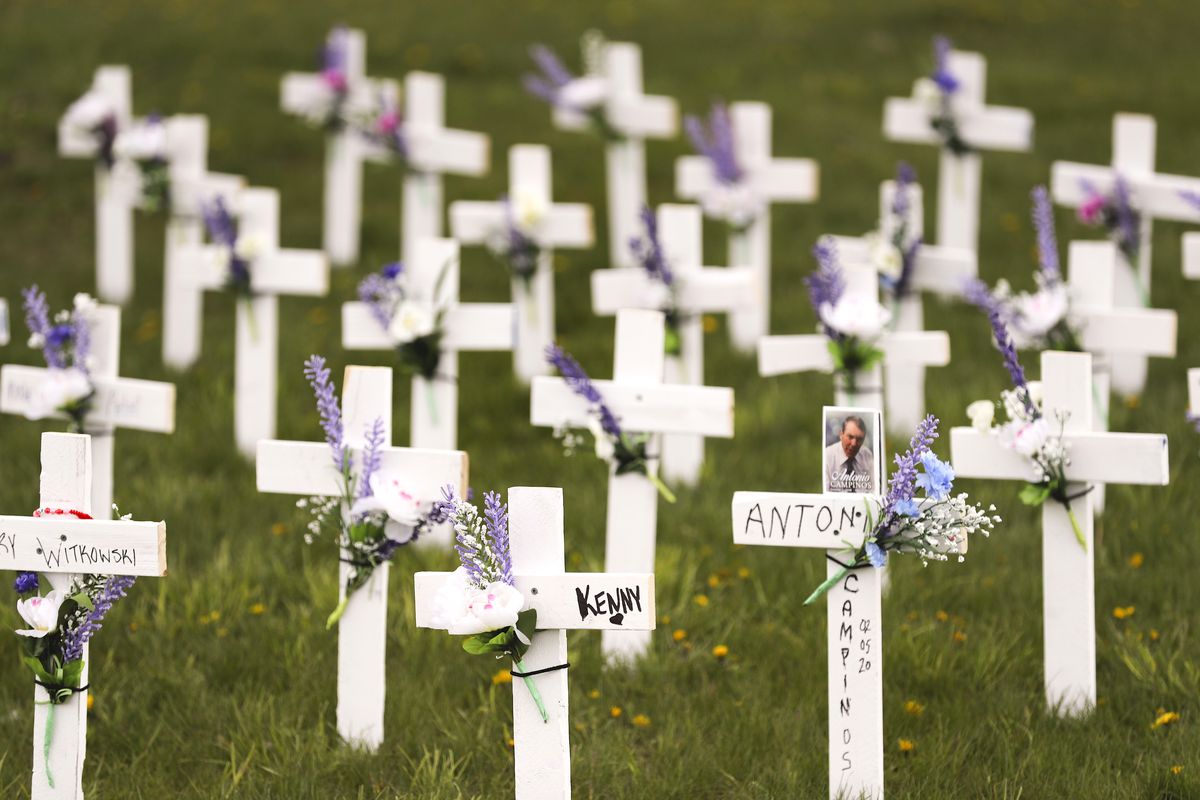 Nursing homes account for 81 percent of Covid-19 deaths in the country. How did this happen?

Canada’s response to the coronavirus pandemic has generally been viewed as a success, with experts pointing to its political leadership and universal health care system as factors.

But there has been one glaring failure in Canada’s fight against the pandemic: its inability to protect the health of its senior citizens in nursing homes and long-term care facilities.

The situation for these seniors is so dire that the police — and even the military — have been called in to investigate why so many are dying.

In Quebec, some residents have been left for days in soiled diapers, going hungry and thirsty, and 31 residents were found dead at one home in less than a month, leading to accusations of gross negligence. In Ontario, the military found shocking conditions in five homes: cockroaches and rotten food, blatant disregard for infection control measures, and treatment of residents that was deemed “borderline abusive, if not abusive.”

“It’s a national shame,” said Nathan Stall, a geriatrician at Toronto’s Sinai Health System. “I don’t think we’ve done a good job at all in Canada.”

A whopping 81 percent of the country’s coronavirus deaths are linked to nursing homes and long-term care facilities. That means roughly 7,050 out of 8,700 deaths to date have been among residents and workers in these facilities.

In terms of raw numbers, that may not seem like very much. (For comparison, more than 40,000 US coronavirus deaths have been linked to nursing homes.) And, to be clear, Canada is hardly alone in watching tragedy unfold in these facilities. The US and Europe have seen startling numbers of fatalities among nursing home staffers and residents.

But 81 percent is a staggering statistic, especially for Canada, a country that prides itself on its progressive health policies. And it’s higher than the rate in any other country for which we have good data. In European countries, roughly 50 percent of coronavirus deaths are linked to these facilities. In the US, it’s 40 percent.

Experts say a number of factors are probably involved in Canada’s collapse on the nursing home front, like the fact that Canada has done well at controlling community spread outside these facilities (making nursing home deaths account for a greater share of overall deaths) and that residents in Canadian homes tend to be older and frailer than those in US homes (and thus more vulnerable to severe cases of Covid-19). But they say the high death rate in the homes is due, in large part, to egregious problems with the homes themselves.

“I think we have serious issues with long-term care,” said Vivian Stamatopoulos, a professor at Ontario Tech University who specializes in family caregiving. Experts have been warning political leaders about this for years, but, she said, “they’ve all been playing the game of pass the long-term care hot potato.”

Furious over how their elders are being treated, some Canadians have started petitions, protests, lawsuits, and even hunger strikes outside the homes. They say the government’s failure to respond reveals a deeper failure to care about seniors and people with disabilities, and to make that care concrete by sending facilities what they urgently need: more tests, more personal protective equipment (PPE), and more funding to pay staff members so they don’t have to work multiple jobs at different facilities.

Prime Minister Justin Trudeau has acknowledged that the situation in the facilities is “deeply disturbing.” He’s sent hundreds of military troops to help feed and care for the seniors in certain homes, where burnout and fear have prompted some staff members to flee their charges. But to some extent, Trudeau’s hands are tied because the facilities fall under provincial jurisdiction.

That leaves families terrified for their loved ones. They’re asking: Why have things gone so terribly wrong? How could this happen in Canada?

Canada’s crisis was a long time in the making

The first thing to understand is that Canada’s universal health care system does not cover nursing homes and long-term care facilities. That means these institutions are not insured by the federal system. Different provinces offer different levels of cost coverage, and even within a given province, you’ll find that some homes are publicly run, others are run by nonprofits, and still others are run by for-profit entities.

“This is the main problem — they don’t fall under the Canada Health Act,” said Stamatopoulos, adding that the same is not true of hospitals. “That’s why you see that the hospitals did so well. They had the resources.”

From the standpoint of someone in the US, where more than 132,000 people have died of Covid-19, Canada may seem to be doing well overall: The death toll there is around 8,700. Per capita, Canada’s coronavirus death rate is roughly half that of America’s. It’s clear that the northern neighbor has been doing better at keeping case numbers down, partly because it’s giving safer advice on easing social distancing.

Which makes the dire situation in nursing homes stand out even more. Longstanding problems with Canada’s nursing homes have clearly fueled the tragic situation unfolding there.

These homes are chronically understaffed. They tend to hire part-time workers, underpay them, and not offer them sick leave benefits. That means the workers have to take multiple jobs at different facilities, potentially spreading the virus between them. Many are immigrants or asylum seekers, and they fear putting their precarious employment at risk by, say, taking a sick day when they need it. (These problems aren’t unique to Canada, but as in other countries, they’ve been thrown into stark relief by the pandemic.)

A lot of Canadian homes also have poor infrastructure, built to the outdated design standards of the 1970s. Residents often live four to a room, share a bathroom, and congregate in crowded common spaces. That makes it very difficult to isolate those who get sick.

These problems are even worse in Canada’s for-profit nursing homes. Research shows that these private facilities provide inferior care for seniors compared to the public facilities, in large part because they hire fewer staff members and put fewer resources into upgrading or redesigning their buildings. The for-profit model incentivizes cost-cutting. (Similarly problematic profit motives and poor living conditions persist in US nursing homes, too.)

Canadian experts have been raising the alarm about these issues for more than a decade. So why haven’t they been addressed?

“Frankly, overall, it really reflects ageism in society. We choose not to invest in frail older adults,” Stall said. He added that early on in the pandemic, the public imagination latched onto stories of relatively young people on ventilators in hospitals. The hospitals and their staff got resources, free food, nightly applause. Homes for older people didn’t get the same attention.

“Nursing homes are not something we’re proud of societally. There’s a lot of shame around even having someone in a nursing home,” Stall said.

Stamatopoulos noted there are other forces at play, too. “I’d say it’s a trifecta of ageism, racism, and sexism,” she said. “When you look at this industry, it’s majority female older residents being cared for by majority racialized women.”

Ronnie Cahana, a 66-year-old rabbi who lives with paralysis at the Maimonides Geriatric Centre in Montreal, recently wrote a letter to Quebec’s premier. “I am not a statistic. I am a fully sentient, confident human being, who needs to have my humanity honored,” he wrote, adding that the premier should help the workers who take care of people like him. “Many of them are immigrants, newly beginning their lives in Quebec. … Please give them all the resources they require. Listen to their voices.”

How to make nursing homes safer — in Canada and beyond

If you want to keep nursing homes from becoming coronavirus hot spots, look to the strategies that have proven effective elsewhere. For months now, Canadian public health experts and advocates have been begging leaders to do just that.

All residents and workers in nursing homes should be tested regularly, whether they show symptoms or not. Anyone who gets sick should be isolated in a separate part of the building or taken to the hospital. Workers should be given adequate PPE, and universal masking among them should be mandatory. Working at multiple homes during the pandemic should be disallowed.

“Look at South Korea. They’ve had no deaths in long-term care because they treated it like SARS right from the get-go,” Stamatopoulos said. “They did aggressive testing. They were strict in terms of quarantining any infected residents and were quick to move them to hospitals. We’ve done the opposite.” Earlier in the pandemic, some Canadian hospitals sent recovering Covid-19 patients back to their nursing homes too soon; they inadvertently infected others.

“And look at New York state,” Stamatopoulos continued. “Gov. Cuomo signed an executive order on May 10 requiring all staff and residents to be tested twice a week. That aggressive testing helped halt the outbreaks in the homes.” Quebec and Ontario have yet to do this.

British Columbia, a Canadian standout at preventing deaths in nursing homes, adopted several wise measures early on. Way back on March 27, the western province made it illegal to work in more than one home — and topped up workers’ wages so they wouldn’t have to. It gave them full-time jobs and sick leave benefits.

It’s clear that so long as long-term care falls under provincial jurisdiction, nursing home residents will be better off in some provinces than in others. So some Canadian experts, including Stamatopoulos, are arguing that these facilities should be nationalized under the Canada Health Act. Others are not sure that’s the answer; Stall thinks it may make sense to target only for-profit homes, compelling them to improve their poor infrastructure. In the long term, any homes that do not meet modern standards should be redesigned.

Another lesson for the long term comes from Hong Kong, which has managed to totally avoid deaths in its nursing homes. Even before the coronavirus came along, all homes had a trained infection controller who put precautions in place to prevent the spread of infections. (US homes saw a similar system enacted under President Obama, but President Trump has proposed that it be rolled back.) Four times a year, Hong Kong’s homes underwent pandemic preparedness drills so that if an outbreak occurred, they’d be ready with best practices. It did, and they were.

Preparedness clearly saves lives. Hopefully, Canada and other countries will learn that lesson going forward so that no more lives are needlessly lost.

As Cahana, the resident in the Montreal home, said, “Each of us is crying to be heard. We say: More life! Please! We are not afraid of the future. We are afraid that society is forgetting us.”