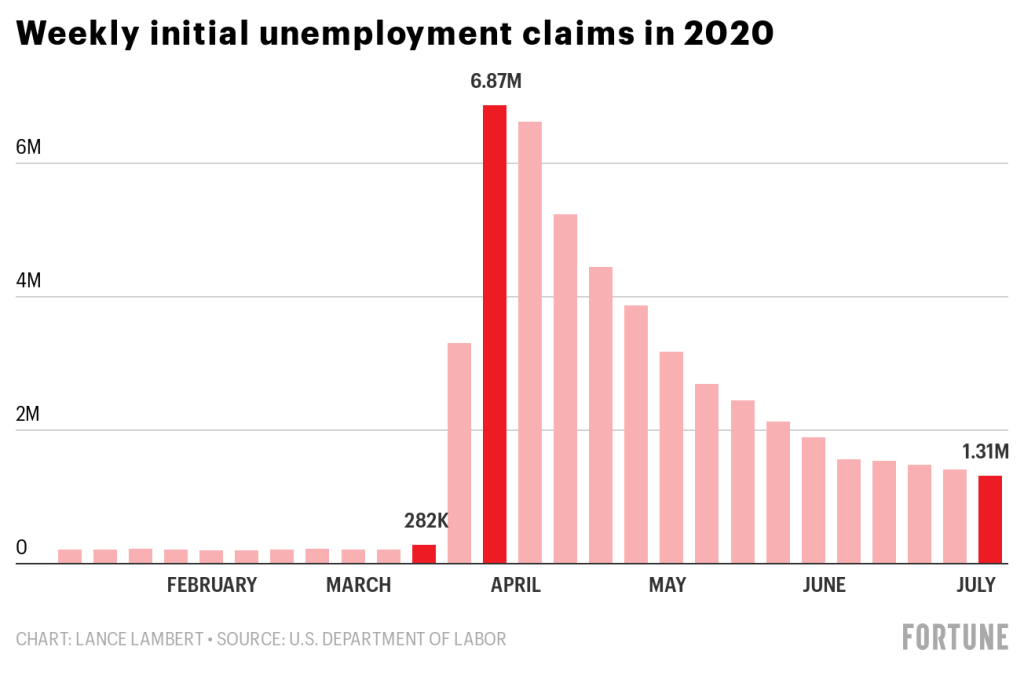 1.2 million Americans sought the benefits last week, down slightly from the week before.

The number of newly filed unemployed insurance claims dropped last week after two straight weeks of rising, but it remains well above historic pre-pandemic levels, according to Labor Department data.

A total of 1.19 million people filed new claims last week, down from 1.43 million the week previously. The numbers of new claimants have come down from their peak in March of more than six million, but they are still well above the pre-pandemic record of 695,000 from 1982.

Another 656,000 new claims were filed for Pandemic Unemployment Assistance, the benefits offered to gig and self-employed workers.

The number of people continuing traditional unemployment claims, from the week ending July 25, was 16.1 million, down about 844,000 from the week prior. (The statistic lags by a week.) When including the PUA, more than 32.1 million Americans are currently receiving some form of unemployment benefits.

“It is promising that the initial unemployment numbers have ticked down,” said AnnElizabeth Konkel, an economist at Indeed Hiring Lab. “But we aren’t out of the woods yet. The claims are still much higher than the pre-covid era, so it’s still pointing to a lot of economic pain.”

The numbers come during what many economists say is an inflection point for the country’s economy.

Congress continues to wrangle over an extension to the extra $600 a week in unemployment benefits that many laid off workers say have helped stabilize their finances — and stave off a deeper crisis from an economy hollowed by evictions, mortgage and credit card defaults, and plunging consumer demand. Those benefits expired last week.

Funds from the Paycheck Protection Program, the $660 billion federal aid program that was meant to help small businesses keep workers on the payroll, are in the process of running out, as well. And the coronavirus’ frightening march since mid-June has added to uncertainty about when — or even if — the country can expect a return in the near future to what was considered a normal way of life and doing business not that long ago.

There are many indications that workers are getting laid off for a second time in just a few short months. In California, for example, which has one of the highest rates of workers on unemployment insurance, an analysis by the University of California, Los Angeles, and the California Employment Development Department found that more than half — 57 percent — of initial unemployment claims filed during the week ending July 25th were from workers re-opening older claims, a large majority of which had been filed early in the crisis.

The unemployment rate for July, as well as the number of jobs added or lost, will be released Friday by the Bureau of Labor Statistics, from a survey taken early in the month. Many economists expect the country’s unemployment rate to drop from the 11.1 percent it was at in June; but due to the survey’s lag, many caution that the release will not register more recent economic developments that have emerged in recent weeks as the the pandemic has caught up with the country’s economic rebound.