Just days after a landslide election victory for the Conservative Party, Britain’s Prime Minister Boris Johnson just made a massive and bold announcement: He’ll get laws passed to guarantee plenty of cash for the state-run healthcare system.

The official announcement will likely come Thursday when the Queen, who is the official head of state, will reopen Parliament and outline the coming legislative agenda. Tucked within her speech will be a call for £34 billion ($45 billion) in annual taxpayer money for the National Health Service (NHS).

While other countries embrace their private health systems, the British love their publicly funded NHS, an employer of 1.5 million people, which services the population of 66 million. In general, the people are concerned about the quality of care provided by the NHS and look to the government for solutions, says Mary Macleod, a senior client partner for Korn Ferry’s Board and CEO Services practice and a former Conservative Party MP. “The NHS does become a bit of a political football,” she says. “And to a large extent, everyone in the UK feels that they are stakeholders in it.”

The pledge to secure NHS money will likely bolster Johnson’s political leadership versus the opposition Labour Party. And the move also neutralizes critics that have barraged the Conservative Party with allegations that it would sell parts of the NHS to foreign investors. In other words, pushing a new funding law through Parliament could partially neutralize political opponents.

But the politics of the matter is only part of the announcement’s strength, Macleod says. Promising the NHS years of generous financing will allow the organization to develop a strategy for how it will care for the country’s population for years into the future. In short, Macleod says, it sends a message to the NHS leadership: You can get busy now. “If you now know you are getting the funding, you can plan ahead,” she says.

Johnson’s lack of specifics about how the NHS should spend the money could be a strength. In a sense, he has empowered the organization’s leadership to make the decisions that they deem suitable. “What the prime minister is not doing is defining the solutions,” Macleod says. But she also notes that he will want results in the form of improved service from the organization. “He will hold them accountable,” she says.

While there are benefits when leaders take bold steps, there are also risks, says Christina Harrington, Korn Ferry’s head of advisory services in Stockholm, Sweden. She says it is good for leaders to act quickly and with conviction, as the public expects that of its leaders. But that alone isn’t enough. She says the problem comes when there’s too much ego involved. “You need an egoless conviction to drive a decision making the greater good,” she says.

Ideally, the driver of proposed changes needs to have a long-term vision of something better than the current situation. If that vision is lacking, then the leader may lack the required stamina to get the job done. Indeed, if headline-grabbing is all that the boss wants, then he or she might wind up doing a U-turn. “If there isn’t a long-term vision, then another fast decision may come in the other direction,” Harrington says. “And that’s what we see a lot of.” 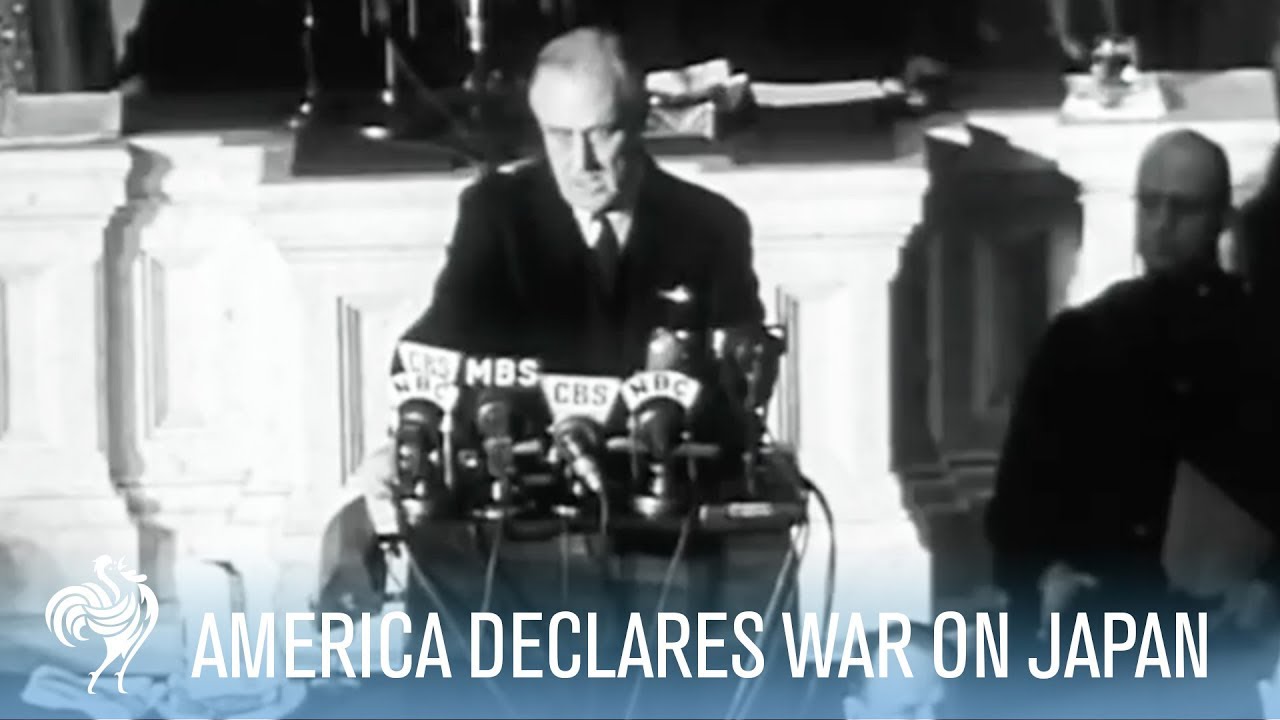 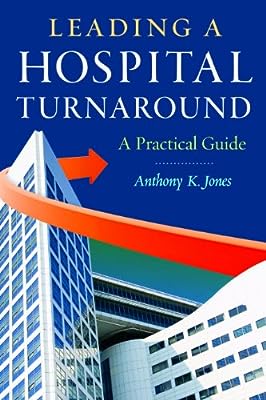 Operational changes can improve a hospital’s performance and prospects, but time is of the essence.

The challenges many community hospitals face have become so unrelenting as to threaten long-term financial viability. It’s important that this threat be met with prompt action and operational changes that can improve the immediate situation as well as sustainability. A formal turnaround plan includes analyses and actions, and becomes a roadmap to redirect hospitals and help them stay on track to serve as community resources for years to come.

What prevents some struggling hospitals from getting an earlier start on a turnaround plan?

JK: Leaders from ailing community hospitals sometimes don’t recognize the severity of their problems or that certain indicators call for quick, corrective action. Some common alarm signals that leaders may tune out at first include a downward trend of days cash on hand, shifts in patient volume across the delivery spectrum, medical staff dissatisfaction or defection, and even bond covenant concerns. Recognizing that problems need to be addressed and changes must be made is the first step toward improvement.

Once it’s clear that “business as usual” isn’t working, how does the turnaround process start?

JK: Typically, the process starts with an operational assessment to evaluate strategy, operations, supply chain, revenue cycle and leadership with the aim of reducing costs and increasing revenue—the tried-and-true formula for financial solvency. The analysis includes a review of data and documents, as well as interviews with board, executive and physician leaders. The process reveals any organizational problems or vulnerabilities that aren’t immediately apparent, and it forms the basis for a turnaround plan, including a detailed action plan. An open mind and fresh perspective are important to be able to see options to go beyond operations as they have always been.

What are some of the key areas an operational assessment looks at for potential savings and cost reduction?

JK: Almost every hospital has room to improve staff productivity. Labor is a hospital’s greatest expense, so optimizing productivity by having the right number and mix of staff can make a big impact. Community hospitals that do not have a productivity tool to achieve and maintain the right staffing levels can typically find savings of 15 to 20 percent in salaries and benefits by implementing a tool. In those hospitals where there’s already some productivity monitoring, implementing a more effective tool or improving processes can result in 5 to 10 percent savings. After labor, supply costs are the second highest expense for a hospital, so that’s another key focus area for cost reduction and savings. Industry benchmarks show that many community hospitals have an opportunity to reduce supply costs by as much as 20 percent.

Assessing revenue cycle is also imperative to help identify, monitor and collect every dollar a hospital is due. Gains can be made in this area by renegotiating health plan contracts, streamlining billing for faster payment, auditing medical record coding and reviewing the chargemaster.

Why do the early stages of a turnaround include benchmarking?

JK: Hospitals can potentially identify significant cost-saving opportunities by comparing themselves to hospitals of similar size and volume. Comparing clinical, operational and financial data also identifies areas for improvement and where to allocate time and money for improvement initiatives. For example, a CHC-managed hospital that recently underwent a successful turnaround had discovered through benchmarking that its staff ratios were higher and its benefits were more expensive compared to similar hospitals. This information prompted leaders to take a closer look at the hospital’s situation, and they found it made sense from a sustainability perspective to downsize staff and bring benefit packages to competitive levels. These actions slashed the hospital’s annual expenses by $5.3 million.

To support and sustain a turnaround effort, who needs to be involved?

JK: It’s a collaborative process requiring the participation of the board of trustees, executive leaders, physician leaders, and in many cases an outside management firm to evaluate the situation and develop a specific plan of action. As we discussed, leaders of struggling hospitals usually see the need for improvement but don’t recognize the severity of their situation. Because of that blind spot, it’s often external stakeholders or bondholders who set corrective action in motion by seeking outside assistance. 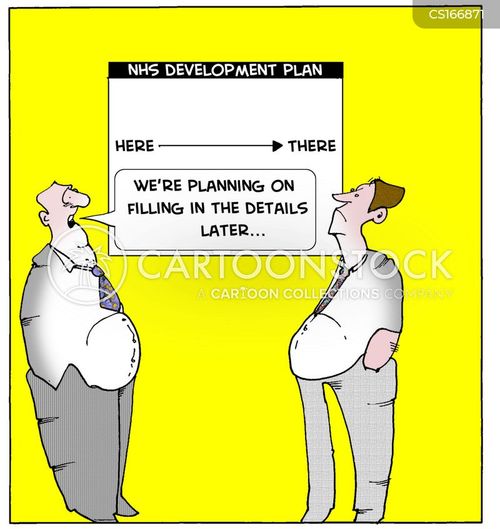 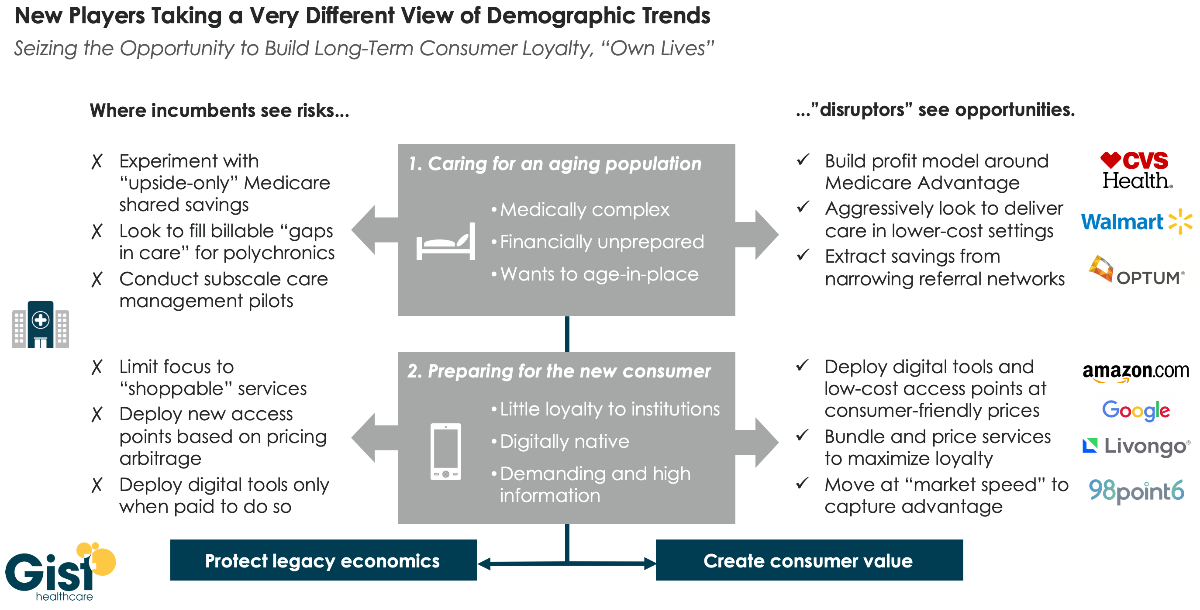 As we’ve discussed before, our view is the healthcare system faces two fundamental demographic challenges across the next decade.

The first is how to sustainably accommodate 80M Baby Boomers—all of whom will be over 65 within the next ten years and in the Medicare program. This will entail providers learning to care for seniors in a much lower cost, lower intensity way, and payers (the federal government and insurers) to design benefits, networks and reimbursement approaches that support a more appropriate model of care delivery.

The second, often less discussed, is how to adapt traditional delivery approaches for the (even larger) Millennial generation, who will enter their “fix me” years within the next decade, and bring their high-demand, high-information, digitally-oriented consumption behaviors to an industry that has been built for older consumers more accustomed to the “hurry up and wait” model.

Our concern for incumbents, as the graphic suggests, is that they view these two demographic challenges through the lens of their current business models and seek to protect their legacy economics.

We commonly hear provider executives talk about “taking a wait and see attitude” and having a bias toward “no-regrets moves”. Why should we embrace price transparency, destroy demand for our own services, or disrupt ourselves, while we’re still making so much money on fee-for-service medicine?

But self-disruption is becoming an urgent priority as newly-emboldened outsiders look to upend the traditional model. Players like CVS, UnitedHealth Group and others view now as the time to assemble low-cost delivery assets and redesign network and benefit structures to capture the loyalty of those Boomers in Medicare Advantage plans for the next decade or more. And technology companies from Amazon to Google see an immediate opportunity to build new models around consumer loyalty as well, moving at Internet speed.

The sooner incumbents wake up to the reality that these unprecedented demographic forces demand a new approach to doing business, the better their chance of avoiding being outflanked by these kinds of disruptors.