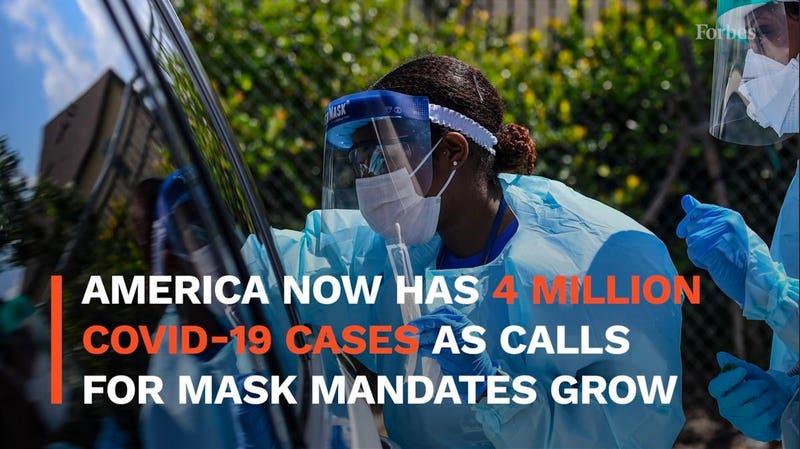 Seven months since the first coronavirus case in the country was reported, the United State’s total infection count passed the 4 million milestone Thursday, according to a tally from The New York Times, a brutal marker as cases continue to rise in most of the country and calls for masking increase.

The number of total fatalities attributed to the virus has exceeded 143,000, the Times reported.

On Wednesday, a record-breaking 12,807 new cases was enough to tip California’s total number past that of New York, once the world epicenter of the pandemic (though its per capita infection rate remains less than New York at its peak).

Nationwide daily virus deaths topped 1,000 fatalities Wednesday for the first time since May.

The troubling numbers come as calls for widespread use of face masks grows, with President Donald Trump, who has in the past downplayed the garment, calling their use “patriotic” in a tweet this week.

Labor Department numbers released Thursday showed unemployment claims over the past week have jumped for the first time since March, rising by upwards of 100,000 to total 1.4 million.

Around 230 million Americans are under a form of public masking mandate where they live, amounting to some 70% of the country, according to a Forbes analysis. A politically-charged garment for some, Americans on both sides of the aisle seem to be accepting of face masks mandates—a Politico/Morning Consult poll released this week found that 72% of voters surveyed would support a state mask mandate where they live, though Democrats identified as “strongly support[ing]” such an order roughly twice as much as Republicans, according to the survey.

President Donald Trump and inched closer to voicing support for masking during his first coronavirus briefing in months on Wednesday, saying, “Whether you like the mask or not, they have an impact, they’ll have an effect—and we need everything we can get,” Forbes reported.