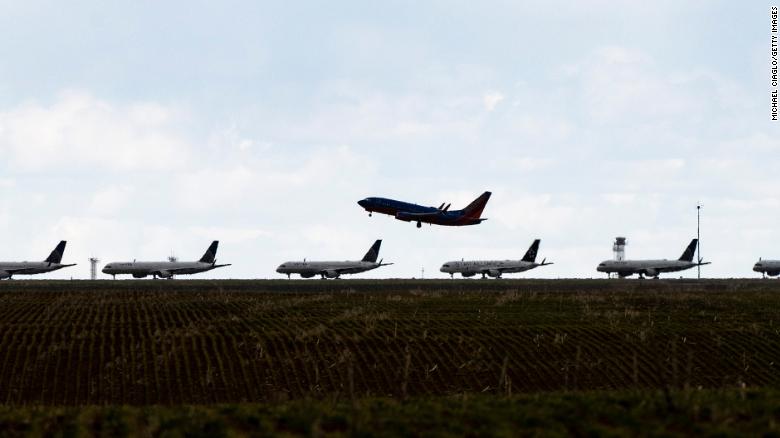 Restaurant reservations are waning. The rebound in air travel is leveling off. And foot traffic at stores is dwindling once again. There is mounting evidence that America’s fragile economic recovery is already stalling as the number of coronavirus infections and deaths spike.

Real-time economic indicators bottomed out in May as stay-at-home orders were lifted and many Americans felt safe enough to start visiting shopping centers, restaurants and even airports.
That gave hope, perhaps prematurely, of a rapid V-shaped recovery for the United States from the historic collapse caused by the pandemic.
But there is now a growing sense that the recovery is losing steam as coronavirus infections surge in California, Texas, Florida and other Sun Belt states.
“The premature reopening of the U.S. economy has resulted in an intensification of the pandemic, which is now causing growth in the economy to slow,” Joe Brusuelas, chief economist at RSM International, wrote in a note to clients Tuesday.
The stall of the fragile recovery comes as Congress debates whether the economy needs more stimulus — and if so, how much to provide. The $600 weekly enhanced unemployment benefits expire this month unless lawmakers take action.
Economists say there is nothing to debate: The recovery is faltering.
“Activity is now clearly contracting in COVID hot spots, including the Sun Belt and the West,” Aneta Markowska, chief economist at Jefferies, wrote in a report on Monday.
That is hardly surprising, given that 22 states have either reversed or paused their reopening due to health concerns.

This doesn’t mean the US economy will keep shrinking in the third quarter. Economists are still betting GDP will turn sharply positive after having collapsed by an estimated 34% during the second quarter. But now they worry that the forecasts for blockbuster growth may be overly optimistic.
For instance, S&P Global Economics warned Wednesday that its estimate for a surge in third quarter GDP at an annualized pace of 22.2% is “at risk of weakening” because of the health crisis.
“Although our base case is for a gradual recovery through next year,” S&P economists wrote, “the [recent] surge in COVID-19 and hospitalizations has raised concerns that a more likely scenario is that the COVID-19 recession has not bottomed out.”
The latest real-time economic indicators suggest those concerns are warranted.
More turbulence for air travel: The resurgence of coronavirus infections is derailing the travel industry’s modest recovery. The number of air passengers processed through TSA security lines fell during the week ended July 20, compared with the prior week, according to Bank of America. This metric is down more than 70% from a year ago.
United (UAL) CEO Scott Kirby told CNBC on Wednesday that the airline doesn’t “expect to get anywhere close to normal until there’s a vaccine that’s been widely distributed to a large portion of the population.”
Restaurant trouble: As the CNN Business Recovery Dashboard clearly shows, restaurant reservations on OpenTable have weakened in recent weeks. During March and April, as the pandemic wreaked havoc, reservations were down nearly 100% from a year ago. That figure rebounded to down “only” 50% in mid-June, but has since rolled over and stood at -65% as of Monday.
Foot traffic to Chipotle (CMG) was down 47% during the first week in June, according to Placer.ai, an analytics platform that uses anonymized location data. Traffic improved to down just 30% by the end of June, but has since “stagnated” through mid-July, Placer.ai said.
Retail slowdown: In April, US retail traffic declined by a staggering 98%, according to Cowen. Traffic steadily improved, with June traffic down 57%, but that rebound has stalled. US retail traffic fell 47% from a year ago during the second week of July, Cowen said, a slight deterioration from the first week in July when traffic was down 45%.
Small business shutdowns: As of Sunday, 24.5% of small businesses in the United States were closed, according to Jefferies. That is worse than late June, when only 19% were closed. Jefferies pointed to “particular weakness in COVID hot spots” and noted that small business employment had dropped to levels unseen since the end of May.
Weaker spending: After plunging by as much as 31% year-over-year in early April, purchases on credit cards issued by Synchrony turned positive in late June. However, Synchrony (SYF) said Tuesday that spending during the first two weeks of July was down 2%.
Unemployment website visits: Web traffic to state unemployment portals “leveled off at still-high levels, suggesting labor market momentum has stalled,” Jefferies said. That jibes with official government statistics in the CNN Business Recovery Dashboard that show unemployment claims have tumbled from their spike this spring but remain elevated. In fact, another 1.4 million Americans filed for first-time unemployment benefits last week — the first increase in weekly claims since late March.
“The spread of the virus since mid-June has clearly had an adverse effect on economic activity,” economists at Bank of America wrote in a note to clients Wednesday. “It is clear that the path of the economic recovery cannot be disentangled from the path of the virus.”

No vaccine, no recovery?

That’s not to say all real-time indicators are negative right now. For instance, Jefferies said one of the last metrics to bottom out, a US job listing index that the bank created with alternative data platform Thinknum, continued to improve even last week.
Still, the New York Federal Reserve’s weekly economic index, which is composed of metrics on the labor market, consumer behavior and goods production, dropped for the first time since hitting the pandemic low point in late April.
All of this raises stakes in the race to develop a vaccine that is effective against Covid-19.
Vaccine hopes, on top of unprecedented easy money from the Federal Reserve, have helped catapult the stock market. The S&P 500 has spiked 46% since the March 23 low and is now positive for the year.
Real progress is being made on the vaccine front, underscored by a $1.95 billion deal announced Wednesday for Pfizer (PFE) to produce millions of Covid-19 vaccine doses for the US government.
Yet healthcare execs remain more cautious than Wall Street. Seventy-three percent of healthcare industry leaders polled by Lazard estimate that a vaccine won’t be widely available until at least the second half of 2021.
“It is becoming quite clear that absent an accessible and widely distributed vaccine,” RSM’s Brusuelas said, “there will be no complete economic recovery.”