Dubai is proud to introduce its impressive fleet of the “world’s largest ambulances,” or “Mercedes-Benz large-capacity ambulances” which were created to give rapid medical assistance in the event of major emergencies with large numbers of causalities. These new emergency vehicles offer a fully-equipped, mobile clinic with an intensive-care unit and an operating room.

Equipped with an X-ray unit and ultrasonic equipment for further evaluation, each super ambulance bus carries 12,000 liters of oxygen, which ensures a dependable supply for up to three days. With the press of a button, oxygen masks fall from special holders, and the oxygen flow to each mask can be individually controlled.

They’re also equipped with an ECG and an InSpectra shock monitor, which monitors the oxygen saturation in tissue-matter and warns doctors of the onset of shock minutes before it occurs. This unit can also detect and monitor internal bleeding. If an emergency caesarian birth is needed, essential obstetrical instruments, including an incubator, are on board. 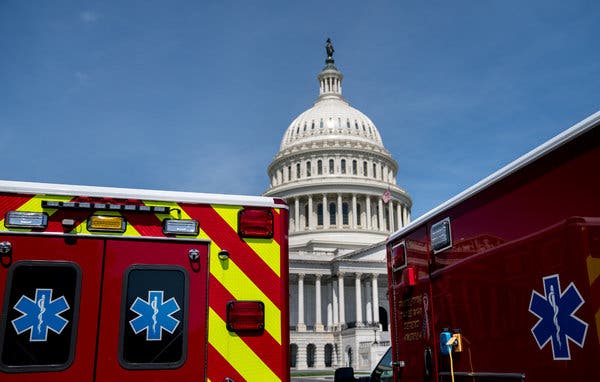 A legislative push in Congress and states to end unexpected medical bills has omitted the ambulance industry.

After his son was hit by a car in San Francisco and taken away by ambulance, Karl Sporer was surprised to get a bill for $800.

Mr. Sporer had health insurance, which paid for part of the ride. But the ambulance provider felt that amount wasn’t enough, and billed the Sporer family for the balance.

“I paid it quickly,” Mr. Sporer said. “They go to collections if you don’t.”

That was 15 years ago, but ambulance companies around the nation are still sending such surprise bills to customers, as Mr. Sporer knows well. These days, he oversees the emergency medical services in neighboring Alameda County. The contract his county negotiated allows a private ambulance company to send similar bills to insured patients.

In most parts of medical care, you can choose a doctor or hospital that takes your insurance. But there are some types of care where politicians have begun tackling the “surprise” bills that occur when, say, patients go to an emergency room covered by their insurance and are treated by a physician who is not.

Five states have passed laws this year to restrict surprise billing in hospitals and doctor’s offices. Congress is working on a similar package of measures, after President Trump held a news conference in May urging action on the issue.

But none of these new policies will protect patients from surprise bills like the one Mr. Sporer received. Ordinary ambulances that travel on roads have been left out of every bill.

“Ambulances seem to be the worst example of surprise billing, given how often it occurs,” said Christopher Garmon, a health economist at the University of Missouri-Kansas City. “If you call 911 for an ambulance, it’s basically a coin flip whether or not that ambulance will be in or out of network.”

Mr. Garmon’s research finds that 51 percent of ground ambulance rides will result in an out-of-network bill. For emergency room visits, that figure stands at only 19 percent.

Congress has shown little appetite to include ambulances in a federal law restricting surprise billing. One proposal would bar surprise bills from air ambulances, helicopters that transport patients who are at remote sites or who have life-threatening injuries. (These types of ambulances tend to be run by private companies.)

But that interest has not extended to more traditional ambulance services — in part because many are run by local and municipal governments.

Lamar Alexander, the chairman of the Senate Committee on Health, Education, Labor and Pensions, and a key author of a Senate surprise billing proposal, said in an email that surprise bills from air ambulances were the more pressing issue because federal law prevents any local regulation of their prices. “Unlike air ambulances, ground ambulances can be regulated by states,” said Mr. Alexander, a Republican from Tennessee. “And Congress should continue to learn more about how to best solve that problem.”

The ambulance industry has brought its case to Capitol Hill, arranging meetings between members of Congress and their local ambulance operators.

“When we talk to our members of Congress, what we really emphasize is that we’re a little different from the other providers in the surprise billing discussion,” said Shawn Baird, president-elect of the American Ambulance Association. “We have a distinct, public process. The emergency room isn’t subject to any oversight of that kind.”

Anthony Wright, executive director of Health Access California, worked on a 2016 California law to restrict surprise billing. Initially, he thought it made sense to include ambulances in that legislation.

“It’s our experience that ambulance providers bill quicker and are more aggressive in sending bills to collection,” Mr. Wright said. “If they’re being more aggressive, you might want legislation to deal with that one first.”

But obstacles quickly began to mount. Some were about policy, like whether California would need to offset the revenue local governments would lose.

Then there were the politics. “There is the political reality that it’s hard to go after an entire industry at once,” Mr. Wright said. “It’s hard to have a bill opposed by doctors and hospitals and ambulances. We did manage to get a strong protection against doctor billing, but that was an epic, brutal, three-year fight.”

The California law that passed in 2016 did not regulate ambulance prices.

Patient groups elsewhere also say they ran into political trouble. Of the five states that passed surprise billing regulations in 2019, only Colorado’s new law takes aim at ambulance billing — not by regulating it, but by forming a committee to study the issue.

“The surprise bills laws are hard enough to get,” said Chuck Bell, program director for advocacy at Consumer Reports, who worked to pass a Florida surprise billing law in 2016. “You’re struggling with health plans, hospitals and doctors and other provider groups. At a certain point you don’t want to invite another big gorilla in the room to further widen the brawl.”

On Capitol Hill, the ambulance services have been less aggressive than other health care providers in lobbying against their inclusion in reforms. But lawmakers have largely declined to even include them in the conversation.

Consumer advocates say the lack of state-level legislation has been a barrier.

“Since there are issues related to ambulances being run by municipalities, and, at the state level, there hasn’t been a lot of model law to inform federal law, I think that’s made some members hesitant to wade into that space,” said Claire McAndrew, the director of campaigns and partnerships at the health care consumer group Families USA.

Municipal governments often publish the prices of their ambulance services online, and they can range substantially. In Moraga and Orinda, in the Bay Area, the base rate for an ambulance ride is $2,600, plus $42 for each mile traveled. In Marion County, Fla., the most basic kind of ambulance ride costs $550, plus $11.25 per mile.

In many communities, there is no choice of ambulances.

Older patients are not charged such fees. Medicare, which also covers some people with disabilities, pays set prices for ambulance rides — a base rate of around $225 for the most typical type of care, in addition to a mileage fee — and forbids the companies to send patients additional bills.

In Bucks County, Pa., where it is $1,500 for a basic ambulance ride, in addition to $16 per mile, the emergency medical service gets 78 percent of its revenue from ambulance billing, according to Chuck Pressler, the executive director of the Central Bucks Emergency Medical Services. The rest of the budget comes from taxes raised by local cities and fund-raising drives.

“There is an expectation that we just plant money trees, that people should come in and work for free,” Mr. Pressler said of proposals to tamp down ambulance billing. “When was the last time you saw the police send out a fund-raiser? They don’t have to do that. Why do we have to raise money to come get you when you’re sick?”