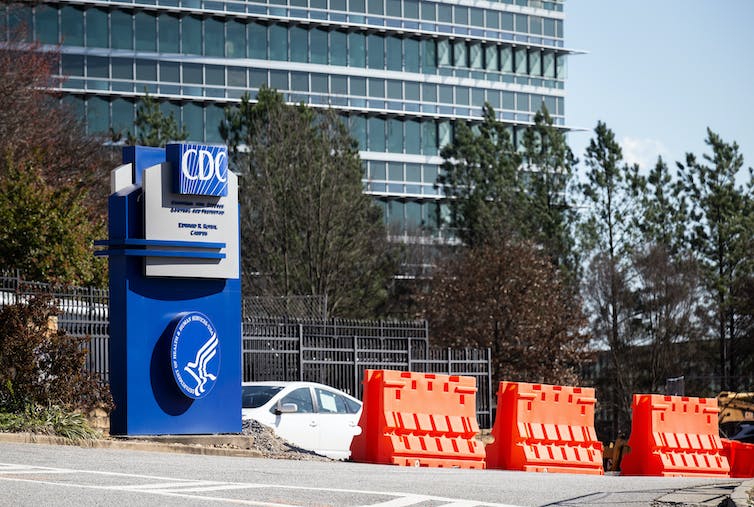 As the coronavirus pandemic exerts a tighter grip on the nation, critics of the Trump administration have repeatedly highlighted the administration’s changes to the nation’s pandemic response team in 2018 as a major contributor to the current crisis. This combines with a hiring freeze at the Centers for Disease Control and Prevention, leaving hundreds of positions unfilled. The administration also has repeatedly sought to reduce CDC funding by billions of dollars. Experts agree that the slow and uncoordinated response has been inadequate and has likely failed to mitigate the coming widespread outbreak in the U.S.

As a health policy expert, I agree with this assessment. However, it is also important to acknowledge that we have underfunded our public health system for decades, perpetuated a poorly working health care system and failed to bring our social safety nets in line with other developed nations. As a result, I expect significant repercussions for the country, much of which will disproportionately fall on those who can least afford it.

Spending on public health has historically proven to be one of humanity’s best investments. Indeed, some of the largest increases in life expectancy have come as the direct result of public health interventions, such as sanitation improvements and vaccinations.

Even today, return on investments for public health spending is substantial and tends to significantly outweigh many medical interventions. For example, one study found that every US$10 per person spent by local health departments reduces infectious disease morbidity by 7.4%.

However, despite their importance to national well-being, public health expenditures have been neglected at all levels. Since 2008, for example, local health departments have lost more than 55,000 staff. By 2016, only about 133,000 full-time equivalent staff remained. State funding for public health was lower in 2016-2017 than in 2008-2009. And the CDC’s prevention and public health budget has been flat and significantly underfunded for years. Overall, of the more than $3.5 trillion the U.S. spends annually on health care, a meager 2.5% goes to public health.

Not surprisingly, the nation has experienced a number of outbreaks of easily preventable diseases. Currently, we are in the middle of significant outbreaks of hepatitis A (more than 31,000 cases), syphilis (more than 35,000 cases), gonorrhea (more than 580,000 cases) and chlamydia (more than 1,750,000 cases). Our failure to contain known diseases bodes ill for our ability to rein in the emerging coronavirus pandemic.

Yet while we have underinvested in public health, we have been spending massive and growing amounts of money on our medical care system. Indeed, we are spending more than any other country for a system that is significantly underperforming.

To make things worse, it is also highly inequitable. Yet, the system is highly profitable for all players involved. And to maximize income, both for- and nonprofits have consistently pushed for greater privatization and the elimination of competitors.

As a result, thousands of public and private hospitals deemed “inefficient” because of unfilled beds have closed. This eliminated a significant cushion in the system to buffer spikes in demand.

At any given time, this decrease in capacity does not pose much of a problem for the nation. Yet in the middle of a global pandemic, communities will face significant challenges without this surge capacity. If the outbreak mirrors anything close to what we have seen in other countries, “there could be almost six seriously ill patients for every existing hospital bed.” A worst-case scenario from the same study puts the number at 17 to 1. To make things worse, there will likely be a particular shortage of unoccupied intensive care beds.

Of course, the lack of overall hospitals beds is not the most pressing issue. Hospitals also lack the levels of staffing and supplies needed to cope with a mass influx of patients. However, the lack of ventilators might prove the most daunting challenge.

While the U.S. spends trillions of dollars each year on medical care, our social safety net has increasingly come under strain. Even after the Affordable Care Act, almost 30 million Americans do not have health insurance coverage. Many others are struggling with high out-of-pocket payments.

To make things worse, spending on social programs, outside of those protecting the elderly, has been shrinking, and is significantly smaller than in other developed nations. Moreover, public assistance is highly uneven and differs significantly from state to state.

And of course, the U.S. heavily relies on private entities, mostly employers, to offer benefits taken for granted in other developed countries, including paid sick leave and child care. This arrangement leaves 1 in 4 American workers without paid sick leave, resulting in highly inequitable coverage. As a result, many low-income families struggle to make ends meet even when times are good.

Can the US adapt?

I believe that the limitations of the U.S. public health response and a potentially overwhelmed medical care system are likely going to be exacerbated by the blatant limitations of the U.S. welfare state. However, after weathering the current storm, I expect us to go back to business as usual relatively quickly. After all, that’s what happened after every previous pandemic, such as H1N1 in 2009 or even the 1918 flu epidemic.

The problems are in the incentive structure for elected officials. I expect that policymakers will remain hesitant to invest in public health, let alone revamp our safety net. While the costs are high, particularly for the latter, there are no buildings to be named, and no quick victories to be had. The few advocates for greater investments lack resources compared to the trillion-dollar interests from the medical sector.

Yet, if altruism is not enough, we should keep reminding policymakers that outbreaks of communicable diseases pose tremendous challenges for local health care systems and communities. They also create remarkable societal costs. The coronavirus serves as a stark reminder.

Health insurance companies are not concerned yet that the new coronavirus is going to drive up their medical claims and spending, Axios’ Bob Herman reports.

The big picture: More people will need expensive hospitalizations to treat COVID-19, which has turned into a full-blown public health emergency.

Between the lines: A lot more cases and hospitalizations are coming. But those will be partially offset, from an actuarial perspective, by delays or cancellations of costly elective procedures like joint replacements — something that hospitals are starting to do.

The bottom line: The coronavirus is throttling almost every business in America. Large insurers think they’re mostly immune, and if medical claims start to rise uncontrollably, they will increase everyone’s premiums next year. 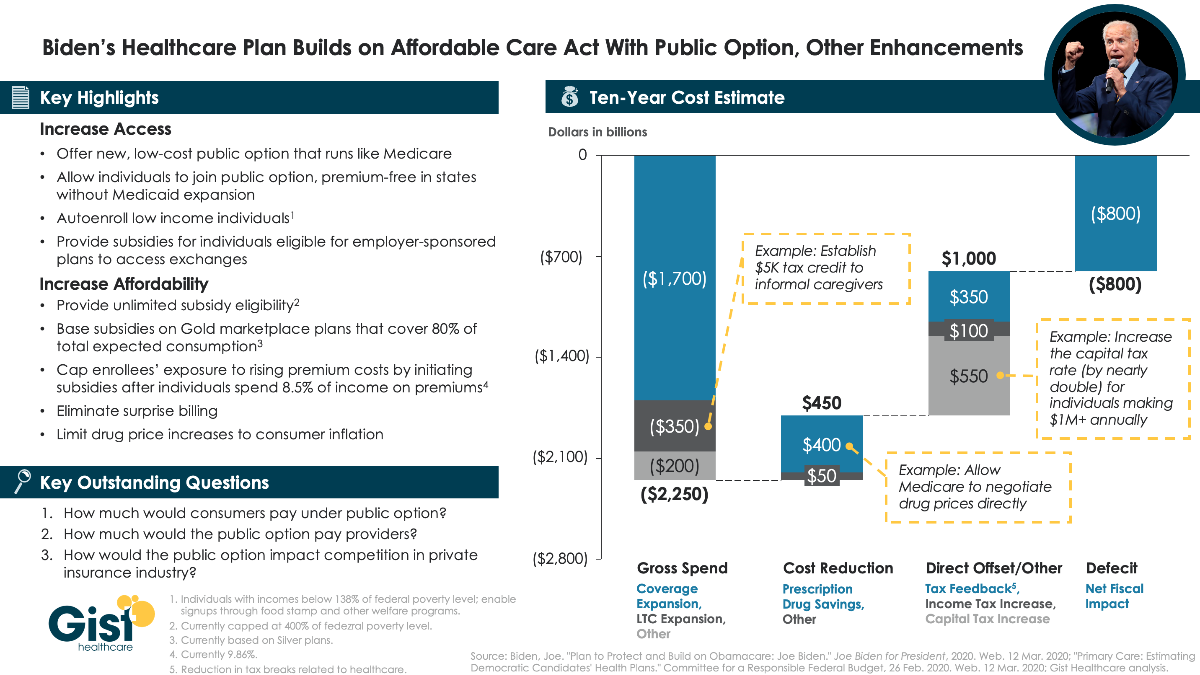 Now that the Democratic primary campaign has produced a clear front runner, it’s worth examining Joe Biden’s healthcare plan, which aims to expand the Affordable Care Act (ACA) by increasing access and affordability. As the graphic above highlights, former Vice President Biden has a broad—if at this point, still fairly high-level—proposal that includes a Medicare-like public option along with a variety of other ACA tweaks that aim to offer consumers more options and lower their healthcare costs.

These include allowing individuals in states without Medicaid expansion to join the pubic option premium-free, providing unlimited subsidy eligibility, and limiting drug price increases to the level of consumer inflation.

An independent analysis projects Biden’s plan would cost $2.25T and add an additional $800B to the deficit over 10 years. While large at first blush, these costs pale in comparison to Sen. Bernie Sanders’ Medicare for All plan, which would add a projected $12.95T to the deficit over the same period.

A public option offered at a significant discount has the potential to drive private plans out of business, which some project could eventually result in Medicare for All as an ultimate consequence. The devil will, as always, be in the details.

Aliera, founded in 2011 and based in Georgia, and Trinity allegedly trained sales agents to promote misleading advertisements to consumers, peddling products that don’t cover pre-existing conditions, abortion, or contraception. The shoddy coverage also doesn’t comply with the federal Mental Health Parity and Addiction Equity Act and the ACA.

The deceptive advertising could have pressured some Californians to buy a health sharing ministry plan because they believed they missed the deadline for buying coverage through Covered California, the state’s official insurance marketplace.

“Consumers should know they may be able to get comprehensive coverage through Covered California that will protect their health care rights,” California Insurance Commissioner Ricardo Lara said in a statement.

HCSMs, which began cropping up more than two decades ago as a low-cost alternative approach to managing growing medical costs, operate either by matching members with those who need help paying medical bills or sharing costs on a voluntary basis. They’re often cheaper than traditional insurance, but they don’t guarantee payment of claims, rarely have provider networks, provide limited benefits and usually cap payments, which can saddle beneficiaries with unexpected bills.

About 1 million Americans have joined the groups, according to the Alliance of Health Care Sharing Ministries.

At least 30 states have exempted HCSMs from state regulation, according to the Commonwealth Fund, meaning the ministries don’t have to comply with health insurance requirements. California does not exempt the religious-based groups from the state insurance code.

In January, Aliera and its subsidiaries, which includes Trinity, were banned from marketing HCSMs in Colorado after being accused of acting as an unlicensed insurer. One month later, Maryland issued a revocation order against Aliera for trying to sell an unauthorized plan in the state. Earlier this month, Connecticut issued a cease and desist order for conducting an insurance business illegally.

“We will utilize all available opportunities to address the false claims being made about the support and management services we provide to Trinity HealthShare and other health care ministries we represent,” Aliera said.

The state can impose a fine of up to $5,000 a day for each day the two continue to do business, along with other financial penalties.