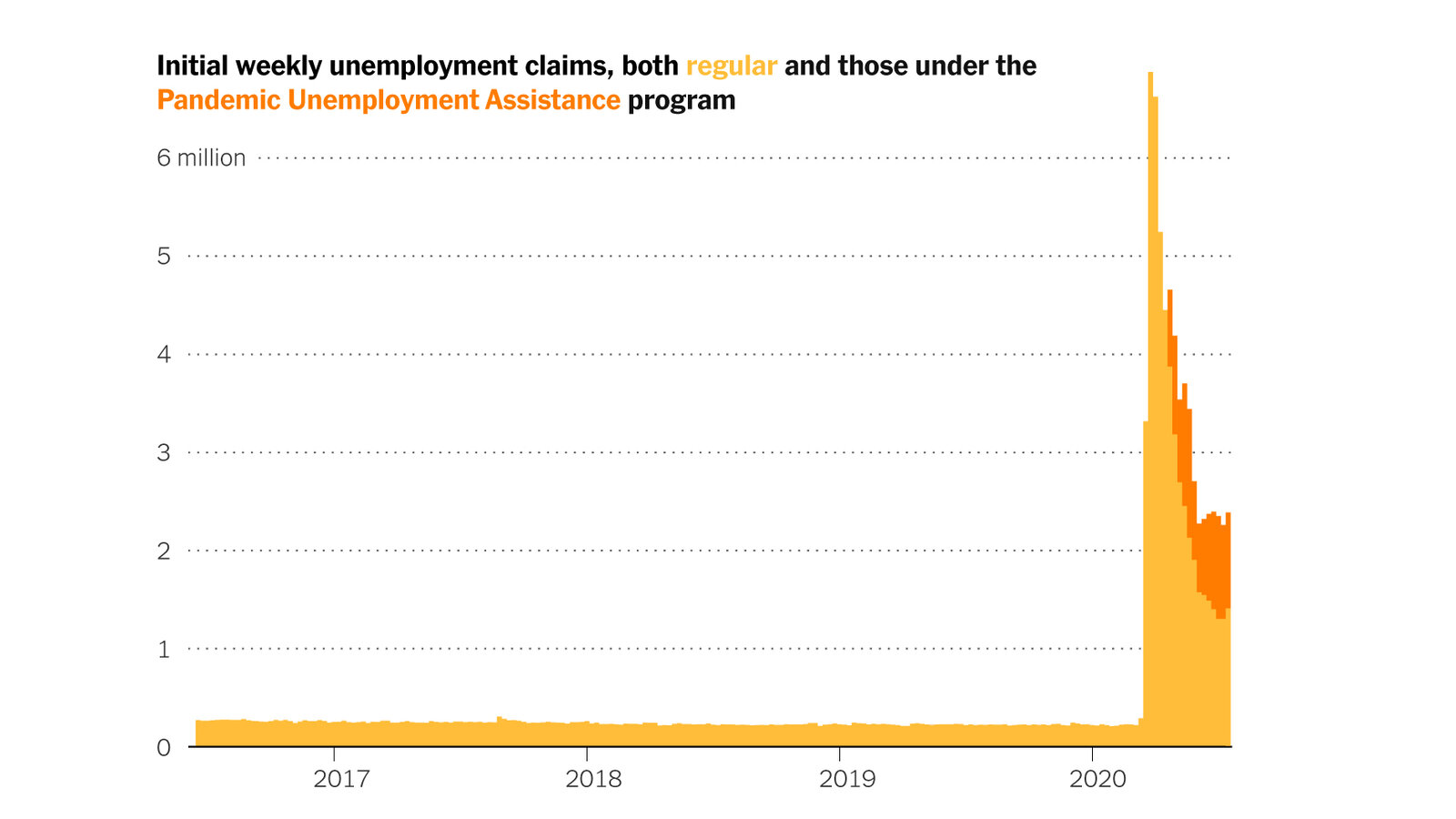 Just over one million Americans filed new claims for state jobless benefits last week, the latest sign that the economy is losing momentum just as federal aid to the unemployed has been pulled away.

Weekly claims briefly dipped below the one million mark early this month, offering a glimmer of hope in an otherwise gloomy job market. But filings jumped to 1.1 million the next week, and stayed above one million last week, the Labor Department said Thursday.

Another 608,000 people filed for benefits under the federal Pandemic Unemployment Assistance program, which offers aid to independent contractors, self-employed workers and others not covered by regular state programs. That number, unlike the figures for state claims, is not seasonally adjusted.

Other recent indicators also suggest that the recovery is faltering. Job growth slowed in July, and real-time data from private-sector sources suggests that hiring has slumped further in August. On Tuesday, American Airlines said it will furlough 19,000 workers on Oct. 1, the latest in a string of such announcements from major corporations.

“It is worrying because it does signal that these large companies are pessimistic about the state of the recovery and don’t think that we are going to be returning to normal anytime soon,” said Daniel Zhao, senior economist at the career site Glassdoor.

Unemployment filings have fallen sharply since early April, when 6.6 million applied for benefits in a single week. But even after that decline, weekly filings far exceed any previous period. Close to 30 million Americans are receiving benefits under various state and federal programs.

The rate of job losses remains high as government support for the unemployed is waning. A $600-a-week federal supplement to state unemployment benefits expired at the end of July, and efforts to replace it have stalled in Congress. President Trump announced this month that he was using his executive authority to give jobless workers an additional $300 or $400 a week, but few states have begun paying out the new benefit.

Economists warn that the loss of federal support could act as a brake on the recovery. Nancy Vanden Houten, lead economist for the forecasting firm Oxford Economics, estimated that the lapse in extra unemployment benefits would reduce household income by $45 billion in August. That could lead to a drop in consumer spending and further layoffs, she said.

The benefit initiated by Mr. Trump would use federal emergency funds to provide $300 a week in extra payments to most unemployed workers. (States can choose to chip in an additional $100 a week, but few are doing so.) As of Wednesday, 34 states had been approved for grants under the program, known as Lost Wages Assistance.

Arizona, the first state to turn the grants into payments, sent $252.6 million to about 400,000 recipients last week, a sum that included retroactive payments for the first two weeks of August. Texas this week has paid out $424 million and expects to deliver nearly $1 billion more to cover the first three weeks of benefits. A handful of other states are paying benefits or expect to begin doing so within days.

Most, however, said it could take until mid-September or later.

Once the money starts flowing, it may not last long. Mr. Trump’s order authorized spending up to $44 billion, which federal officials said last week would cover four or five weeks of payments. That means jobless workers in many states may receive a lump sum covering several weeks of retroactive benefits, but nothing more without congressional action.

The wait for the $300 benefit can depend on a state’s computers. 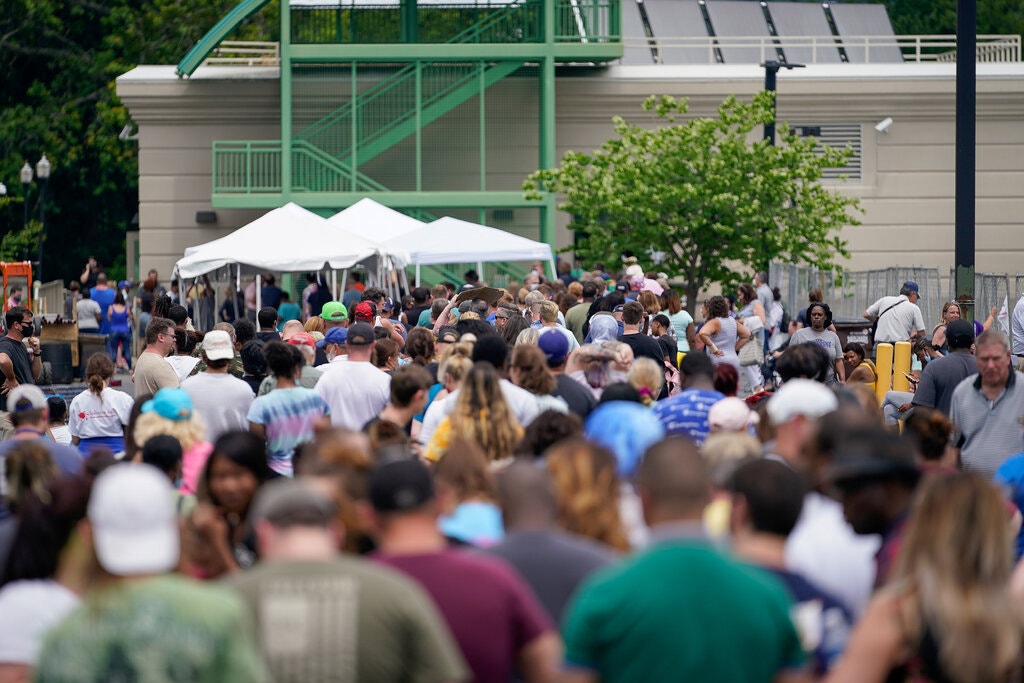 A crowd thronged a temporary unemployment office in Kentucky in June. Adapting computer systems to new benefits has been a crucial factor in processing claims.

On the surface, the new lost wages program looks like the earlier $600-a-week federal supplement, just cut in half. But there are subtle differences: The program has a different funding source (the Federal Emergency Management Agency instead of the Labor Department) and new restrictions (people receiving less than $100 a week in regular benefits don’t qualify).

Those kinds of adjustments would be trivial on a modern computer system. But many state unemployment systems are running on computers that are anything but modern.

In Oklahoma, for example, the unemployment system uses a 40-year-old mainframe computer that turns even minor adjustments into a major programming task. As a result, even though the state was among the first to apply for the $300 benefit this month, it doesn’t expect to begin paying the new benefit until late September.

“The fact that I’m working with a mainframe from 1978 to process claims is just crippling to the agency,” said Shelley Zumwalt, interim executive director of the agency that oversees Oklahoma’s unemployment system. “We are just holding that system together with masking tape and chewing gum.”

When the pandemic hit, Arizona, too, was stuck with archaic computer systems. It built a new system virtually from scratch to begin paying out federally funded emergency benefits, and it was among the last states to do so.

But the approach left Arizona better able to handle curveballs like the new $300 benefit.

“Through that chaos, we created a pandemic unemployment system,” said Michael Wisehart, director of the Arizona Department of Economic Security.

Since the $600-a-week benefit lapsed, her savings have been dwindling.

Christy Miller says there are three things that shape her identity: making people laugh, making people strong and lifting heavy objects. She can’t do any of those right now, and she isn’t sure when she will be able to again.

Ms. Miller, 49, is a standup comedian in New York, where comedy clubs have been closed since March. She is also a personal trainer and an amateur power lifter — activities she has had to give up because gyms, too, remain closed in the city.

The $600-a-week supplement to her unemployment pay didn’t just allow her to pay rent and buy food. It also freed up the time and mental energy for her to learn video production, podcasting and other skills to help her survive the pandemic-driven shutdown of her industry.

“I would give up the $600 a week any day for this coronavirus to go away and get back to work,” she said. “But the $600 has allowed me not to be homeless, to learn more computer stuff that I never would have learned or had the time to learn.”

None of those ventures are producing much income yet, though. She saved as much of her unemployment benefits as she could, and has enough to cover rent through the end of the year. But other bills are another matter. And there is little guarantee that her business will bounce back before her savings run out.

“If they don’t fix this pandemic thing, I may have to leave New York because I can’t afford to stay here,” she said.

Even getting back to work doesn’t always bring security.

Kris Fusco is finally back at work. That doesn’t mean her coronavirus worries are behind her.

When Ms. Fusco’s employer — a small, family-owned business in Massachusetts that rents musical instruments to students — laid her off in March, she expected to be out of work for a couple of weeks. That got extended to April, then to June. Eventually one of the owners called her to tell her they didn’t know when they could reopen.

“I said, ‘You do what you need to do to keep your business afloat, and I’m just going to hold on as long as I can,’” she said. Fortunately, her employer called her back shortly after the $600 supplement expired. She returned to work last week, and, despite some nervousness about going into the office with the virus still spreading, she said she was grateful for the paycheck.

But Ms. Fusco, 50, doesn’t know how long her good fortune will last. With many schools still teaching remotely or canceling activities like band, she worries that her company’s business will suffer. Already, she has noticed a large number of instruments being returned.

“It’s very worrisome for me because I can see the snowball effect from Covid-19 all around me,” she said. “It’s always lurking right behind my eyeballs that in six months I might be out of a job again.”