Another challenging year defined by the continued COVID-19 fight and vaccination drives has created a unique healthcare landscape. Pandemic-induced telehealth booms, continued strain due to understaffing and pressure from big tech disruptors are just some of the issues that have presented themselves this year.

Here are five major trends that hospitals and health systems may see in 2022. While some present challenges, others present significant opportunities for healthcare facilities.

Record numbers of workers have quit their jobs in 2021, with some 4.4 million people quitting in September. That means that 1 in 4 people quit their jobs this year across all industries. Around 1 in 5 healthcare workers have left their positions, creating issues with understaffing and lack of resources in hospitals and health systems. Stress, burnout and lack of balance have all been cited as reasons for staff leaving their roles. An increase in violence toward medical professionals, continued COVID-19 surges and low pay and benefits have contributed to the exodus of healthcare workers. None of those problems seems poised to disappear come 2022, so the new year could bring continued workforce and staffing challenges.

Big tech and retail giants have continued their push into healthcare this year. Companies like Apple, Amazon and Google stepped up their game in the wearables market. Pharmacy and retail chains Walmart and CVS Health both detailed their intended expansions into primary care. The pandemic also encouraged big corporations outside the healthcare sector, like Pepsi and Delta Airlines, to consider hiring CMOs to make sense of public health regulations guide them on their policy. These moves all mean there is a tightening of competition for the top physicians and hospital executives. Going into 2022, health systems may be under pressure to hang onto top talent and keep patients from using other convenient health services offered by retail giants.

The unequal toll of the pandemic on people of color both medically and economically helped shed a light on the rampant inequities in American healthcare and society at large. Indigineous, Black and Hispanic people were much more likely than white or Asian people to suffer severe illness or require hospitalization as a result of COVID-19. Increasing numbers of hospitals, health systems and organizations are starting initiatives to advance health equity and focus on the socioeconomic drivers of health. The American Medical Association launched a language guide to encourage greater awareness about the power of language. Z-code usage has also been encouraged by CMS to increase knowledge and data about the social determinants of health. Next year, the perspective of health as holistic instead of just a part of an individual’s life will continue, with special attention being paid to social drivers.

The pandemic helped the telemedicine industry take off in a big way. Telehealth was often the only healthcare option for many patients during the height of the lockdown measures introduced during the pandemic. Despite a return to in-person visits, telehealth has retained its popularity with patients. Some advocates argue that telehealth can help increase access to healthcare and improve health equity. About 40 percent of patients said that telehealth makes them more engaged and interact more frequently with their providers. However, while Americans see telehealth as the future of healthcare, a majority still prefer in-person visits. Regardless of patient opinion, telehealth will remain a key part of health strategy. In late December, the FCC approved $42.7 million in funding for telehealth for 68 healthcare providers. This suggests that there are investments and subsidies available in the future for health systems to bolster their telehealth services.

At the 2021 UN Climate Conference, Cop26, in Glasgow, Scotland, hospitals and health systems acknowledged the role they have to play in mitigating the effects of climate change. Hospitals and health systems shed light on the health-related effects of climate change, such as illness and disease from events like wildfires and extreme weather. Health systems are also becoming more aware of their own contributions to climate change, with the U.S. healthcare system emitting 27 percent of healthcare emissions worldwide. To that end, HHS created an office of climate change and health equity that will work alongside regulators to reduce carbon emissions from hospitals. More health systems too are taking charge and pledging net neutrality and zero carbon emissions goals, including Kaiser Permanente and UnitedHealth group. It’s expected that more systems will follow suit in the coming year and make more concrete plans to address emissions reduction.

Research suggests the United States is the highest contributor to the global healthcare climate footprint. The healthcare industry accounts for 8.5 percent of all greenhouse gas emissions in the U.S.. Worldwide, the healthcare industry is responsible for 4.4 percent of net emissions, which is the equivalent of 514 coal-fired power plants, according to a 2019 report from Arup and Health Care Without Harm, a group dedicated to achieving more sustainable healthcare practices.

The medical supply chain accounts for 71 percent of healthcare’s carbon footprint. Excess waste is created from plastic gloves, surgical supplies, medicine containers and gowns, among other materials. If the American healthcare sector were its own country, it would be the 13th largest source of greenhouse gas emissions in the world, according to a column by Baltimore-based Johns Hopkins physicians.

A 2010 study estimated that each occupied U.S. hospital bed created 33.8 pounds of waste per day. Hospitals also dispose of 2 million pounds of supplies that have never been used, which costs them $15 million each year.

A study by the National Health Service in England found that 2 to 3 percent of its carbon footprint is created by inhaled anesthetic gases. The drugs are vented through hospital rooftops and can be destructive to the ozone layer. Despite the potential consequences of releasing the gases into the atmosphere, the U.S. has no regulations on how to dispose them. 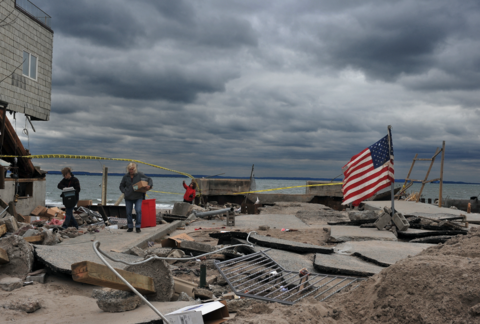 From deaths and injuries caused by extreme heat and stronger storms to longer growing seasons linked to an increased risk of mosquito- and tick-borne illnesses and wildfires, the healthcare impacts of climate change are costing the U.S. billions, a new analysis found.

Case in point: An analysis of a single year—2012—by researchers at the Natural Resource Defense Council and the University of California, San Francisco (UCSF) estimated a total of 10 climate-sensitive events in the U.S. that ultimately cost $10 billion.

That estimate stems from costs associated with 917 deaths, 20,568 hospitalizations and 17,857 emergency room visits, researchers said in the study published in the journal GeoHealth.

Among the costs connected to “climate-sensitive events” in 2012, researchers pointed to:

They acknowledged several limitations of the study. For instance, they said, “despite record-setting weather conditions across the U.S. in 2012, our analysis was restricted to case studies for which there was adequate documentation of health impacts,” they said.

They only included mental health impacts from Hurricane Sandy despite evidence that other events like wildfires can also adversely impact mental health. They also said extreme heat and Lyme disease are routinely underreported health effects that could result in conservative estimates.

“As such, the $10 billion total we calculated is likely a conservative estimate of health-related costs for these studies,” researchers said in this study.

Still, these costs are not just theoretical, but tangible costs that should be factored into the policy conversation, said Wendy Max, co-director of the Institute for Health & Aging at UCSF.

“We wanted to look at who bears this cost and we found two-thirds of the cost are borne by the Medicaid and Medicare programs,” Max said. “In an era of concern about healthcare costs, this is an important message: Climate change is adding to the public healthcare cost burden. That’s a message we’re hoping will resonate with policymakers.”