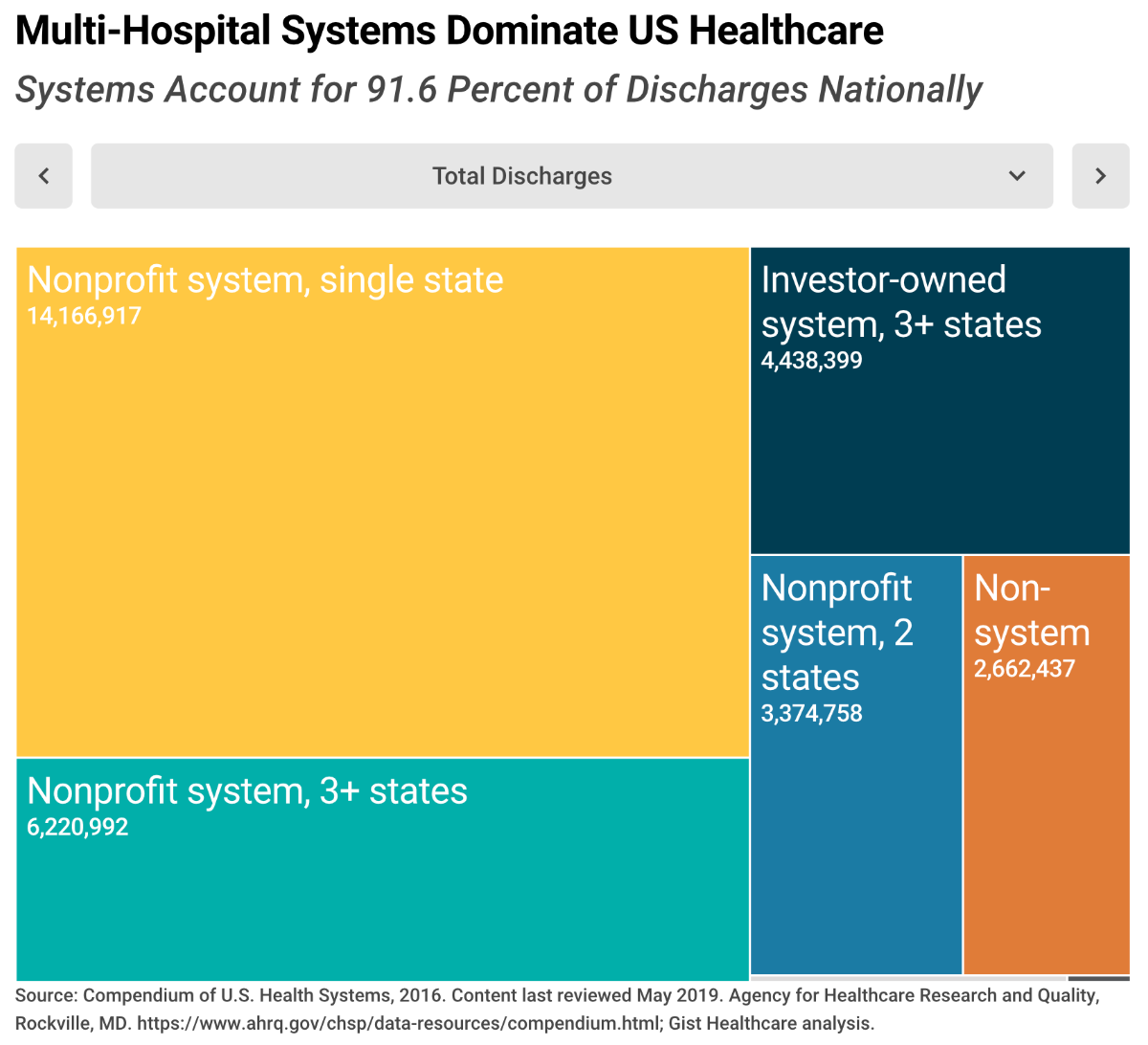 As much discussion as there’s been about consolidation in the hospital industry recently, there are surprisingly few good sources of data on the scope and scale of multi-hospital systems in the US. One very helpful resource is the Compendium of US Health Systems, a project sponsored by the Agency for Healthcare Quality and Research (AHRQ), which is part of the Department of Health and Human Services (HHS).

First launched in 2016, the compendium includes downloadable data on 626 health systems, with information about location, number of beds, number of discharges, and other key characteristics. This spring, AHRQ supplemented the data set with new information about participation in payment reform pilots and provider-sponsored health plan activity. Drawing on this information, we constructed the interactive graphic below—click on the chart or follow this link to explore the data. A few highlights indicate how consolidated the hospital sector has become.

Health systems account for more than 90 percent of all discharges in the US, with the largest 11 systems accounting for a quarter of discharges, and the largest 67 accounting for half. Nonprofit systems dominate the landscape, and many of those are multi-state enterprises. And the trend toward consolidation continues apace. When AHRQ first released the data set in 2016, there were 626 systems on the list; the last two years have seen that number decrease to 591, with several large systems merging together. We’ll continue to mine this rich resource for more insights in the weeks to come.

What makes us healthy?

We have an intuitive sense that things like what we eat, how much we exercise, the quality of our water and air, and getting appropriate health care when sick all help us stay healthy, but how much do each of these factors matter?

Studies have also shown that our incomes, education, even racial identity are associated with health — so-called “social determinants of health.”

How much do social determinants matter? How much does the health system improve our health?

In the 1970s the Centers for Disease Control and Prevention tried to answer these questions but had little rigorous science to guide it. Though we know a great deal more today, they still have not been fully answered. This is no mere curiosity — knowing what makes us healthy will help us direct investments into the right programs.

Over the years, many frameworks have been developed to illuminate what affects health. The relationships are so complex that no single framework captures everything. To get us started on this research project — and our broader conversation about what drives health — we created a model that allows us to explore some of the dimensions of these drivers, and their relationships to each other.

We developed our framework by reviewing research on factors that influence health and surveying similar projects and tools from prominent organizations . It is not meant to be complete, but a starting point that allows us to think about what drives health and how.

Why these Outcomes?
There are many possible health outcomes. The framework includes four examples—age-adjusted mortality, life expectancy, quality of life/well-being, and functional status. These outcomes are commonly studied, prevalent in the literature, and reflect the kinds of things people care most about.

Government/Policy
A wide range of government policies can affect health. For example, in 2007, Australia became the first country to introduce a government-funded human papillomavirus (HPV) vaccination program. For years later, significantly lower levels of HPV were present in the population. As another example, studies show that Medicaid expansion in the US facilitates access to care and improves self-reported health outcomes. Policies outside the health system can affect health too. Those pertaining to deportation of undocumented immigrants and same-sex marriage have been linked to health outcomes, for example.

Income/Wealth
Income and wealth are associated with health, but through complex pathways. While income and wealth facilitate access to health care, food, and housing, it’s also true that good health facilitates labor force participation, potentially leading to higher income. Several studies suggest that income and resources have profound effects in early life and development, but a much smaller effect on adults.

Education
Evidence suggests that education has a causal effect in reducing mortality. Among all age groups, every additional year of school is associated with increased self-reported health status.

Racial Identity
Racial Identity is closely associated with health outcomes in the US. For example, African-American adults experience much higher levels of mortality than white adults, from all causes. Racial Identity also plays a role in the accumulated stress from discrimination and in the quality of health care received.

Gender Identity
Evidence suggests that gender identity plays a role in health and health care. For example, one study found that women with angina pectoris and low socioeconomic status were referred to cardiologists less frequently than men.

Genetics
Genetics play a role in the development of certain disease. For example, while cancer is not caused by genetics, most cancers have some genetic determinants. The BRCA1 and BRCA2 genes play a role in tumor suppression, and, when mutated, increase the risk of female breast, ovarian, and other cancers.

Environment
Environmental factors — natural and built — have profound effects on our health. Of course, factors like air quality affect our health, evidenced by a study that demonstrated an association between higher levels of air pollutants O3 and PM2.5 and pediatric pneumonia. Environmental conditions even before birth (present during fetal development) can affect health and well-being into adulthood.

Medical Care
Medical care is designed to facilitate good health, so both the quality of medical care and access to it influence our health outcomes. One study found that the medically uninsured receive 20% less care after auto accidents and have significantly higher mortality rates than people who are insured.

Health Behaviors
Health behaviors encompass a wide range of human behaviors that affect health including: physical activity; diet; sleep; and tobacco, alcohol, and other substance use. Just as one example, reducing exposure to tobacco has been identified as the single biggest way to prevent morbidity, disability, and early death.

Social Circumstances
Social relationships can affect mental and physical health as well as behaviors and mortality risk. The people we are surrounded by (at an early age, parents, and later in life, peers and romantic partners) strongly influence health through mechanisms of stress, social support, and pressure to engage in or avoid risky behaviors.

Historical vs. Current, Marginal Effects
When attempting to quantify the impact of direct health-related factors, it is important to make a distinction between how much of our current health is related to these factors versus how much of our current health can be improved by interventions that target particular factors. Grasping this distinction is critical so that we know where our dollars are best spent to maximize health improvement. In other words, how much have each of these factors affected our health in the past through today versus how much could they affect health in the future if policy was immediately changed? For example, a disease like smallpox has a huge direct effect on health outcomes, but it has essentially been eradicated, so an additional investment in eradicating smallpox has virtually no marginal gains, even though the disease is closely linked to health.

Timespan
It is also relevant to consider the timespan on which we see certain effects taking place, especially when considering policy intervention. For example, with an environmental change such as improving the air quality, it would take a significant amount of time for all measurable changes in health outcomes to manifest; other interventions, such as dramatically increasing flu vaccination rates, could have significant health outcomes that would be observable on a much shorter timescale.

Correlations vs. Causation
Considering the available literature on social determinants of health and the links between these factors and measurable health outcomes, it is critical to clarify whether what we are observing or seeking is a correlation or causation. Correlations can guide hypothesis generation, but only causation is actionable in terms of policy.